Yesterday, Miss Cupcake turned three. How did that happen? She was just born the other day, I swear. I blinked and now she's three.

Have you heard of Red Knit Cap Girl  and Red Knit Cap Girl to the Rescue? If you have little ones in your life you must check them out. The art work is so pretty, I want to frame every page. These books have delighted Miss Cupcake and captured her imagination since we were first introduced to them. We decided to bring these lovely little stories to life for her birthday since Cupcake is a huge Naoko Stoop fan. There is a third book, Red Knit Cap Girl and the Reading Tree,  coming out that we can't wait to arrive (thank you, Auntie Jessica and Uncle Sean!), and these two board books, All Creatures Great and Small and Noah's Ark,  also illustrated by Naoko Stoop are must-have items in Cupcake's Mass bag every Sunday.

I wanted to make a larger version of the adorable little doll Jessica painted for Cupcake back last Christmas. And I wanted Sunshine to try to make a real knitted cap for her. Sean helped whittle down the bottom of a standard 3 inch peg doll form in order to create the look of a short coat and boots. I painted a cap on her head, just in case, but Sunshine's fit perfectly. 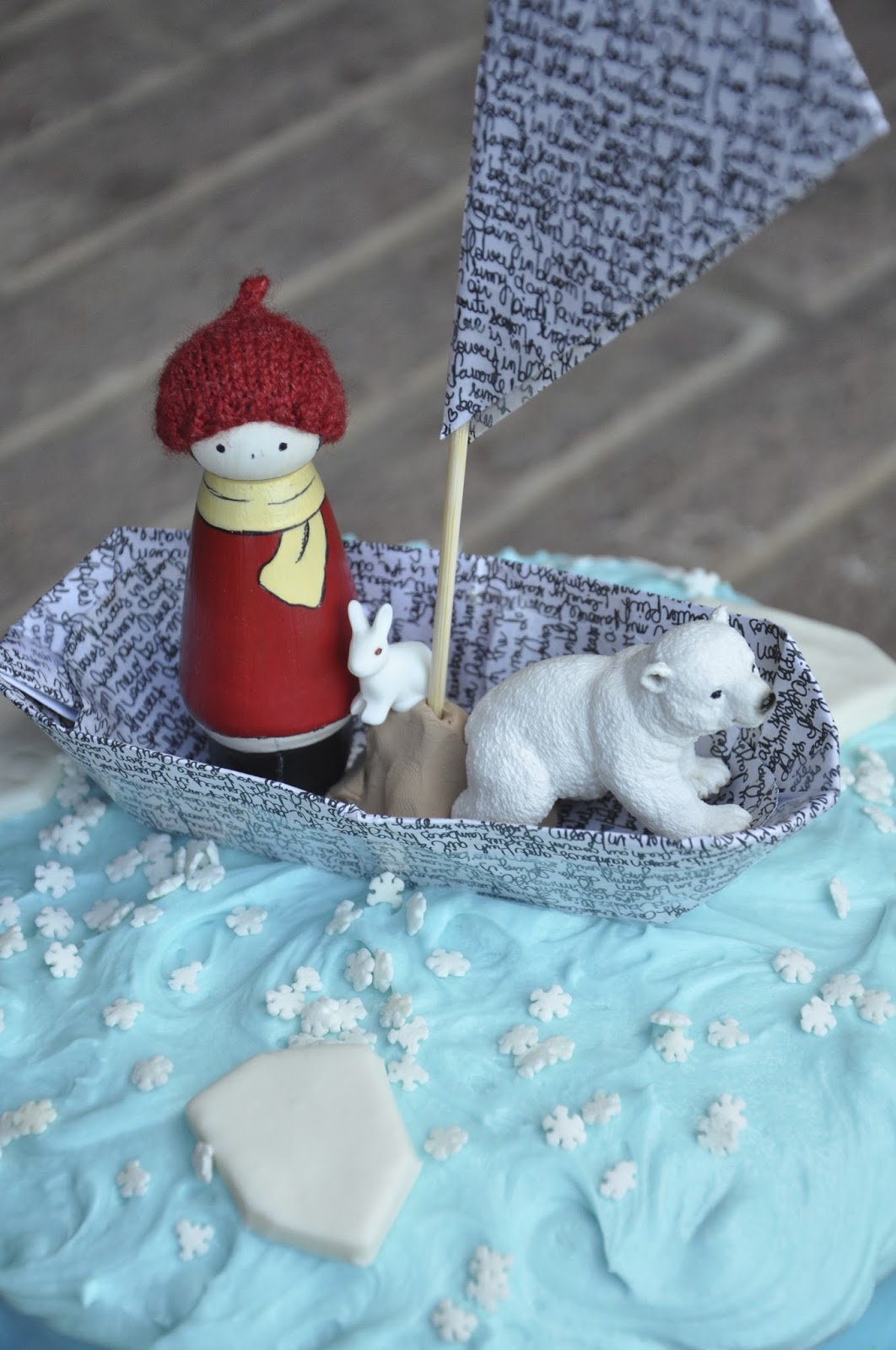 I started with the cake. One of the cakes I considered for BigBoy's Narnia themed birthday was this beautiful representation of Reepicheep paddling his coracle to Aslan's Country. I wanted to recreate the scene with Red Knit Cap Girl, White Bunny and Polar Bear Cub sailing north so I found some paper that looked similar to the paper used in the books. I even sent Naoko Stoop an email asking if the paper folded boat was a real one or her own imaginative design. She wrote back! Squeeeee!!! I love it when authors do that. She said the design was her creation but sent me a helpful little drawing and message for Cucpake. I used this website's instructions for a paper boat (scroll down to the pink one) with some of my own modifications and used a skewer for the sail anchoring it into a chunk of Sculpey.

I wanted to try using some marshmallow fondant to make the ice chunks and unfortunately, used up more of my powdered sugar than I thought so I ended up not having enough to make buttercream frosting to cover the whole cake. Instead. I tinted some of the fondant blue and wrapped it around the sides so I could use the buttercream just for the waves on top. I have never cared much for fondant and now I know why… it was only because it wasn't homemade! Everyone liked it. 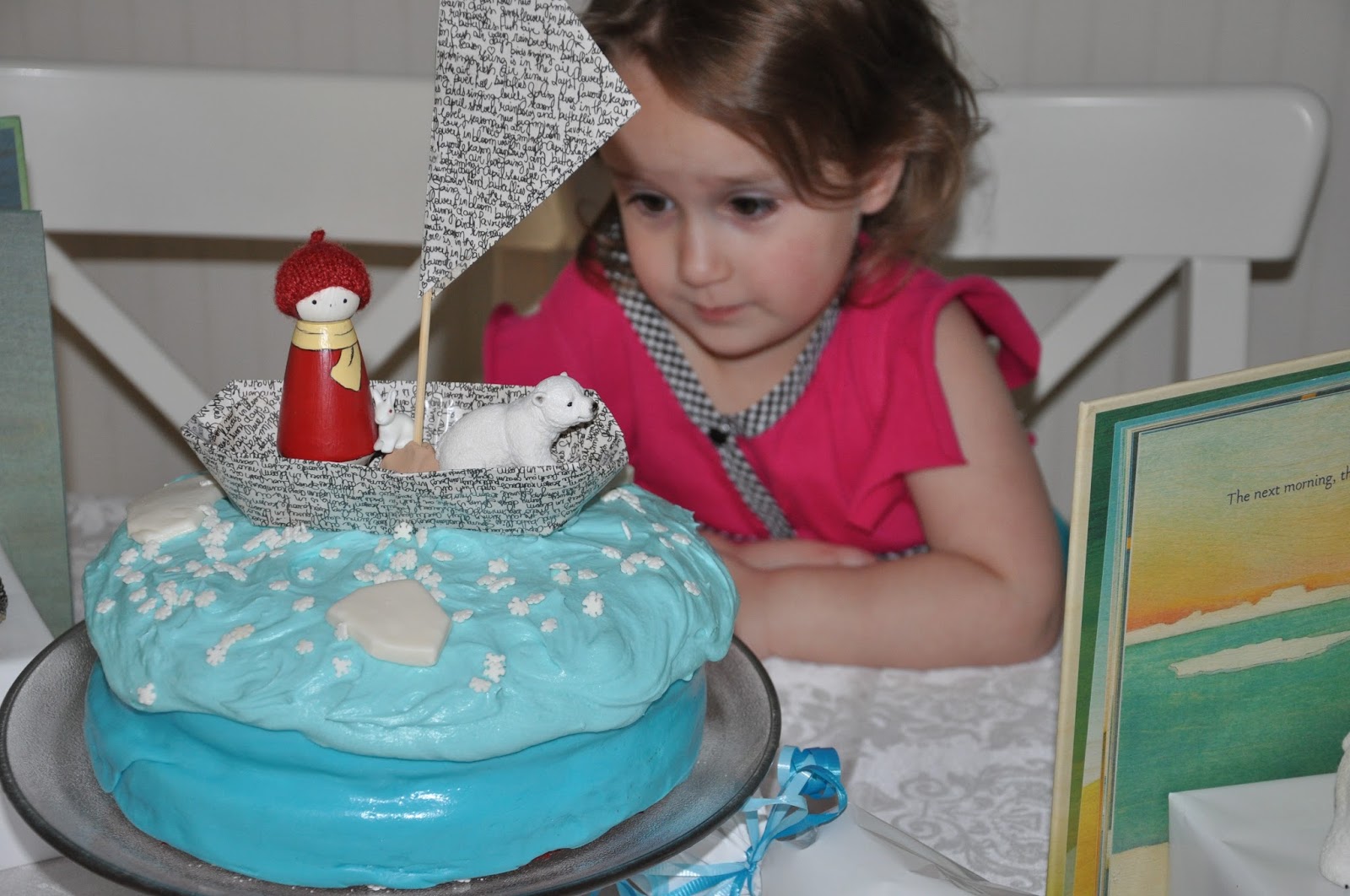 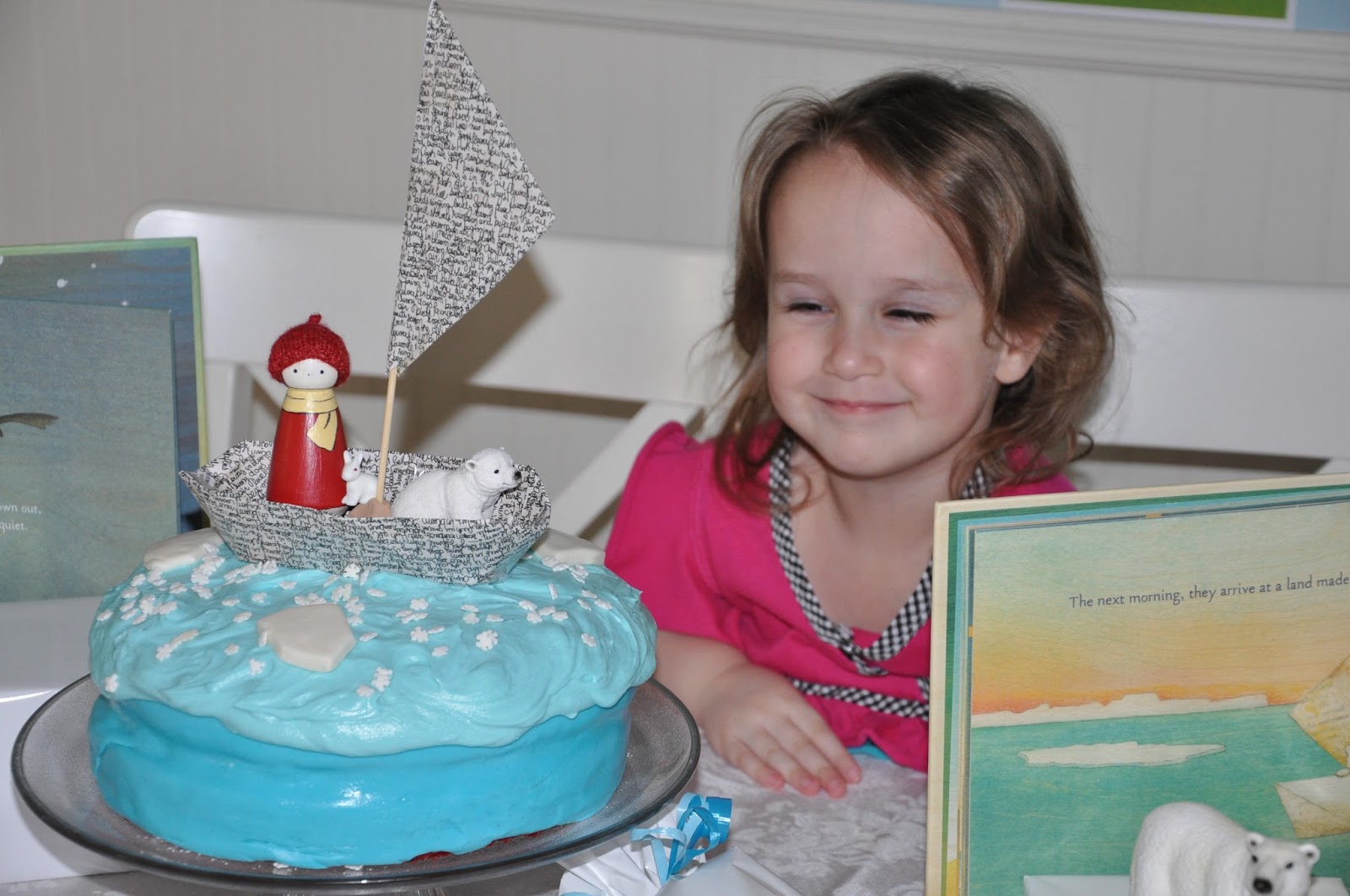 I think she liked it. 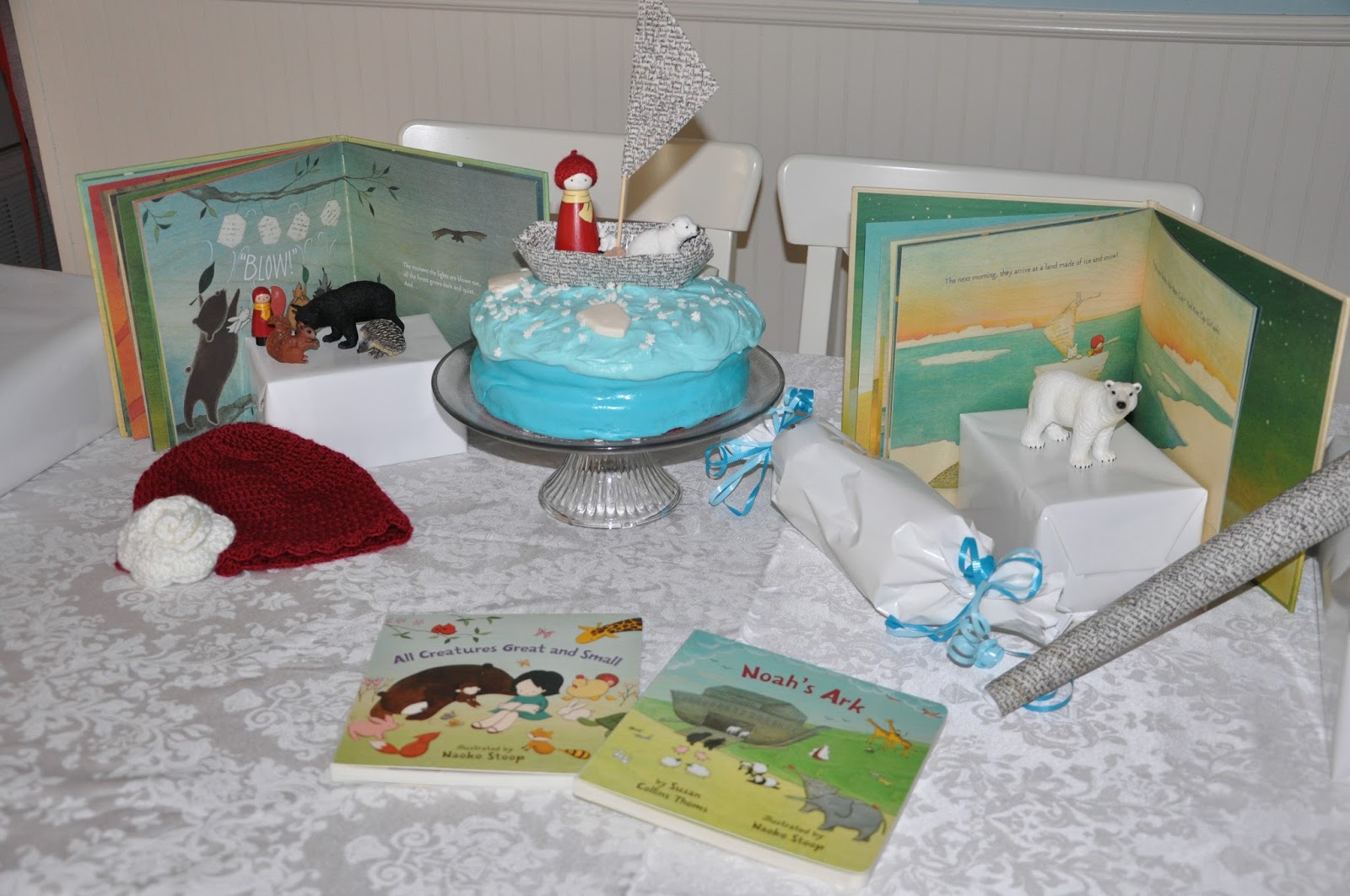 We found an old red cap that I crocheted for Rain (it kind of looks knitted) to use for a decoration. She wore it for 2.1 seconds. 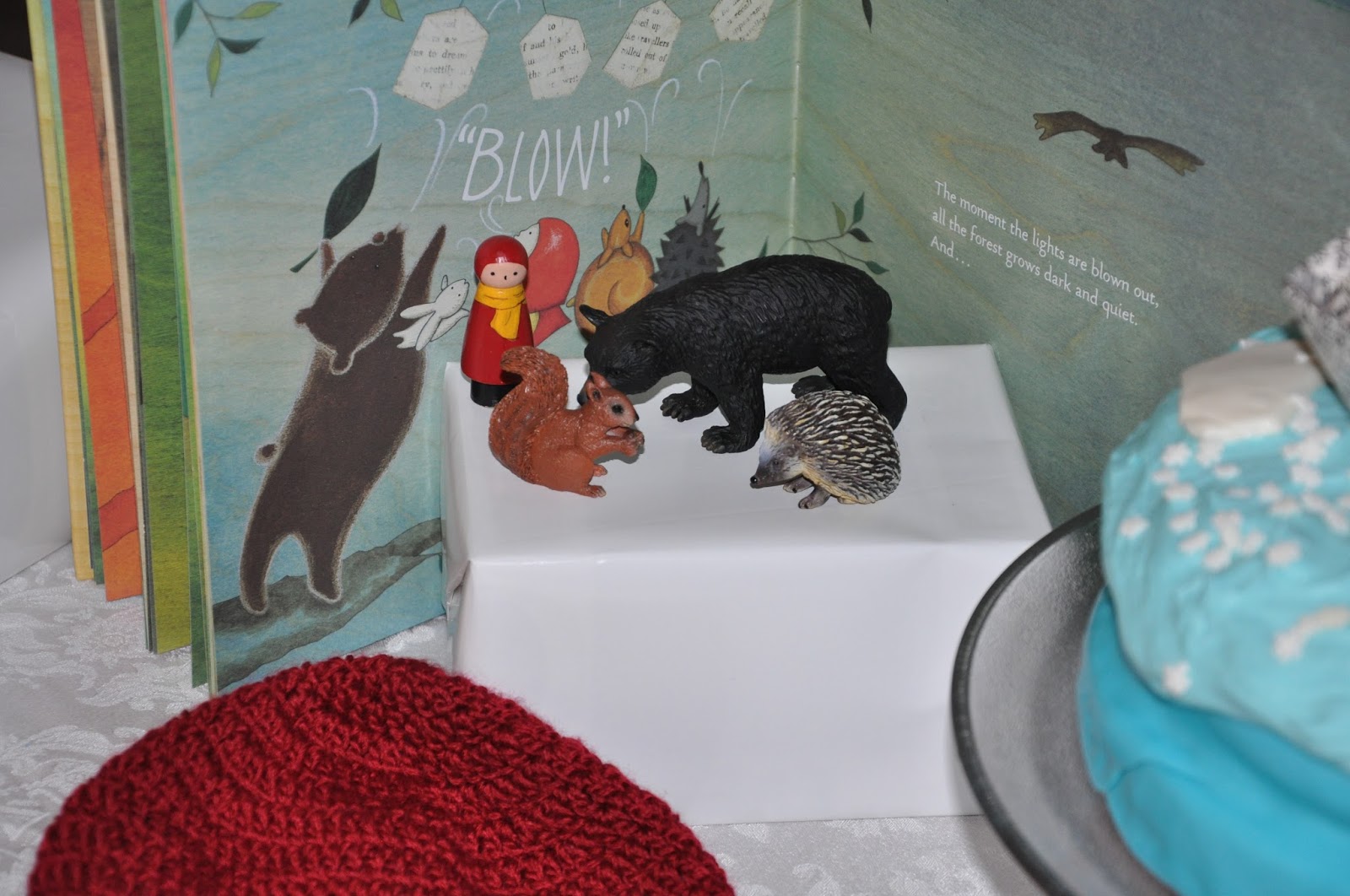 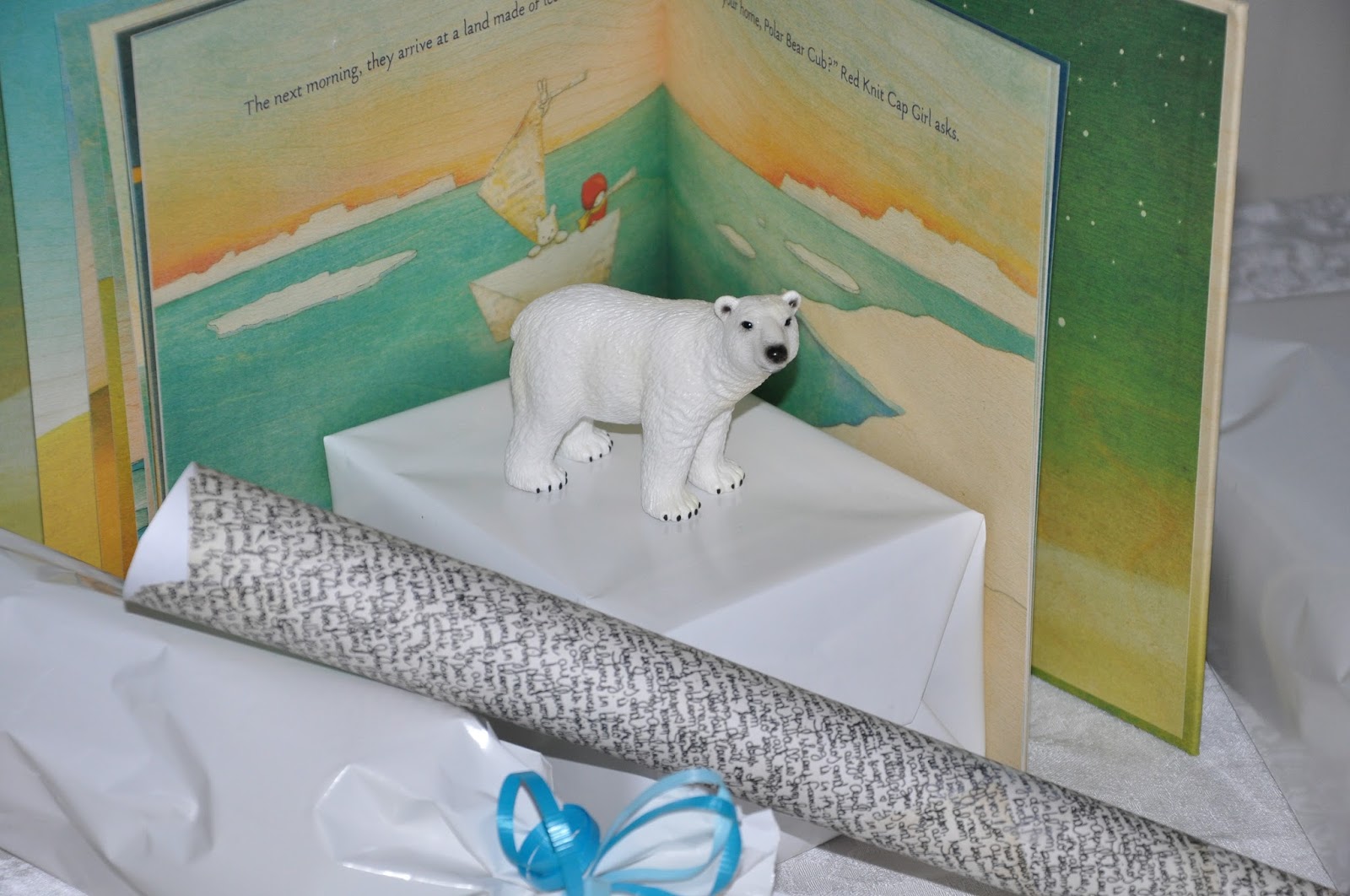 I wrapped her gifts in white paper to look like icebergs and covered the table in a white table cloth. We pulled out all of the Schleich animals we could find to match the characters in the book. Polar Bear Cub, Squirrel, Bear, Hedgehog, Polar Bear Mama but when it came to White Bunny, we needed something tiny and cute. We chose one of the Playmobil bunnies from this set.  I also used some more printed paper to make a telescope (from Red Knit Cap Girl to the Rescue) and some paper lanterns like the ones they made for the moon's party in the first book. We strung them up with little lights so that they really glowed. 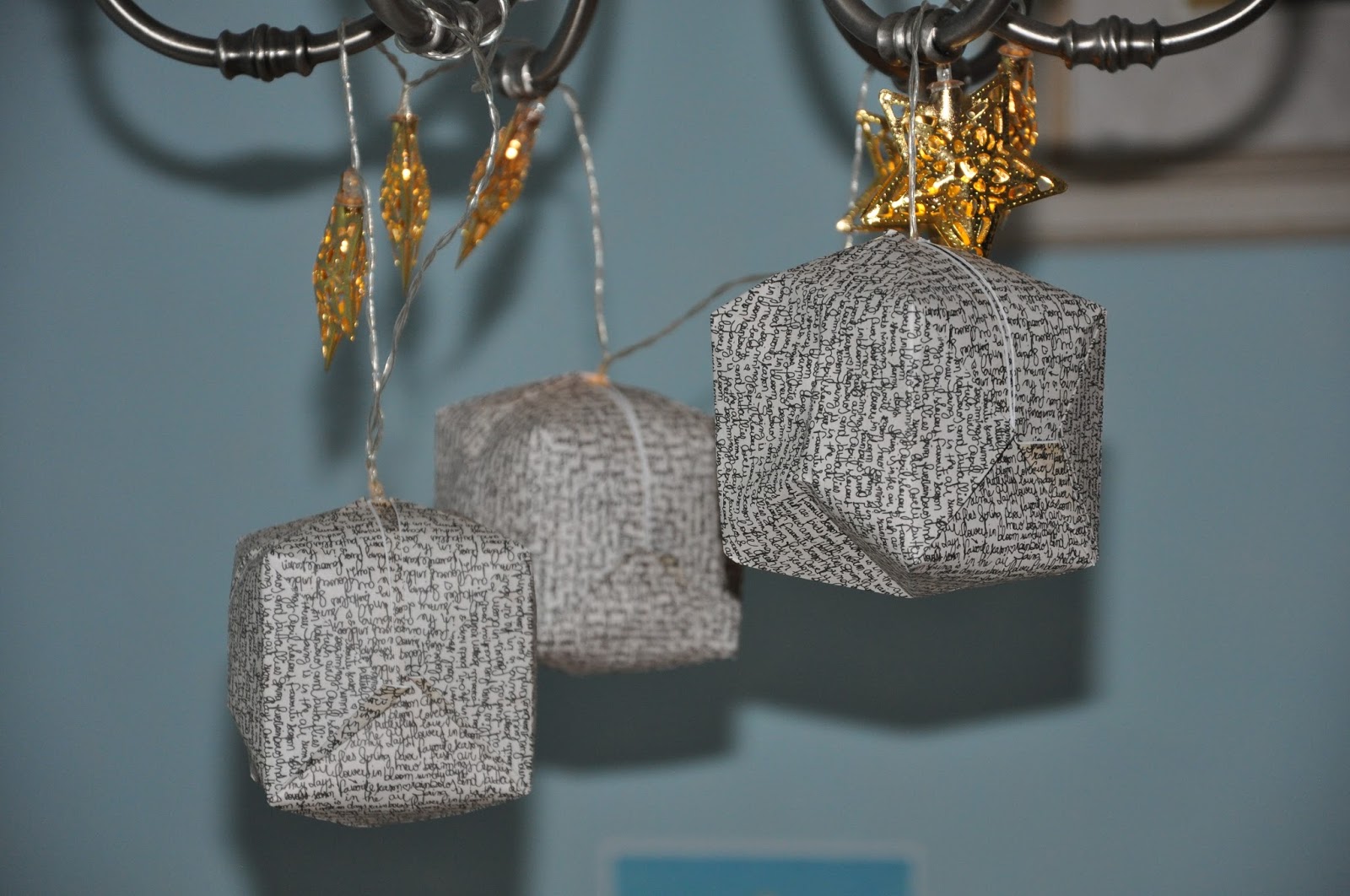 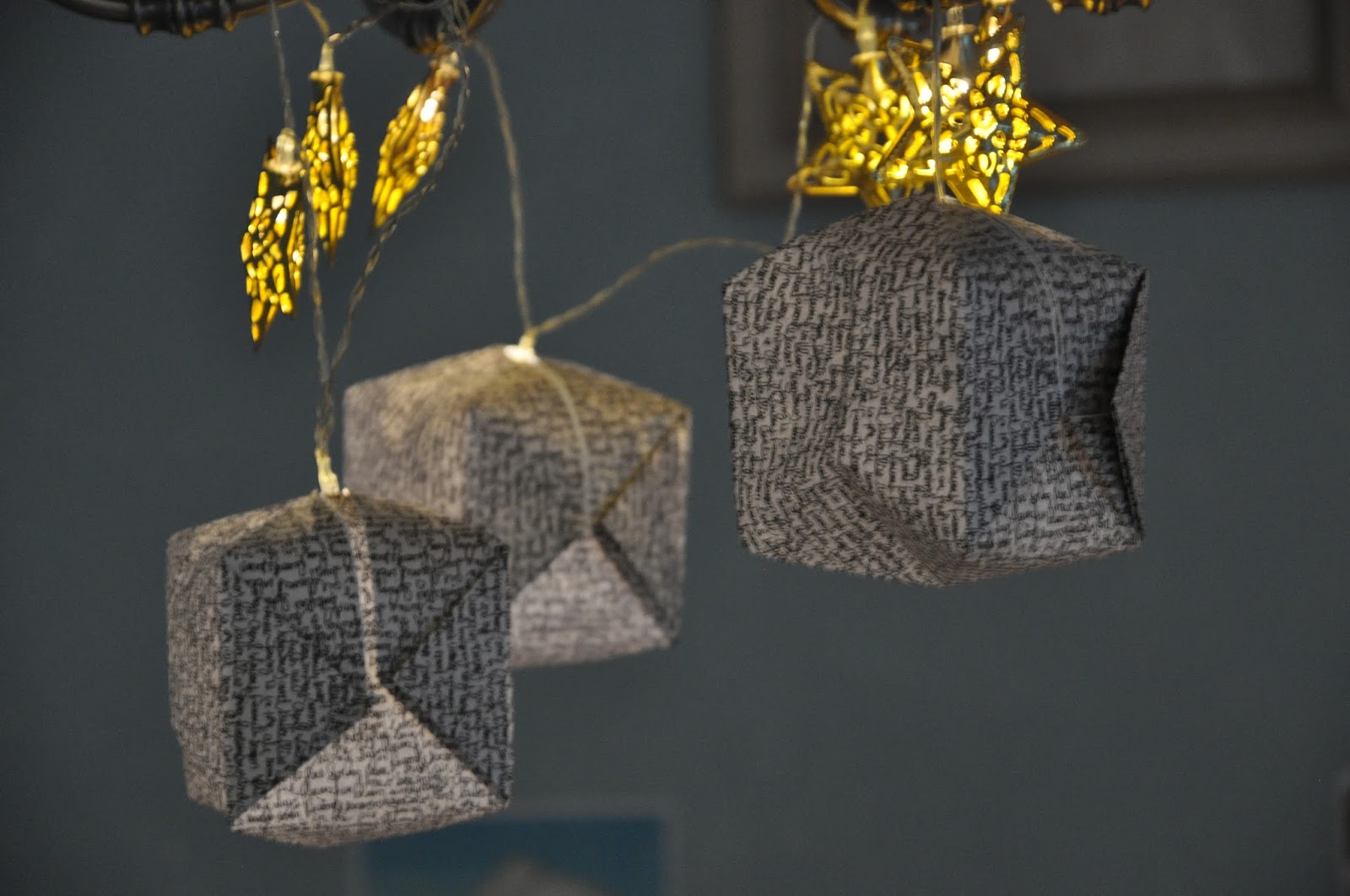 Kinda hard to see but you get the idea. 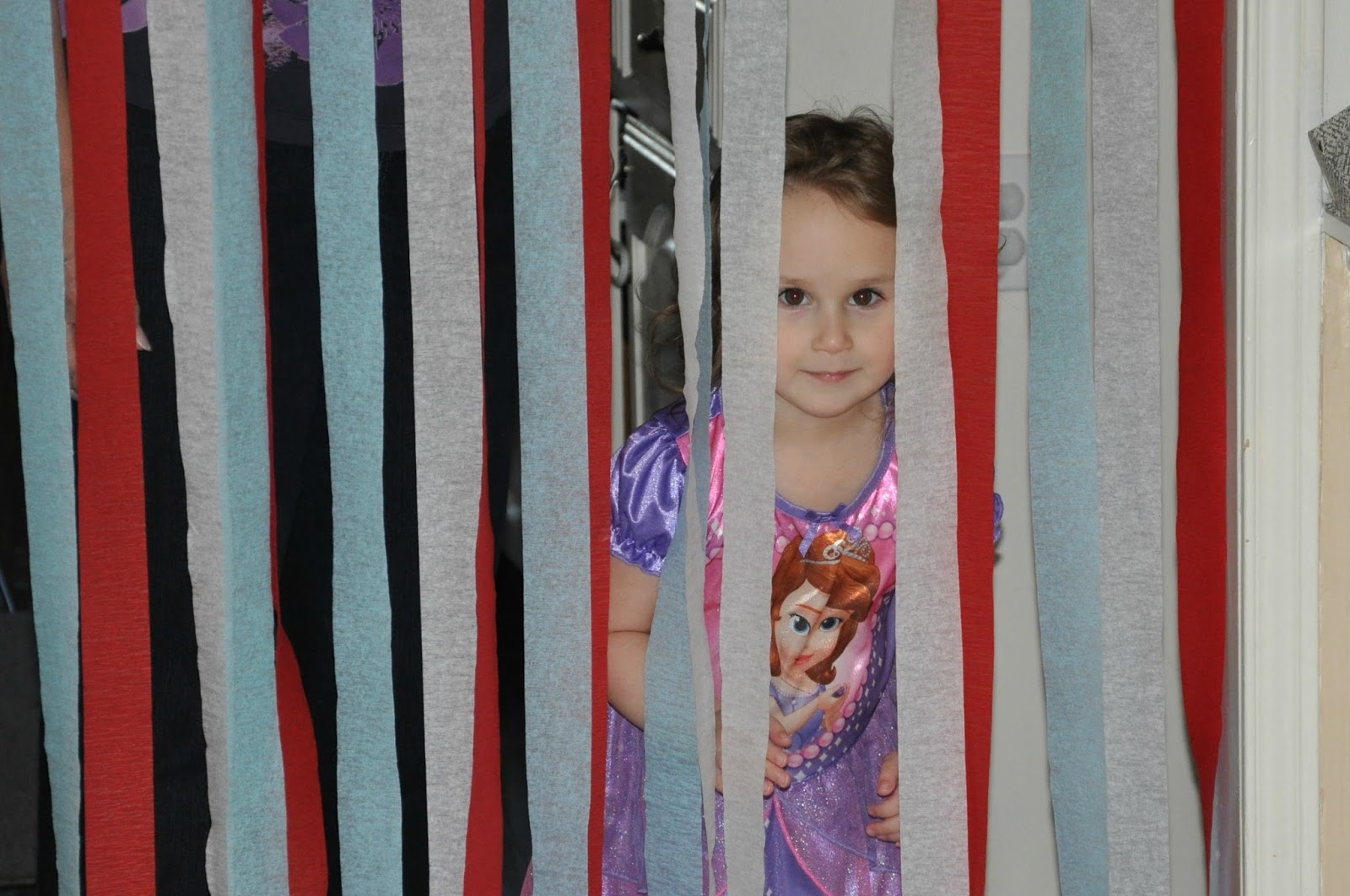 And streamers… Daddy makes sure there are always streamers. 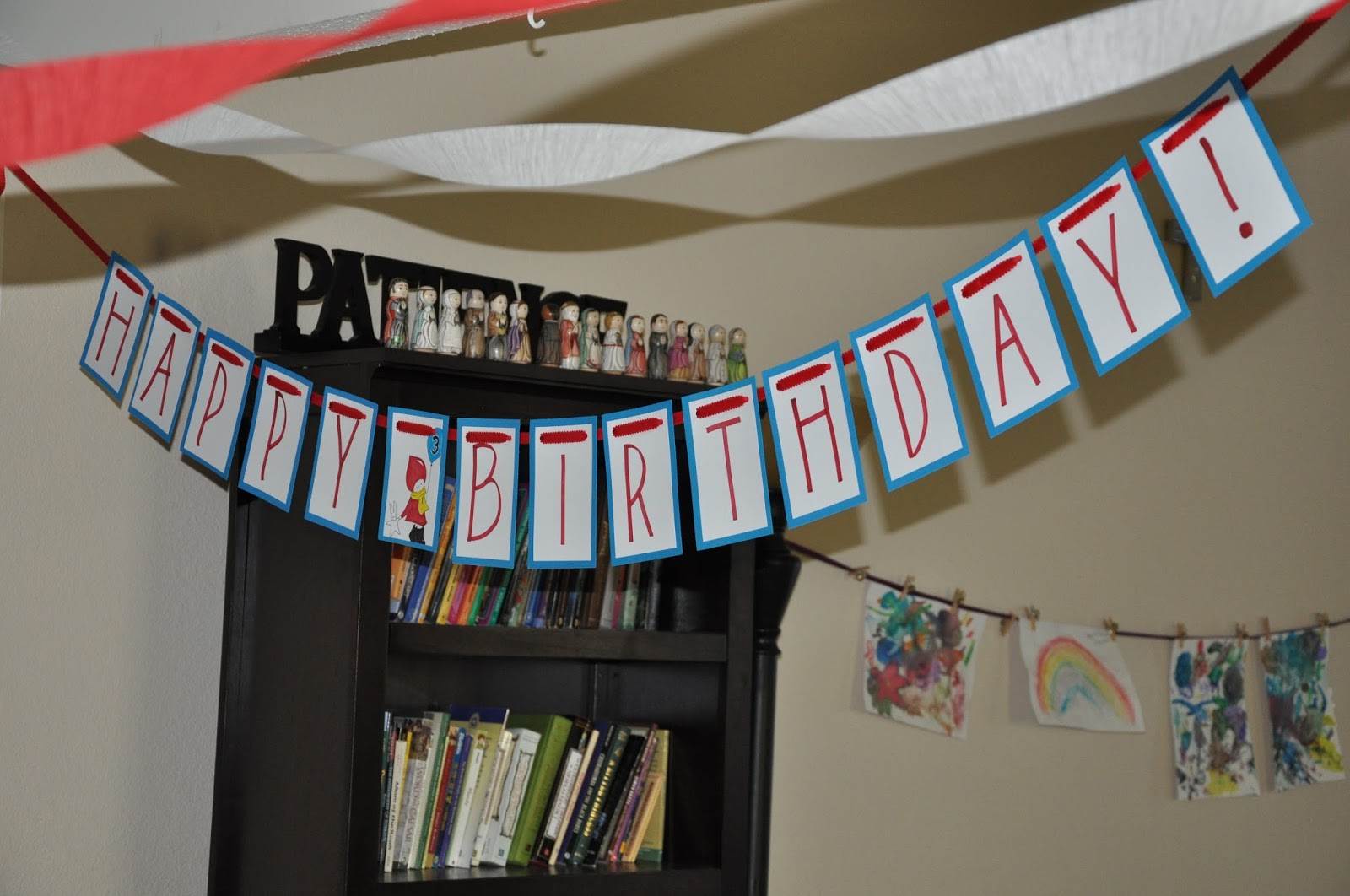 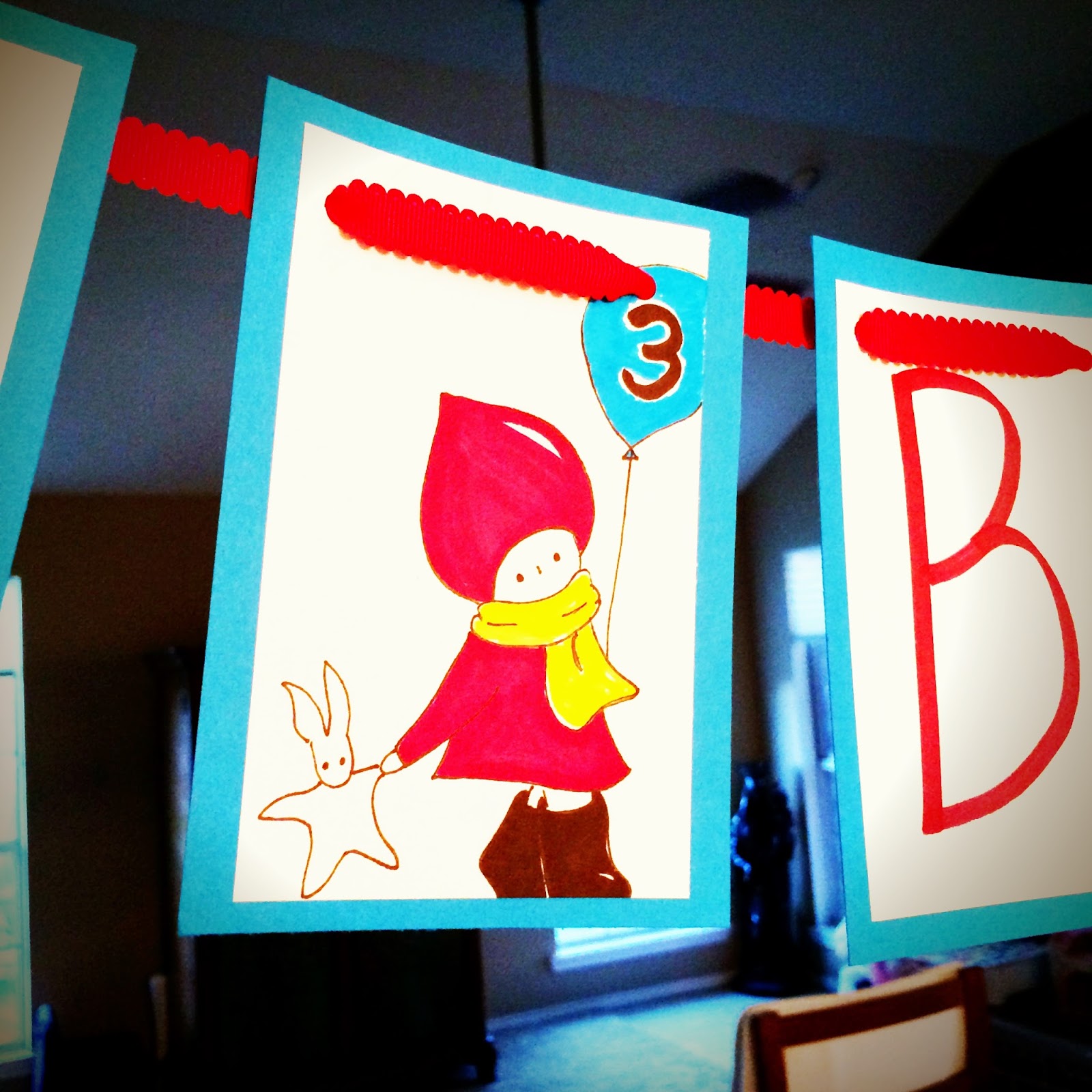 I drew this picture to add a space between the words. Other than that, this was a super easy banner. I didn't even print it out, just wrote the letters myself with a large, red marker. 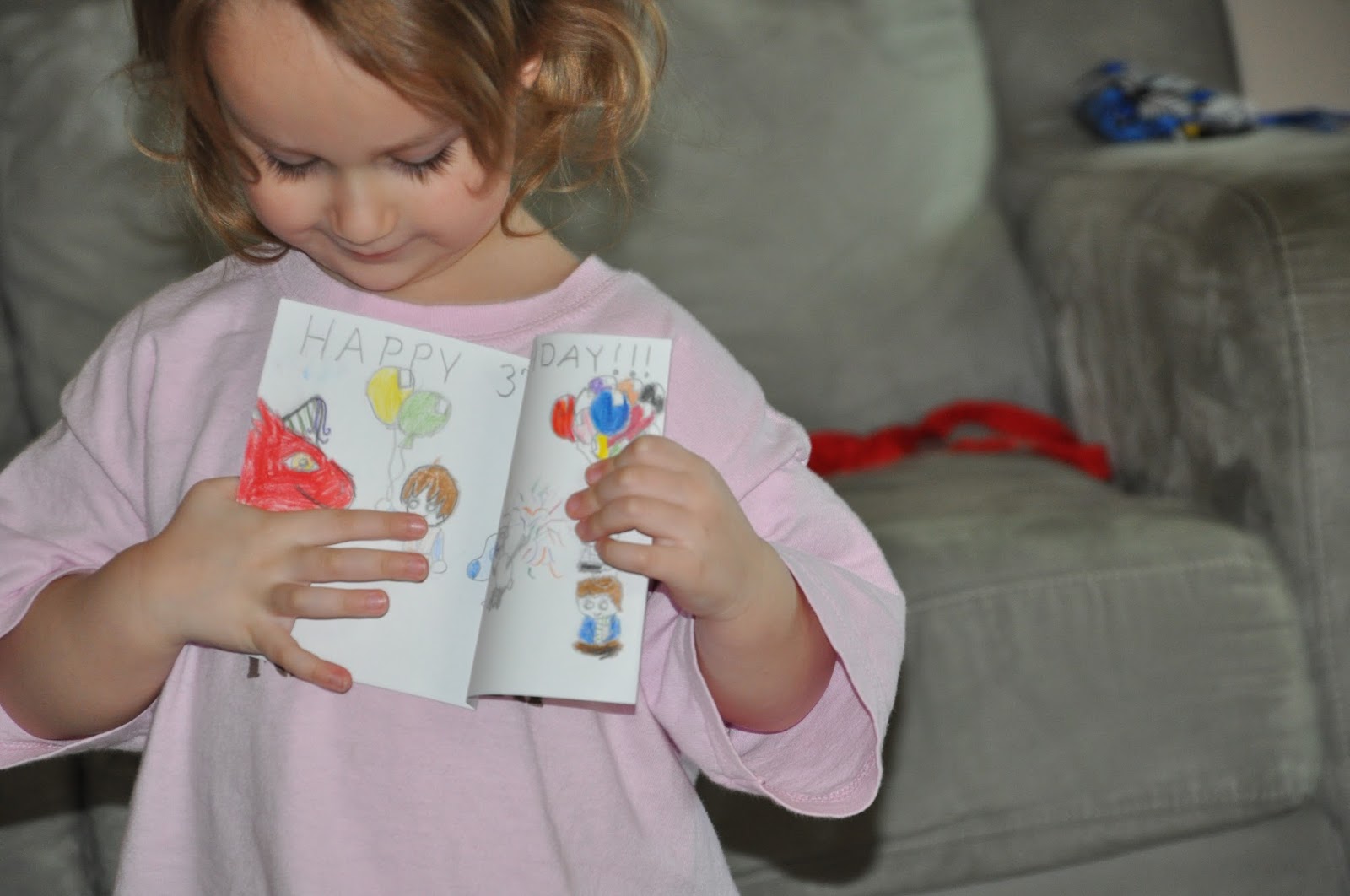 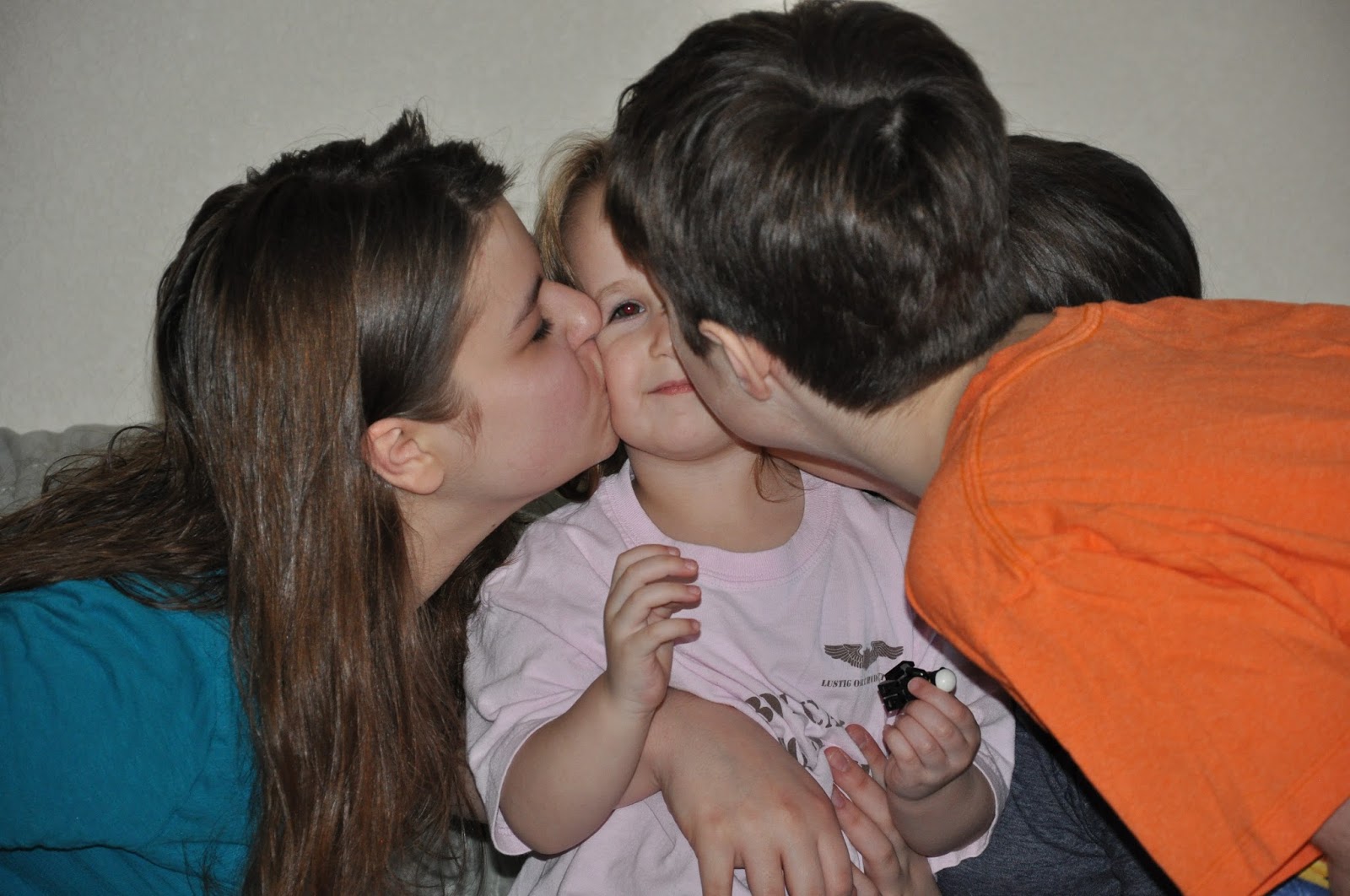 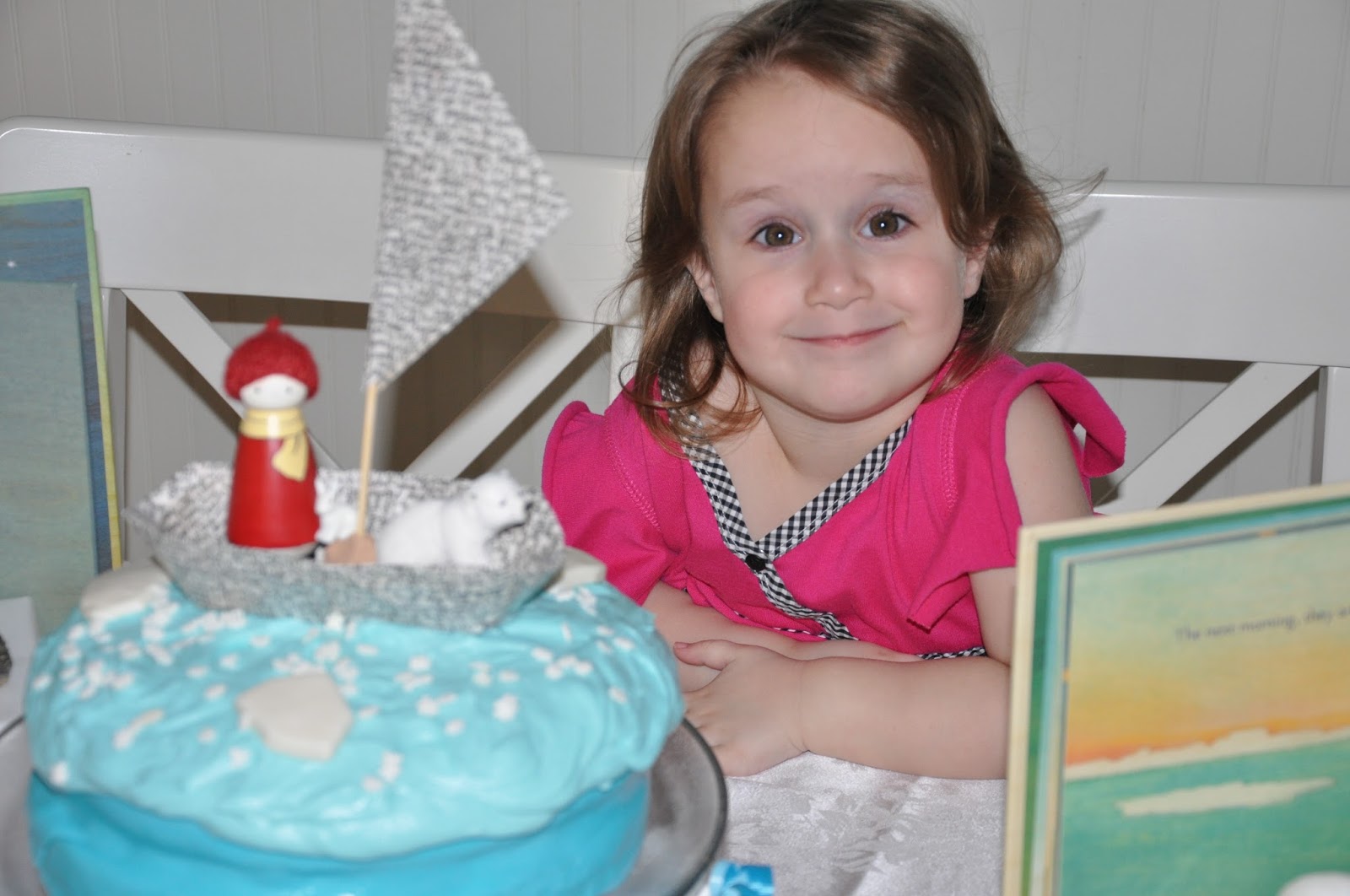 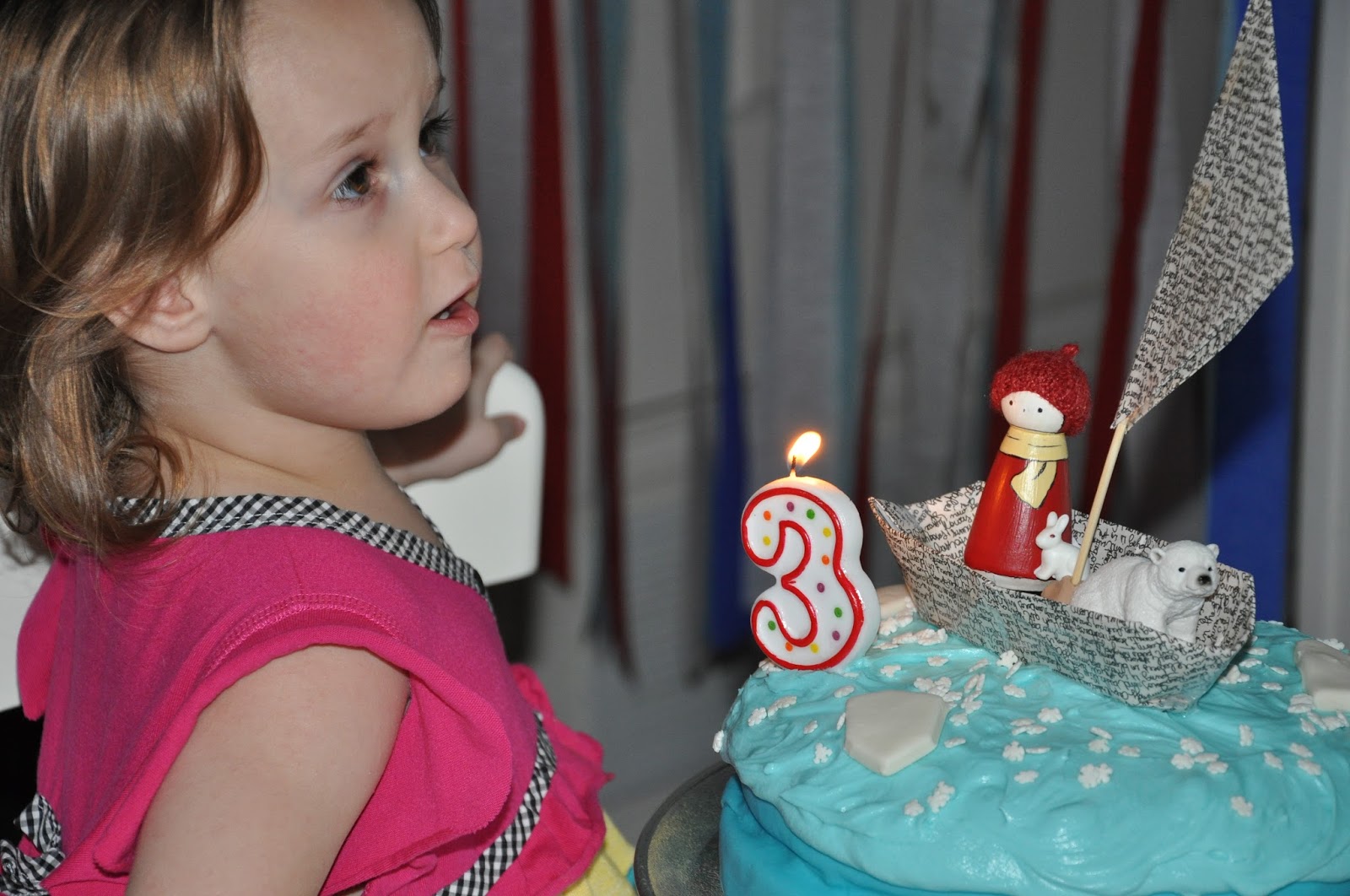 We love you, Cupcake!