My grandfather was a wonderful man. He was responsible, funny, a good friend and had an incredibly generous heart. He was a poor farmer in South Texas who knew just how hard the rocks could be, just how dry the soil could get and just how fast the weather could change. Being the oldest child of his youngest child, I didn't know him in his working days. He was just my grandpa who could be as stubborn as the toughest mule and as helpless as the smallest child. He worried about everything. He worried about where we would find more good priests and the future of the Church. He worried about the fashions of the day and just what those crazy kids did for a whole week every spring in a sandpit called Padre Island. He worried about where the next generation of farmers would come from and if they didn't --- where would the food come from.

He could also tell stories that would make you laugh until you cried and gasped for air --- and he knew it! I loved the twinkle that would show up in the corner of his eye and the mischievous grin on his face when he realized that his audience had lost it. 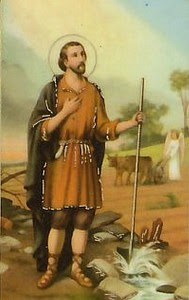 For as long as I can remember, every day, he said,"I won't be around much longer" though everyone predicted that the man who had survived so many dangers (struck by lightning, twice!) and hardships (hurricanes and droughts) would end up outlasting all of us. When I think of St. Simeon I think of my grandpa and can't help but wonder if he did hang on so long to this world and his family just to make sure that everyone turned out OK. He saw most of his 13 grandchildren married and settled and was still alive when his 14th great-grandchild was born (my little Shortcake). He passed from this earth on the Feast of St. Isidore the Farmer and I pray that on that day, in an empty hospital room (he wouldn't have left a captive audience) he was also able to say,"Now, Master, you may let your servant go in peace...."

When I think of my grandpa there are so many things to remember; however, two things stand out the most. First, was his incredible devotion to Our Lady and second was that he raised Ringneck doves (also called Collared doves). How could I not think of him on Candlemas when two of his loves coincide so perfectly?

The law dictated that Mary and Joseph offer a pair of turtle doves or two young pigeons as their sacrifice. When I try to re-create the scene in my head, I think of the soft coo-coo-roo of the ringneck doves that used to wake me when I visited my grandparent's farm. The smell of the pen, the discarded, downy feathers that were stirred by the slightest breeze. I know that every bird has a unique call, but it is that sound I hear ever so softly.

So, we first went to the RSPB to learn about turtledoves. Be sure to listen to their call. (Sounds similar I think, but you decide.)

Then, we borrowed Katherine's amazing idea and made this table centerpiece. I made a line drawing of Simeon's Moment and the turtledoves and then copied them onto a piece of transparent vellum. I also made a copy of each of the original pictures on the vellum and cut them down to fit in the mats. 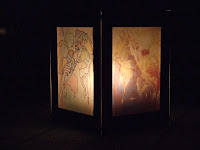 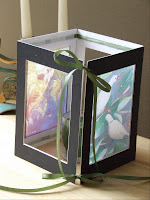 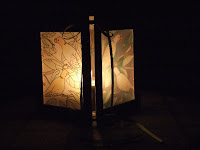 I used black 5x7 mats and chose to make ours four-sided. My original hope was to do three line drawings colored by each of the children but The Professor really doesn't like to color and I didn't feel like forcing him so we devoted 2 sides to St. Simeon and 2 sides to the doves. The picture in the middle was taken when the shade was half done so you can see the inner workings. A three sided shape like Katherine's probably wouldn't shift as much as this one does but I like having a little more room between the candle and the paper.

Lastly, I couldn't resist these Audobon Turtle Doves. They have lifelike designs and authentic bird songs! (If we have to have more stuffed animals at least they can be educational.) They are also going to replace two well loved, little pink birds that stopped chirping ages ago! 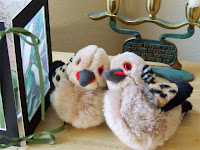 I hope you have a lovely Candlemas! If you have made it this far, I thank you for sticking it out--- my first attempt at loveliness.