Since some people wanted to know how I made the dragon cake AND since I actually remembered to take pictures during the process...I'll tell you.

First I made a devil's food cake (Husband's idea) in two 9 inch round cake pans. Typically when I make a cake that is heavily decorated, I cheat and use a box mix. The first round was cut in half and "glued" together with red frosting (The Professor's idea!) and placed cut sides down. From the second round, I cut a tail and two wedge shapes that made the head. The extra pieces were glued together to make a neck. The thighs were Ding Dongs that I sliced flat on one side while the feet and snout were Ding Dongs cut in half. 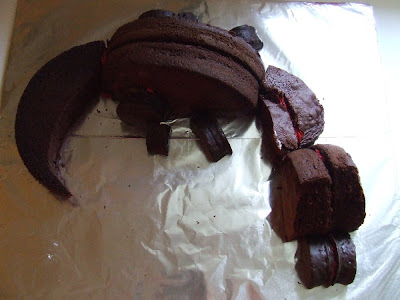 Then I slathered the first layer of frosting on top. (Again, I cheated with canned frosting which I wish I hadn't done as it was so humid here yesterday that the whole thing practically melted before we reached our destination.) This is usually where most people would give up because it looks terrible. There are crumbs mixed in with the frosting, smears on the base and holes everywhere. My trick is to pop it in the freezer, just long enough for the first layer of frosting to firm up. When you put the second layer on, all of those little crumbs will be trapped in the cold frosting and you can usually get a clean top layer. Damp paper towels work wonders to clean off smears and don't be afraid to use any utensils you have to work the frosting into all the nooks and crannies including the ones God gave you (yes, I washed my hands and no, I didn't lick!). 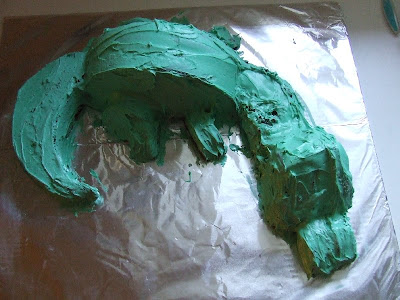 After the second layer went on, I used the tip of a butter knife to give the appearance of scales and a piping bag with white frosting to make teeth and eyes. The pupils and nostrils were Hershey's kisses turned upside down and the spikes were some chocolate covered graham cracker cookies. The wings were supposed to be Fruit Rollups but I forgot them at the store so I used tissue paper instead. 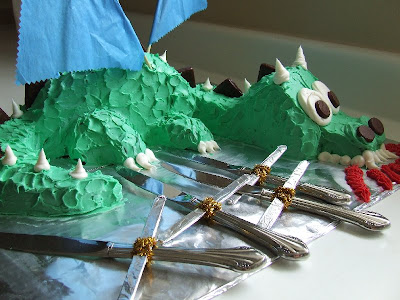 I hope this makes sense. I am terrible at tutorials. You should just come over the next time I make one! We've got back to back birthdays coming up next month and I already have a request for a pirate ship. That should be fun!

Take a look at all of the other creative dragons that were devoured yesterday:
Bountiful Blessings
Shower of Roses
Knit Together in Love
Lord, Make Me a Saint
Pinewood Castle
Go East...

Let me know if I missed yours!