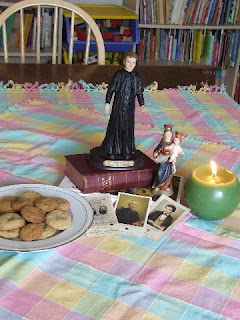 The Bachelor Buttons turned out fabulous and it was Sunshine and Shortcake who discovered that by rolling them very small, they looked like big buttons when baked. I spread out our happiest tablecloth even though it wasn't big enough to cover the whole table. The Professor was very happy to let us borrow his statues to decorate our table. St. John Bosco, of course, is the larger one and the smaller one is Our Lady, Help of Christians. This image of Our Lady is very similar to Our Lady of Mt. Carmel except she holds a scepter instead of a scapular.
We opted for coffee instead of tea (Don Bosco was Italian you know and those Italians sure love their coffee) hence the name Coffee, Tea and Thee. I hope to make this a weekly occurence and one of the best ways to ensure that my children will help me remember (read: won't let me forget) is by giving it a name.

Oh, and yes, my kids have had coffee in their veins since they were a few years old, but lest you should fear, it's more decaf caffe latte than the hard stuff. They call it Kid Coffee and even BigBoy loves it!

The relic cards in the middle were given to me by my grandparents. They were left in their care by a Salesian priest (who I will post more about on the feast of St. Blaise). They are fairly old, in fact the one on the far right is for (then Blessed) St. Dominic Savio. The one in the middle contains a relic of Bl. Michael Rua who was Don Bosco's second in command and the last one is for two Salesian priests who were martyred by pirates in China. The card says "Servants of God" but these two courageous men were declared saints by Pope John Paul II in 2000.