Happy St. Cyril and Methodius Day! I am as fond of these two saints as any good Slavic girl with Bohemian and Moravian ancestry could be, truly. My wonderful, Catholic grandparents* were married in a church dedicated to Sts. Cyril and Methodius. I have often wondered how similar the Slavic language that these amazing saints used for Mass and preaching was compared to the beautiful language I often heard lilting around the old farmhouse where I spent many a summer day. My grandparents also spoke fluent English, mind you. Their parents insisted on it! They only slipped into Czech when they didn't want me to know what they were talking about. Considering my entire Czech vocabulary consisted of "grandma", "grandpa", "Merry Christmas", and a saying that when literally translated has something to do with a billy goat wagging it's tail, their secrets were very safe!

*This is not to say that my paternal grandparents weren't wonderful. They were wonderful in their own way, oh...and they were Baptists.

I have to admit it though, I just can't quite give up my affection for St. Valentine in favor of these two Slavic icons (pun intended). I know they were two amazing men, and we know more about what they did while on this Earth than we know about all 3 saints named Valentine.

We have already mailed Valentines to the in-state cousins. I made heart shaped buttermilk biscuits this morning that turned out horribly dry. No pictures for fear that the flash would cause them to spontaneously combust. I have never had that problem with any recipe that calls for buttermilk before (insert pout here). I promised the kids heart shaped pizzas for dinner which means
we can have a little fun later. We are going to decorate chocolate lollipops for each other with mini M&Ms later (a little act of love and service).

We will read Saint Valentine by Robert Sabuda which is one of my favorite books for this feast day. The illustrations look like mosaics in beautiful muted tones. Of course, it is a fictional legend but it does mention that he was a priest. While it does not have any examples of why he is the patron of romantic love, we always find a way to work it into the story by telling the children that the jailer probably knew of St. Valentine from the Roman soldiers who had been secretly married by him. (I had no idea it was a Catholic Mosaic book. I think I just might have to get that book.)

BigBoy asked to watch Signing Time #4. He calls it "Love" because of the awesome song Rachel Coleman sings at the end. La-la-la-la love!

Lastly, a present for my valentine, the man who ignored his inner Cookie Monster and chose to marry me even though I am just above the Mendoza line when it comes to cookie baking. Did you notice how powdered sugar covers the
crispy edges nicely? 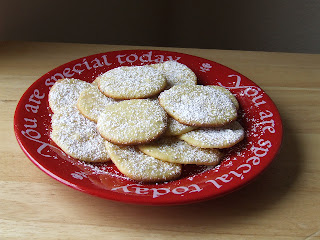