Dawn mentioned that today was Laura Ingalls Wilder's birthday. Sure enough, she was right! It is also the birthday of St. Thomas More, Charles Dickens and Garth Brooks. (Glad to know Garth is in such good company.) Sunshine is reading the Little House series right now and enjoying them. I had no doubt that she would since she first fell in love with the characters when we picked up some of these at the bookstore. The My First Little House Books are a wonderful way to introduce younger children to the complete stories that they can read later on their own. 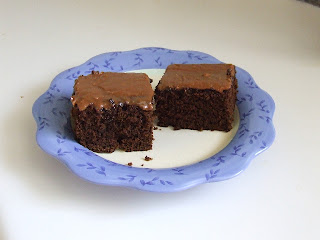 Since it was a special day, we decided to make some of Mrs. Wilder's gingerbread right here in our "little house". I found her original recipe here and loved showing the kids the letter she wrote along with it. As you can see this is definitely a ginger bread, not a cookie and it is so full of dark, fragrant spices that the children thought it was chocolate cake. It worked perfectly with The Professor's history lesson which was about the Crusades and the spices they brought back from the East. I think he sniffed just about every spice bottle in my cabinet. I had some whole cloves and cinnamon sticks on hand so he took at look at those as well. He decided garlic is his favorite because it reminds him of chicken. (I guess I make Garlic Chicken a lot more than I thought I did.)