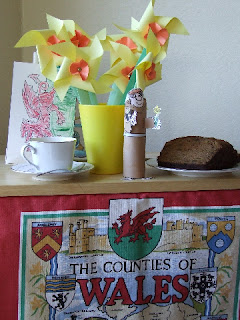 Happy St. David's Day! We had a lot of fun learning about Wales today. We looked at all of the castle websites at The Professor's insistence (not because Husband told him that Grandpa was 16th in line to inherit one of them) but because ...well, he is a nine year old boy.

Our favorite site turned out to be one that wasn't found on any of the sites I linked to earlier but rather one that The Professor found in his book What Were Castles For? by Phil Roxbee Cox. This book offers internet links that allow you to further explore castles. Our favorite was this one at National Geographic. One of the "ghosts" you meet in the castle is in the chapel and he says the Ave Maria.

The picture above shows the lovely daffodil windmills that the girls made and the Welsh flag that The Professor willingly colored, in fact, he volunteered to color it. Have I mentioned how he feels about coloring? HATES it! I know, I know... a fierce red dragon might have had something to do with his change of heart.

Everyone pitched in to help glue some part of poor St. David to his body. I say poor because at one point each part of him was in a different room of the house.

Our bara brith turned out OK. It was very tasty but I had to bake it for a long time to get it to set up completely so some of the edges were
very well done. We served it with amaretto coffee for no reason whatsoever other than it. was. yummy! (I made the Welsh Rarebit for lunch instead of tea.)

We spent the rest of the time reading selections of Wales: Enchantment of the World Series and looking at the banner that usually hangs in the boys' room but was brought to the table for added decoration. It was a gift from their uncle who visited the UK.

It was a good day despite the fact that Husband came home early with a nasty cold he thought he was getting over. Maybe my lower fat version of the Potato and Leek Soup will knock it out. What is the old adage...feed a cold, starve a fever? The girls liked the soup but the boys merely tolerated it. Ah well, you can't please everyone!