Dawn has a post about Jane Austen, laundry and so much more! She wants to know which of the stories are your favorites and which heroine you admire most. I don't like to choose when it comes to Jane Austen because I am afraid that my opinions have been formed too much by the actresses who have portrayed them and not by the characters themselves. 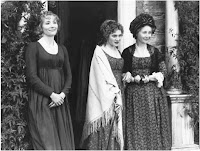 I also don't think of myself as a Janeite but I do enjoy her tales. Perhaps I should be tested? I have read some of her books and have seen many of the movies based on them in all their different incarnations. They are very enjoyable "chick flicks" and I say that as someone who has the highest respect for "chick flicks".

I like 'em. I need 'em! They are fun and romantic, usually pretty light and will leave me smiling as I pitter-patter off to bed. But... I guess I have a dark side, too.

Pain, deception, intrigue, mystery, heartache, sorrow, torment. Why, you ask? I don't know but I am sure a qualified therapist could figure it out.

It's possible that my fascination with Bronte's Jane could be the influence of my freshman year high school English teacher. This was the the first time I had ever read a novel like this. (Public school education, what can I say?)

Mrs. Griffith herself was not the inspiration, nooooooo! In fact, her efforts at winning our affections for Jane and Mr. Rochester included recording herself reading the entire book with an affected English accent followed by a viewing of this classic production from start to finish. You can imagine what my fellow 15 year old classmates and I thought of these attempts. Yaaaawwwwnnnn!

But even though she was an incredibly annoying teacher from my perspective, I had to admire her energy. I wasn't crazy about the book that year , but I picked it up that summer while I was a hospital volunteer and gave it a serious chance. I was hooked. I think I have been reading it once a year, every year since then.

I understand if those who love Jane find my Jane a little tough to swallow. It is awfully dark. Might I recommend a compromise.... 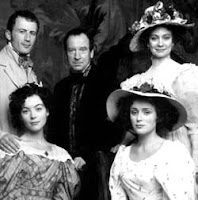 Wives and Daughters was written by Elizabeth Gaskell. She was a contemporary of Dickens and is best known for her biography of Charlotte Bronte. I have been meaning to read some of her other novels, but never seem to think about it when I am at the library. I have seen Wives and Daughters in its entirety at least twice now and highly recommend it. Justine Waddel plays Molly Gibson perfectly and is as lovable as any of Jane's girls. There are some pretty heavy hitters in it as well that I am sure you will recognize from their other performances; Michael Gambon, Tom Hollander, Penelope Wilton, Bill Paterson, Barbara Flynn, and the beautiful Rosamund Pike who I believe stole the show from Keira Knightley.

I don't want to give anything away to those who haven't seen it, but Wives and Daughters has just the right amount of sadness and smiles to make this a beloved favorite. Hmmmm, come to think of it...I've got plenty of dirty laundry on hand and it is very gray and dreary outside...bye!