I am a patient mom when it comes to potty training. I believe in child-led potty training. I don't mind changing diapers even on a toddler who is big enough to turn on the bathroom light, brush his teeth and wash his hands.

My first experience was my oldest son who had, shall we say...some issues. We waited until he was well past 3 before we even talked about it mostly because Sunshine and Shortcake were already on the scene (yep, three in diapers~ been there, done that). He took to the idea... half-heartedly.

The tinkling half was fine, the other...not so much! He didn't want to do that in there and so decided he wasn't gonna! And he. could. hold it. Boy, could he hold it. EIGHT DAYS he could hold it! There must be something wrong with him. Can it get stuck in there? Surely the doctor will want to see him. "Call me when if he hits day 12!" is what the doctor said. DAY WHAT?????

It was horrible. It was traumatic. And I am sure my son didn't like it much either. We tried everything to "force" the issue. Coffee, mineral oil, prune juice...you name it. We thought if he could just have a couple of successes he would get it.

Nope! Every eight days was another battle.

My mother sympathized. She claims she would have bet money that my brother's wife would have to change his diapers. Well, The Professor is nine now and his future wife has nothing to worry about!

Since then I have had the pleasure of helping two little ladies through this rite of passage with far less trauma for all involved. Experience has taught me to look for certain signs of readiness in the child.

So when BigBoy started exhibiting these signs last week we thought it might be time to try. He will only be 3 at the end of May and I know that boys typically take longer. Trust me! I wasn't rushing him. He had all the signs!

We picked up a potty chair recommended by an expert in this field. We made it accessible to the playroom where most of his activity takes place. We even had an insert ready in the event that he wanted to be just like the big kids. We turned our half-bathroom into a little man's dream room. Two white steps on a plush plum colored rug led the way to his throne where a basket of books waited patiently at his side to entertain and distract him. A treasure chest of secret delights was perched high on the shelf behind him ready to open and celebrate as many momentous occasions as necessary. 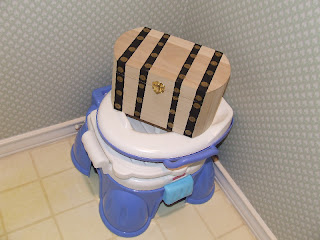 Two days. That is how long it took. After two days of anxiety attacks, tears and flashbacks to son # 1 the throne has been dismantled and all evidence of this apparent torture device has been hidden away in the back of the master bath where it shall remain until I-don't-know-when. I am OK with that. I just have one question.

Should I write a letter of explanation to his future wife now or just roll the video tape?