The Dangerous Book for Boys is a great book! I told Alicia that my husband is working on a review of it for me (it is definitely the kind of book that should be reviewed by a dad) but he hasn't been able to wrestle it away from the nine year old boy who eats and sleeps with it. 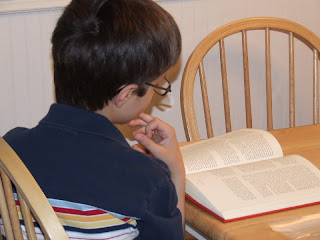 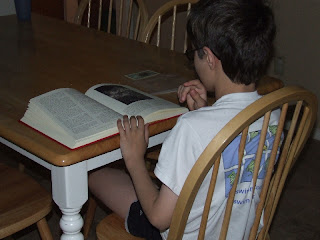 (OK...not sleeping, but reading it at the breakfast table in his jammies.)
So how about an impromptu review from The Professor:

This book is called the Dangerous Book for Boys and I really think it is interesting. No wait, I mean... I think it is really interesting. It has all the supplies a boy should have. It mostly tells you how to do things like skin a rabbit and how to make some cool paper airplanes. It tells you about the time period of the dinosaurs and it also tells you how to play marbles and about famous battles like Julius Caesar's invasion of Britain.

It talks about girls too. It tells you that when they aren't able to lift something, don't taunt them. Offer to help. If you can lift it, ask where she wants it to be put and if you can't, sit down and just talk to her. I don't think I will need to read that chapter until I am 12 or something.

I think that boys from 9 to maybe 20 would like this book but my dad likes this book and he is older than that!