Theater is life.
Film is art.
Television is furniture.
~on a t-shirt that belonged to a college friend 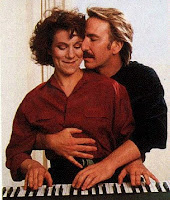 Thank you, thank you, thank you Karen for this wonderful recommendation. Not only did I get to see a truly amazing film with a deeply moving story but also so many of my favorite British actors looking much younger than I have ever seen them and who I am madly in love with.

Alan Rickman (with a silly moustache or greasy black hair, I don't care... he captivates you with his voice even when he's wearing a goofy looking alien head!)

Bill Paterson (from Wives and Daughters and Miss Potter, love him and his lovely Scottish brogue!)

Deborah Findlay (also from Wives and Daughters! She played the darling Miss Phoebe although most people probably won't recognize her, only those of us who have watched it 1,000 times)

It was terrific! I do agree with Karen that the threat of wild, zany comedy that is perceived from the cover art of the DVD has probably kept most people from seeing this movie (that and the fact that Patrick Swayze has ruined every hope of success any movie that deals with "ghosts" has although Just Like Heaven did a bang up job trying to rectify that).

Anyway... forget Patrick Swayze, forget the DVD cover... do yourself a favor and enjoy this work of art.

This is a British movie. I don't recall any four letter words, but then again, they seem to slip past my ear when they are said with a lilting accent.

Bill Paterson's character questions the legitimacy of his ex-wife's new husband's parents' marriage (too confusing?) repeatedly in one scene (if you know what I mean) and of course, it is just assumed that pre-marital relations are OK although it never actually shows you more than a man and a woman sleeping in the same bed after a romantic dinner. The events of the evening are implied when Nina (Juliet Stevenson) buys her own toothbrush before the date begins. That being said, this is not one of those movies that forces it down your throat by mentioning it at every turn. I give them credit for their subtlety.

The only flesh you will see is when Stevenson's bathrobe opens a bit on top which is about as revealing as some of the low cut gowns all the Hollywood starlets are wearing these days. Not that I think those outfits are acceptable. Just trying to give you a good idea of what you will see... you can decide if it might offend you.

Email ThisBlogThis!Share to TwitterShare to FacebookShare to Pinterest
Labels: Movies