Women of America, show us your... 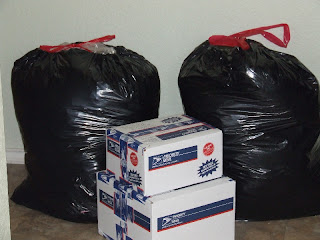 Not terribly impressive you say? Your pile is bigger than mine? Yeah, well... this isn't the whole load... just what wouldn't fit in the van!!! The boxes are supposed to go to children in Iraq but that means a trip to the post office, so here they still sit...

...that was our third load for this year! Sad isn't it? I am not proud. Well, yes I am. I am proud that we are doing something about it. I could go on and on with excuses and reasons as to how the accumulation occurred - the evils of divorced grandparents and cereal box surprises but for now, let's just focus on the positive!

There have been some awesome posts written by some ladies I truly admire about stuff, stuff management, and detachment from stuff and they have made me think about what we are doing right and what we could do better.

I understand the peacefulness of an uncluttered home as I have been able to achieve it on special occasions, but I also understand that most "fixes" are not one size fits all. For example, it might be easier for someone in a higher financial bracket to part with items knowing that replacing them won't really impact the budget whereas someone in a lower income bracket might hold onto any items that they thought they could "recycle" someday to create a little more breathing room in the bank account.

Sometimes the configuration of a house makes all the difference as opposed to actual square footage. Modern houses are not built for families to live in, I am sure of it. Houses built in the 1950's for example were designed to be lived in with an efficient use of space and built-ins galore. Some houses don't even come with linen closets anymore when you use to find one in every bathroom!

I know that I have to fight the temptation to compare my home with my online friends' without taking into full consideration the circumstances. One family who has just as many children might have just as much stuff, they just also happen to have a bigger house to put it in because let's face it... "clutter" doesn't always mean "too much stuff". It means stuff that is not efficiently organized for the space to contain it. This summer, we are focusing on the "efficiently organized" part of the equation as the spring found us tackling the "too much stuff".

We have tried to stem the tide of toys and (when that fails) have tried to bail the excess through frequent purges which have been met with mixed reactions from my children. The girls are the most sentimental and the boys have the best memories. Every thing has the potential for being a precious treasure or a prized possession. The children have matured with age and the onset of reason. They now delight in the thought that a child whose toys were swept away by a freak flood will enjoy getting to hug the teddy bear that has been hibernating at the bottom of the toy box, but they had to get to this age of understanding before it "kicked in"...kind of.

One thing that works well for us when it comes to "separation anxiety" is to put those items that are not played with much but still beloved in a tub out in the garage. In 6 months time, the truly precious items will be retrieved and what is left is bundled up in black bags to be donated. Mind you, I was skeptical the first time we tried this because I just knew that the whole box would be emptied into the toy basket and we'd be back at square one. To my surprise, I found that 3/4 of the box was still full at the end of the day. They might have enjoyed oooohing and aaaahing over the long lost artifacts, but even they realized that life was still good without them.

Our children clean up better when they know where the stuff goes and that means having a home for everything. We are working on this solution this summer. We have tried big, giant toy boxes thinking "one place to pile it all up will be perfect"! The problem is that our kids don't dig. They play with the same old toys at the top over and over again. A childish solution to this problem would be to dump the whole thing out to get to the Barney at the bottom but my kids don't dump either. The big toy box solution won't work for us unless we can make sure it stays only half full. Maybe someone else can offer a better way to make it work? I would love some helpful hints from any B.O.B.'s (Born Organized Bloggers). My ideas tend to backfire. Like the time I thought I would pare down the dress-up box by putting it all in the washer and tossing whatever didn't survive. One little stretchy wrist band disintegrated and that was it!

Every so often I have to stop and ask myself, why do we indulge these little people running around everywhere? For me... I want to give them the opportunity to be creative and explore every corner of their imagination. We will always have a dress-up box, a puzzle drawer, a game cabinet, lots of book shelves and yes, toys (as long as we are blessed with little ones because children will grow out of them someday, sniff sniff). I also believe that my house is more than just a house. It is a school room, a science lab, a cooking school, and a gymnasium (especially since we live in a climate that makes certain months off limits for too much outdoor play).

We are all in different places with different houses and different families. We have different solutions to the chaos of clutter and varying levels of tolerance. Homeschooling moms have quite a challenge when it comes to living in the world but not of it. We are using the materials around us to live out our vocations in holiness and happiness while defending ourselves and our precious ones from the onslaught of materialism. Sometimes all we can do is duck behind the shield of a grace-filled life to defend ourselves in the battle of the bulging drawers! 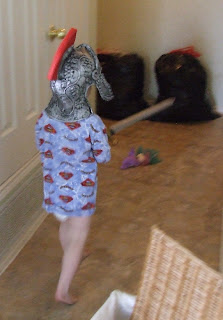