My oldest two children are as different as night and day which is good since one is a boy and the other a girl. He wants to be a race-car-driving, Lego-inventing-scientist-priest (as long as it is the kind of priest that doesn't have to do weddings. All that kissing... blech). Sunshine, well... I'm pretty sure she wants to be Melissa Wiley. Or a nun. She's still deciding.

Getting The Professor to write was the hardest box to check off on my home school checklist. Not the actually forming of the letters, but the sitting down and committing all of those stories in his head to paper and ink was worse than any dentist derived torture. I am sure I don't know where he gets it; I only had to type that last sentence three different ways and it still doesn't sound right to me.

Anyway, the girls have been much easier to convince that writing can be fun (even if I don't believe it myself). In fact, the amount of paper those two pen and paint could probably produce a few manuscripts a year... illuminated manuscripts that is... because what good is a story without pictures!

Here is Sunshine's latest creation. This is her "first draft". There are no pictures, yet. I typed it for her exactly the way she related it to me. She wanted to share it with Mommy's Blogger Buddies and Forum Friends. She also wanted to share it with her E-pals who live so far away, but can be brought closer through the magic of the internet.

Once upon a time, there was a princess who was very happy. Everyday she would go to her favorite window in the tower which was in her room. She would put two or more flowers in the vase by the window. But today she was very cross because a very, very, very fat prince captured her and tied her up and asked her, “Will you be my wife?” She didn’t answer. “Will you be my wife?”, he asked louder. She didn’t answer again. She just shook her head, no.

So the prince let her go but he met her again when she was sitting down drawing a book. The fat prince tried to convince her to marry him but she wouldn’t say yes.

One day, on the swings where her mother and her always went to have private talks about things they liked, the princess saw a handsome young man. She saw him there every day when she and her mother had private talks. They had a date and then they got married.

The fat prince was walking near a dry river. He expected it to be full of water. He leaned forward to take a drink and then he fell down and hurt himself and he never got out. He died from hunger and thirst and that was the end of the fat prince.

The princess and prince were married and had lots and lots of children.

Kind of ironic about the fat prince, huh? Just about all of her stories end the same way... someone getting married that is, not the unpleasant dying. She was dictating another story to me yesterday when Shortcake walked up and said, "Oh... I've heard this one before. It's one of my favorites." 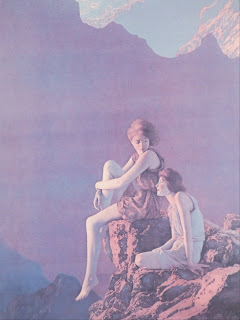 I think parents naturally have a desire to give their children what they feel they missed out on as a child. I always wanted a sister to share a room with, to share stories with, to share clothes with. Maybe I am idealizing sisterhood, but the thought of them lying in bed telling each other tales of fantasy and innocent romance makes me feel giddy. These are the stories I want to remember. This is a picture of our life that I want to capture.

(This picture hangs in the girl's room. It use to hang in mine.)