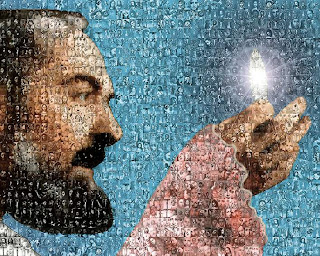 Back before BigBoy came along, the older children and I were living in South Texas with my mom while Husband was working here in North Texas. We were trying to sell our house and thought it would happen faster with the primary sources of chaos and disaster (3 children under the age of 5) located at the opposite end of the state. While I was there (feeling my sanity slowly slip away), I decided to busy our days with some dabbling in this crazy adventure called "home education". The Professor was four already; he should have been conjugating Latin verbs and composing his first symphony, right? (snicker) We also tried to make some connections with other homeschoolers in the area for some of that "socialization" that we all know homeschooled children lack. (snort)

I don't remember how I got "Linda's" number, but somehow I did and she invited me to some home school activities based out of a church across town including the upcoming All Saints Party. Everyone was supposed to bring some candy and a game or activity. I signed up for "Pin the Halo on the Saint".

All I had was a few holy cards, my large sketchpad and some yellow sticky notes (this was back when my hazard lights were flashing in the slow lane of the information super highway). It had been years since I had tried to do a pencil portrait so it must have been the Holy Spirit guiding my hand as I picked up that sketchpad and pencil. I looked through the holy cards and chose Padre Pio. Many nights during that time I found myself praying his "Don't Worry" prayer. (He was also pictured in profile so I thought he would be easier.) I drew the portrait which turned out surprisingly accurate, made halos out of the sticky notes and headed off to the party.

Well, it turned out to be one of those nights. The kids were fussy and my mom was feeling neglected so we decided to pack up St. George's sword, Helena's cross and Agnes' fuzzy little lamb and leave before the games got going. We had already had enough fun for one evening.

Most of the group, including Linda was in another room in the parish hall, so when I saw her husband step into the game room to grab the diaper bag, I asked him to please tell Linda we would have to leave early. He asked if I was taking the game with me. Well, of course I wasn't. I hoped the children would play the game and then, remembering how Linda had admired it when I taped it to the wall, I asked her husband to please offer it to her with my thanks for her kindness. A strange expression crept over his face and he said,"You know... she's going to cry." Hmmmmm. I didn't know my new friend was of a more sensitive nature but I figured that was his problem, not mine. : )

When the phone rang the next day, I didn't expect that the faucets would still be running. Linda was very emotional and thanked me profusely for the portrait. Really, it wasn't that good. Beards are very hard to do well and have you ever seen that man's nose? But this sweet, sobbing lady had a story to tell so I listened.

Her daughter "Laura" had been born with a very rare heart condition. The doctors had convinced her to try a risky surgical procedure. The surgery had been attempted before on others, but had not been successful. Unfortunately, without a successful surgery, the condition would be fatal. The day of the surgery, a friend had dropped off a pewter relic medal of the newly canonized St. Pio of Pietrelcina. Linda had never heard of this amazing saint, but grasping onto any and all hope, she asked the doctor if she could pin the medal to Laura's surgical gown. He agreed and then even allowed Linda to come in and kiss her unconscious daughter as she lay on the table ready for operation.

"Where is my miracle girl?" the doctor shouted as he burst into the hospital room the next day. He confessed he had not expected the surgery to succeed. They had allowed Laura special privileges (the medal and the kiss) only because the little girl's chance of survival was so slim. He explained to Linda when he let her kiss Laura, he believed she was kissing her goodbye.

Laura's medical information was documented in journals and at that time, Linda was told her daughter was the only patient to have survived the surgical procedure that corrected the condition. She credited the miracle to Padre Pio, a saint she knew nothing about. Prayers of thanksgiving were offered, the medal was saved in a special place and Linda delighted in seeing her little girl romp and play like a normal child.

The story could end there, but it doesn't.

One day, as she and Laura were flipping through a book of saints the little girl saw for the first time a color picture of the saint whose intercession had saved her life. "Mommy, that's the man who played with me" she said.

"What dear?" her mother stammered.

"That man. He played with me when I got cut." This was Laura's childish way of referring to her frightening ordeal. "He told me not to be afraid and played with me. Then I woke up."

She assured me this child had never seen a picture of this great man, had never even heard his name or his story. Linda herself didn't know much about him other than he was a new saint in Heaven and that she had pinned all of her hopes and fears on his intercession when she pinned that medal on her little girl's gown.

He not only came through... he was there.

Email ThisBlogThis!Share to TwitterShare to FacebookShare to Pinterest
Labels: Saints