Why haven't I called GEICO?

Forget car insurance! How about a 15% reduction in bugs! 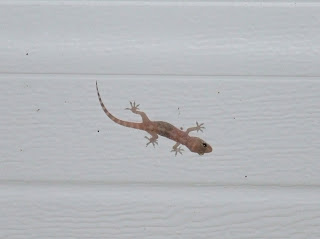 Do the Chinese have a year of the gecko because apparently, we are! I love to see these little guys scampering around... outside that is. I personally don't mind them inside, but Shortcake's love for all creatures great and small stops just short of these beady eyed, translucent little wall crawlers that like to scurry out from behind a roll of paper waiting to be turned into a timeline and under shelves filled with school books and supplies. Yep. That's where this picture comes in. 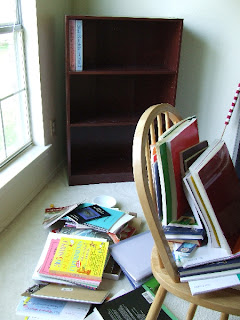 This was our second close encounter of a reptilian kind in the last week. The first one involved Sunshine defending her sister from one of these terrifying creatures by chasing it out from under their bed. She caught the little bugger and put him in a jar but unfortunately the 15% off he got was his tail which remained under the bed frightening Shortcake so much that she refused to go into the room until it was recovered. She worked herself into hysterics thinking about it wriggling and writhing right underneath her bottom bunk. I said, "Hey, at least you didn't have one land on your shoulder like Gramma did." Yeah... that didn't help.

This recent encounter involved the big bolt of paper (wait... I seriously had to ask Husband just now if it is called a bolt of paper. He informed me it is a roll of paper. Bolts are for fabric. And a ream is 500 sheets of paper but it used to be 480. Go figure.) Where was I? Oh yeah... the big roll of paper that is going to be our time line apparently was already being used as a summer vacation spot (I guess he didn't have much confidence in my plans). When he scampered across the room and behind the bookcase, no work could be done until the rescue effort was complete.

Our frightened little friend was returned to the great outdoors to eat his fill of the other creepy crawly and buzzing things. That 15 minutes of chaos and confusion better get me at least 15% or more!

Email ThisBlogThis!Share to TwitterShare to FacebookShare to Pinterest
Labels: Nature