Halloween: Yes or No

A conversation (not a debate) at the 4Real Forum prompted me to think about how much I don't know about what life is like in other parts of the country. I admit, I was surprised at the number of people who participate in the usual celebrations of Halloween. I don't mean to imply any kind of judgment on my part regarding those who dress up and go trick-or-treating, just a mathematical assumption that the percentage would have been more 50/50 considering it is a Catholic forum. I was discussing this with a dear friend, how I thought the scales would have been more level, and as someone who has lived all over this big ol' country, she helped put it in perspective for me.

I have lived in Texas all my life. I spent equal time in Central Texas and South Texas until I came to North Texas for college. We lived in a very rural area until I was 8 and then pretty much stayed in the suburbs. Our first home in South Texas was located on an L-shaped cul-de-sac so it was very private and protected. That is where most of my Halloween memories come from. We were allowed to go trick-or-treating around the cul-de-sac and then only a few houses down the connecting street. I might not remember their names, but I can tell you who lived in just about every home we went to. If we didn't know who lived there, we didn't ring the bell.

My brother and I rarely had store bought costumes. We raided mom and dad's closet and put together creative outfits like a hobo, a punk bride (think Cyndi Lauper in a bride's dress), and a clown (gotta love Dad's old 70's ties). My parents really got into Halloween. My mom always dressed up to hand out the candy and my Dad tried to find ways to make our front courtyard even more spooky every year. He was also one of those Dads who would hide in the trees and scare people (usually not the little kids, mostly just the teenagers because he thought they deserved it).

When I think about my reasons for opting out of Halloween, I realized... it was to avoid people like my parents! OK. Not entirely, but kind of!

My kids have always hated anything with even a remotely spooky feel to it. Ghosts are called marshmallow men, black cats are just cute little kitties and skeletons... well, my kids still don't like skeletons. One time I bought The Professor some PJ's that had this super cool skateboard guy on the front. He brought them to me in a huff when he spotted a skull amidst the swirly designs and decorations. He was right! Back they went.

Shortcake has always been prone to nightmares. She is like her mama. Anything that she sees or hears after the 1pm hour has the potential to come back and haunt her before or during bedtime. My father made me watch Gladiator when he came to visit one night. He thought that since I had seen the Colosseum up close and personal, this movie would speak to me. Yeah... I heard it calling my name at 1 AM, 2 AM, 3AM.... 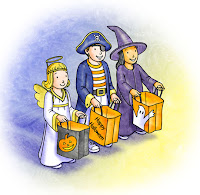 The fact of the matter is that there might be some people today living in a neighborhood very much like the one I grew up in whose children are not terrified by decorations and who don't mind walking through smoke filled courtyards and getting a handful of candy from a green faced woman wearing a black pointy hat because they know that it is really Mrs. So-and-so who brought a ham over when great-grandpa George passed away. I remember what that was like and how much fun we thought it was (um...the candy part, not the grandpa George part). I am sad to say, that's not my street anymore and those kids I knew and had fun with have grown up into the man who answers his door wearing a real live giant snake around his neck or the person who walks around all day dressed as the Prince of Lies (not a little devil with horns on a headband... real horns affixed to his bald head with spirit gum and stage makeup)!

I like celebrating All Hallows Eve. We have a big party with all of the cousins invited. We play games and eat yummy food. We do carve pumpkins and roast the seeds, but we stick to silly faces or saintly symbols and my kids have never asked to do it otherwise. We dress up as saints or as the people under their patronage ( a chef for Saint Martha or a fireman for St. Florian). My kids play dress up all the time with their usual costumes. There is a cowgirl
doing her Math as I type right now. Batman and Spiderman frequently show up in my bathroom needing a wipe so they aren't missing out on anything. With a mama who studied theater, lets just say that our dress up box overfloweth! All. day. long.

But, unless you think I am some sort of Halloween Scrooge, I always put a bucket of candy on the porch with a sign. It reads... Party in Progress! Happy All Hallows Eve!

P.S. How do you celebrate and why?