The Feast of St. Charles Borromeo 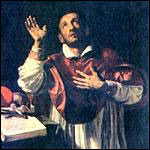 If teaching and preaching is your job, then study diligently and apply yourself to whatever is necessary for doing the job well. Be sure that you first preach by the way you live. If you do not, people will notice that you say one thing, but live otherwise, and your words will bring only cynical laughter and a derisive shake of the head.

We must meditate before, during and after everything we do. The prophet says: "I will pray, and then I will understand." ~ St. Charles Borromeo

Today is a special feast day on my calendar (and a few of you know why) so here is a little information about St. Charles.

Also known as Carlo Borromeo; Father of the Clergy; Apostle to the Council of Trent

Saint Charles spent his life and fortune in the service of the people of his diocese. He directed and fervently enforced the decrees of the Council of Trent, fought tirelessly for peace in the wake of the storm caused by Martin Luther, founded schools for the poor, seminaries for clerics, hospitals for the sick, conducted synods, instituted children's Sunday school, did great public and private penance, and worked among the sick and dying, leading his people by example.

I love reading about the patronages of the saints. Sometimes a connection is obvious. St. Nicholas is the patron saint of children, St. Dominic Savio is the patron of choir boys, etc.... But as I've pondered before, sometimes the lists of patronage inspire much meditation. Apple Orchards? Really. Not apple farmers, but rather, their orchards. Well...ok.

I wish I had known about St. Charles as a freshman in college. Maybe he could have helped with that ulcer I developed. Then again, considering the spiritual directors I found there, the fabulous clergy I met, oh and the husband whose middle name is Charles... maybe he had more influence than I new. Thank you dear saintly friend of mine!