I can't remember the last time I did three posts in one day but something happened today that I just had to share, so bear with me...

This morning, I had a notion that we should go to Daily Mass. Not really a notion, maybe more like an inkling but I have to admit that my heart really wasn't in it. I got up and got dressed, listened to an audiobook, checked my email, read some blogs and then got around to reminding the kids that we were going to try to get to Mass. I am usually better about reminding them what their breakfast cut off time is, but like I said... my heart wasn't in it today. So when Sunshine realized that she had gone "over time" I very quickly thought well, we just won't go today. I didn't want to have a blubbering child on my hands when she realized that she wouldn't be able to go to communion. Turns out, that is what I had anyway. Once she calmed down, I explained the situation to her and like the amazing girl she is she said, "Mom, I'd like to go anyway even if I can't receive Our Lord." Well, I couldn't say no to that so off we went.

We arrived just in time to see our favorite priest round up the altar boys and begin the profession. This priest is famous for his Daily Mass homilies... not only do they pack a faith filled, powerful punch, but they are usually longer than 3 sentences! I didn't want to get Sunshine's hopes up, but there was a chance, if Father was in his usual good mood that she would get to receive communion. I started watching the clock.

Not only was he in a good mood, but Father was in rare form today! Every prayer was said slowly and deliberately. The readings were each a good length and his homily... rocked!

Not only did it stretch the length of Mass by more than enough to allow Sunshine to receive Our Lord, but it caught the eyes, ears and hearts of all of us.

Father's homily began with a story of a church in Italy that was damaged in the war. The soldiers who came to the church found a statue of Our Lord that was terribly injured. They painstakingly rebuilt the statue piece by fragmented piece except for the hands. They were nowhere to be found. The soldiers decided that they must have been pulverized and would never be restored. So they left Our Lord, as He was now, without any hands and placed a sign in front that said,
"I have no hands but yours."
Now this story has been told many different times by many different people and with enough alteration of detail to make one doubt it's veracity, but that didn't matter to us today. This story touched us, all of us! The children were talking about it as we headed out of the Church. They were talking about it in the grocery store we darted into before we headed home and they were talking about it in the car as the garage door opened and we pulled in and saw what has been sitting in front of us for months... 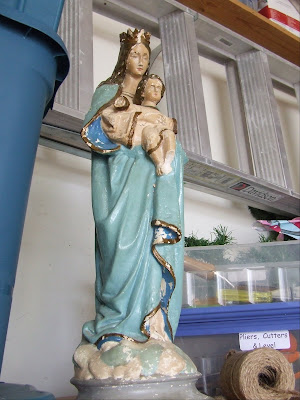 This statue belonged to my mother's aunt; a woman who married very late in life and never had any children of her own. She was the only girl born to a family of 7 boys. She spent her life serving the church, taking care of three of her brothers who became priests and enjoying the many nieces and nephews her other brothers provided her. Since her husband had died many years before, when Aunt Mary passed away, most of her possessions were claimed by family members or sold. But no one wanted this tattered Mother and Child. My mother, knowing my weakness for old religious items, brought them to me thinking I might like the challenge of repairing them. They have been out in the garage for months while I have pondered how I would proceed or even just begin the overhaul.

Email ThisBlogThis!Share to TwitterShare to FacebookShare to Pinterest
Labels: Faith, Our Lady