~The inspiration~
The kids have been having fun playing this game during their free computer time. OK, ok... Mom and Dad have too! 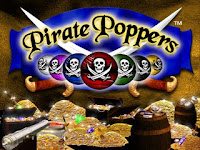 The product!
Where there is a sea, there must be pirates! 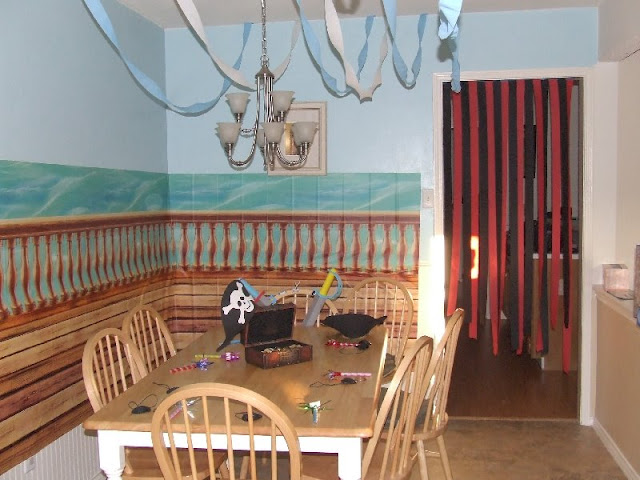 We found this vinyl ship's deck perfectly suited to our needs. It required no adhesive at all. Static cling kept it stuck to the walls of the dining area for the whole day!
And it is completely reusable! 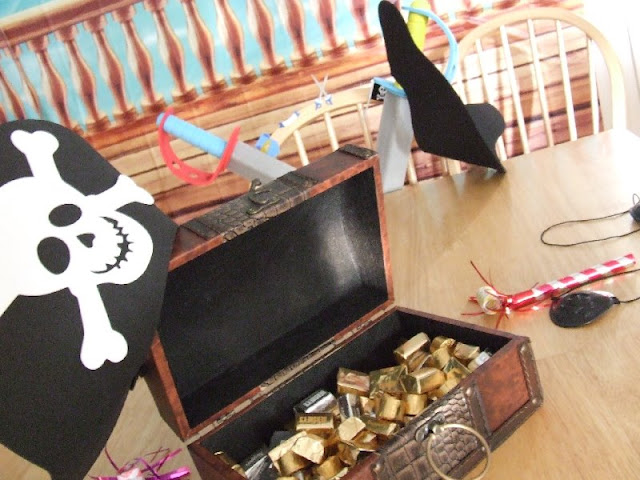 Table decorations came from the dress up box and the Target Dollar Spot which just happened to have these foam pirate hats 2 for a dollar a few weeks ago. 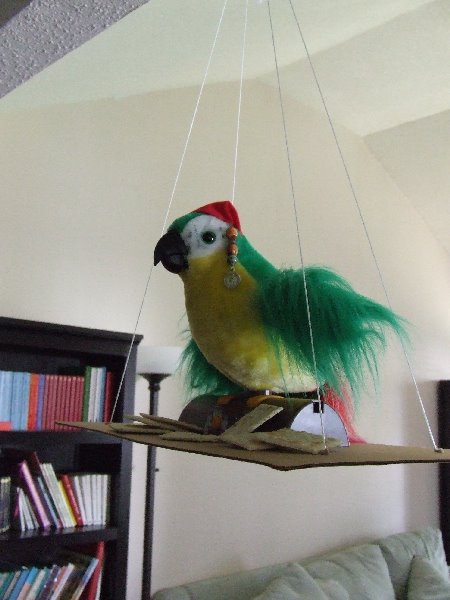 Every pirate ship needs a parrot! This guy usually stays locked away in a closet because he is so
special. Today he was let out of his cage. 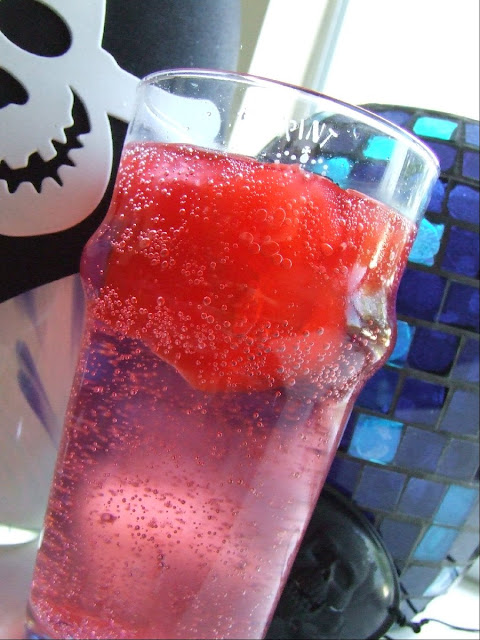 Bring me one noggin of rum now won't ya matey!Actually, ginger ale chilled with Hawaiian punch ice cubes that we told the birthday boy were rubies in his pirate's ale! 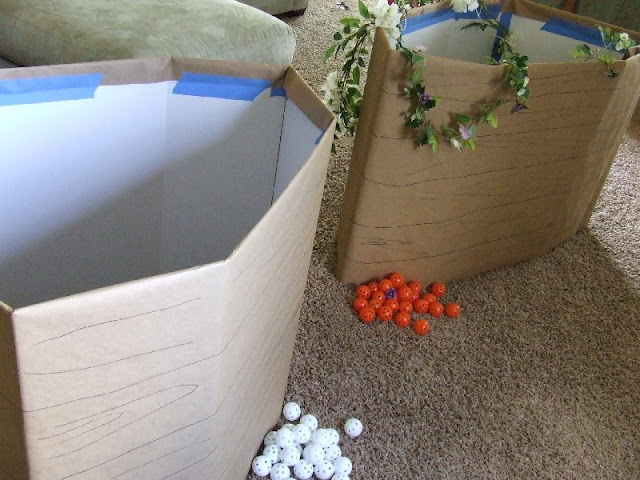 The sea has never been friendly to man. At most it has been the accomplice of human restlessness.
Cannon Bomb:
We took pieces of cardboard and taped them together to make dingies. Brown wrapping paper and a sharpie marker were the only decorations until the girls got a hold of one and turned it into the HMS Floracita. Two bags of practice golf balls were our cannon balls. Different colors are not necessary. It was all I could find.
Here is how we played the game: Put one person in each dingy with the balls. Set the timer for thirty seconds. Each person has to try to throw their cannonballs into the other ship. Any that fall outside the ship are in the water and are off limits. You are allowed to pick up any that land inside of your ship and return fire. When the timer beeps, count the number of cannon balls in each dingy. The one with the most is sunk and the other person wins the game. 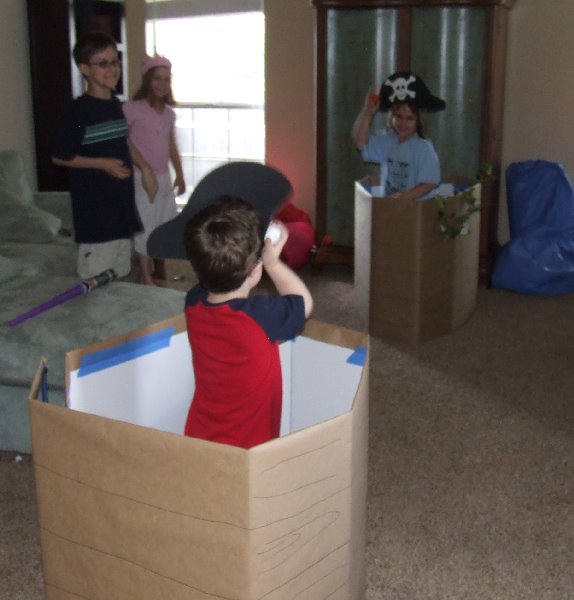 Oh... and the pirate hats must stay on. It added a slapstick element that was just hilarious!
We also played our own version of Pirate Poppers with the dart board and balloons. I can't tell you how much fun my kids had popping balloons on a dart board. We just might save the rest of the them for a boring day in July!


In the interest of full disclosure, I should tell you that this was the cake that almost wasn't. My original idea was to pipe frosting planks all over it. I got about 3/4 of the way done when the cake started to split right down the middle. Thank goodness we had extra hands in the kitchen because I grabbed it on the ends while everyone else started shoving in bamboo skewers. I took a spatula and started scraping off all of my beautiful planks and just left a very thin layer of chocolate on the outside. I think the weight of the frosting combined with the weight of the cake (I used pound cake so that it would be firm enough to stand up) is what wrecked the ship. I was able to pipe some extra frosting inside the crack, push it back together, secure it with proper bamboo skewers that didn't poke out the front end and pop it in the fridge to let the frosting firm up. That, along with some wedge shaped blocks covered in Cling Wrap at either end did the trick. They were hidden under the frosting waves. A ship wrecked cake wouldn't have been a compete disaster, but I was glad it worked out in the end. 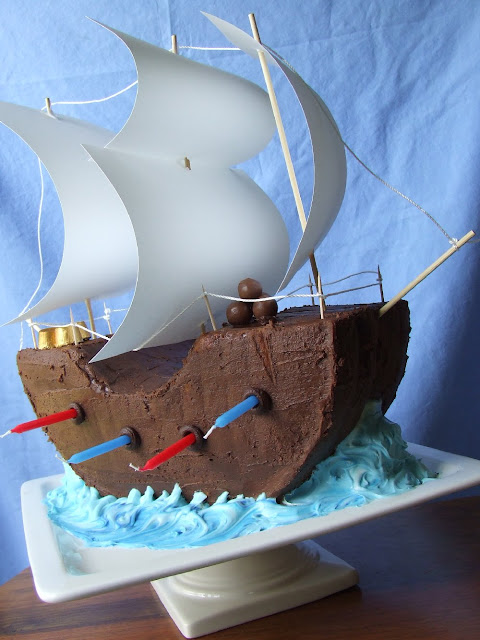 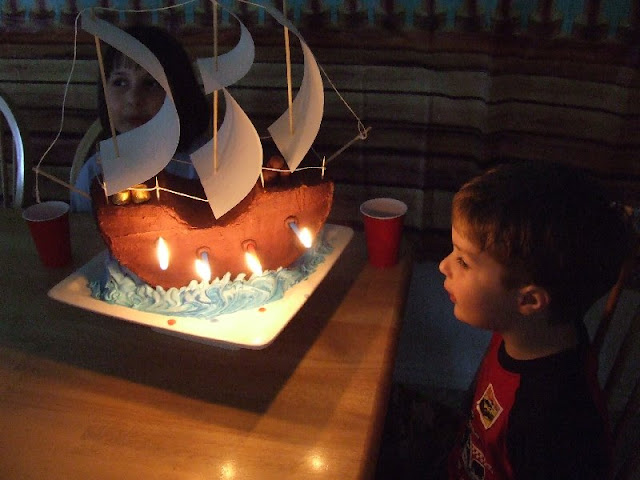 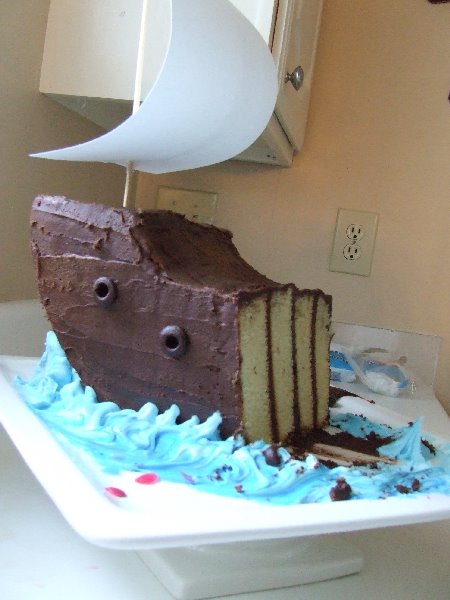 Abandon ship! Anyone in the area who wants some cake, come on over. I've got half a pirate ship in my fridge. Boy, that was fun to say! Although, you might have to do some dishes or laundry to get a slice!

Email ThisBlogThis!Share to TwitterShare to FacebookShare to Pinterest
Labels: Birthdays, Cakes, My Guys