That means there are babies around! Sunshine's godfather welcomed his first child into the world this summer. Mother and daughter are doing fine (we hear but have yet to see for ourselves, ahem)!

This bright, cheerful quiltie is for her: 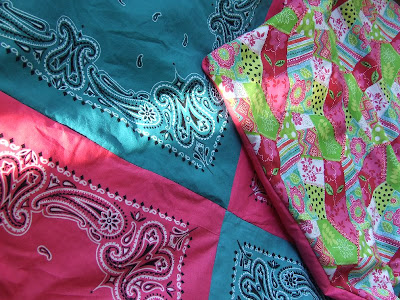 And this one is for a special baby whose young mother chose life when many others in her shoes would have chosen differently. 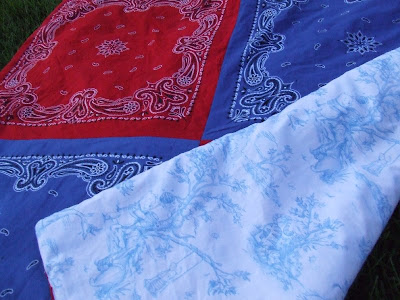 I love the Winnie the Pooh toile on the back side and I thought the red bandannas really make the blues pop! I have another one to make come December, but it just isn't as much fun making a "gender neutral" quiltie so I will have to wait until that little one makes his or her appearance.

And then there is my friend Liz who has suddenly found herself expecting again 6 years after her last miscarriage and ten and a half years after her only child was born. It was Liz who found the first quiltie pattern in a magazine and made a deal with the only friend she had with a sewing machine; she would buy the materials if I would sew them. It was her daughter who dubbed them "Quilties". Liz is nine weeks pregnant and even though Baby gave us all quite a scare yesterday, that little one will have a quiltie for every day of the week if he or she keeps smiling and waving to her mama!