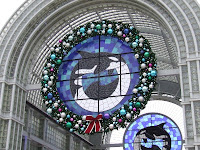 So I was telling my MIL about our trip to Sea World and when I mentioned that they advertised "Holiday Shows" during the week of Thanksgiving she asked, "Which holiday would that be?" Really, who can blame her? In today's world where people refuse to sell Christmas trees or Christmas gifts, Christians feel like our holiday is the elephant in the living room. 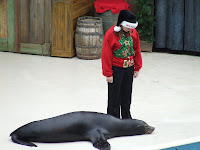 Everyone is celebrating it, but we're not allowed to talk about it. So, I was pleasantly pleased to be able to give my MIL a positive report regarding these holiday shows. They were Christmas shows! And they even said so!!!

While the sea lions were trying to help their trainer find her Christmas cheer, there was a Miracle being celebrated over at Shamu's stadium. They opened the show with Christmas caroling singing a mix of religious and secular songs. 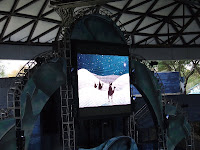 Then we turned our attention to the JumboTron to see the wise men seeking the newborn King and to listen to the announcer talk about the miracle of the child born to save us all. Wow. It really was a beautiful show. 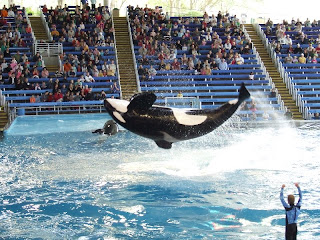 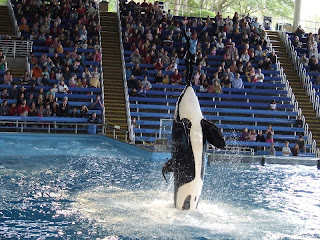 But, the dolphin show was a particular favorite. 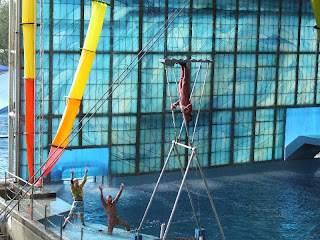 Due to the heavy acrobatics and diving skills in this show, it was the same one you can see year round. There is no way a Santa hat would survive a 30 foot drop! There is a man who performs a funny water skit before the show starts and then acts as a "silly master of ceremonies" throughout. BigBoy dubbed him the Chicken Man since he pretended to be too scared to dive into the pool at one point. 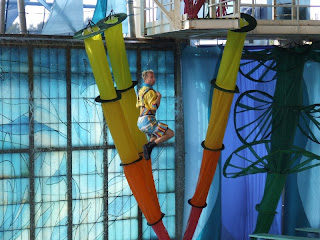 BigBoy loved him! He wanted his picture taken with the Chicken Man afterwards so we made our way through the crowd in order to snap a shot. While they were smiling for the camera... 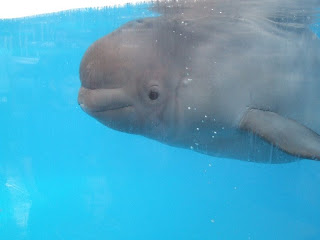 ...this little baby beluga came up to the glass to say hello. BigBoy, when telling the story later says, "That's the baby beluga that wanted to be in my picture! I love him." We waved and signed "whale" at him (I am assuming "beluga" has to be fingerspelled) and even taught the Chicken Man how to sign whale (he asked).

Actually, thanks to Signing Time #9 The Zoo Train, we signed to the penguins, the dolphins, the star fish, the ducks and the sharks from a distance though (too scary for BigBoy and too far to walk for Mom and Grammie!) Hey, we're not wimps! We had just been walking since 9:30 that morning and thought 7 hours was plenty!

Thank you Grammie for a lovely Thanksgiving memory that is threatening to become a tradition!

P.S. That plug up above for Signing Time is my gentle reminder that awesome, educational Christmas gifts are just a click away!!! We have been so blessed by the two sets we own and I know they would benefit so many other families! I don't get a commission, I just really love their products!