(If you have not read the Ranger's Apprentice books, then most of this isn't going to make sense. I highly recommend you go read the first book right now and then come back. I'll wait! : )

I love it when my kids choose a theme for their birthday that I can really get into. Not only was The Professor excited, but having enjoyed these books with him, I was too! This was providential because that enthusiasm spurred me to get some of my plans accomplished early so that when the ugly hand of illness smacked me down, all was not lost. 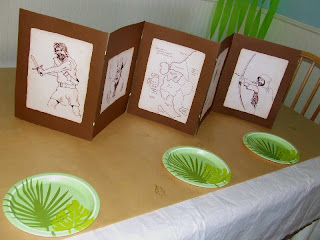 The centerpiece is made from ribbon sandwiched in between cardstock and printed copies of drawings from the author's website. We also stamped the brown paper runner with gold and silver oak leaves which are the symbol of the Rangers. You can't see them here, but Husband decorated the whole room with streamers to make it really festive.
Craft 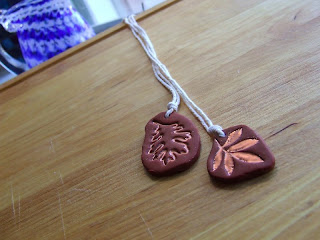 We made our own pendants in honor of the ones that the apprentices wear out of Sculpey, rubber stamps and embossing powder. The boys chose an oak leaf and the girls chose one that resembled a laurel branch. They haven't read the books yet, but The Professor told them that Alyss, a female apprentice in the Diplomatic Service, wears a laurel branch pin.
Food 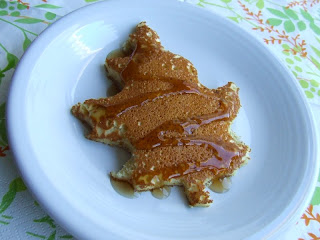 The Professor cracked up when he read this scene in Book Three so we decided that pancakes for breakfast were in order and an oak leaf cookie cutter made them even more fun.
Cake
My biggest disappointment was that because I have been sick for the past week and a half, I was not going to be able to make the cake which is something I love. He had asked for a map of Araluen cake pretty early on and I had even started practicing my piping. But when I realized that the last thing I needed to be doing while coughing and hacking was to be standing over something other people were going to be eating, I started exploring my options. Plan B was to just have a photo cake made using a printed copy of the map. That plan, while not quite a knee slapper, still must have made God chuckle. Every single photo cake machine in every single bakery within a 10 mile radius was broken in some way. I. kid. you. not!
So, plan C... 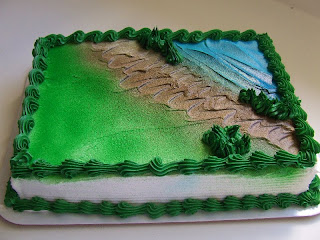 Take one Field and Stream Camping cake from your local Bullseye Superstore. Be sure you ask them NOT to put the tent, kayak and fire pit on the cake, just in a baggie on the side and don't pull your hair out when they ask you twenty thousand times in a skeptical tone of voice, "You don't want anything on top? You don't want anything written?" 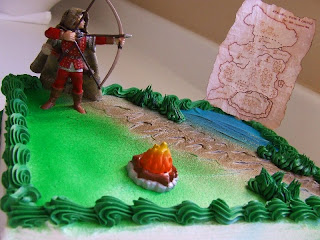 Add one Sleich archer figure with a Mommy stitched cloak and one worn, torn, crumpled and burned copy of the map (taped to a popsicle stick) for character. Now, go ahead and add the fire pit for fun and for those slightly confused but sweet ladies in the bakery.

I really like the way it looked (no comment on the taste) and ended up being happier with it than the Plan A cake I had in my head. He was thrilled and couldn't wait to pluck that archer off and go play with it. Right now, he is diving into Book 4 and waiting for me to finish hemming the Ranger's cloak he was hoping for. He got it, I just have to finish it. But that is a post and a chore for another day!

Email ThisBlogThis!Share to TwitterShare to FacebookShare to Pinterest
Labels: Birthdays, My Guys