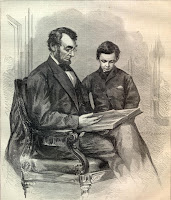 Today was the bicentennial anniversary of President Abraham Lincoln's birthday! We did a little celebrating today by making Mock Penny Rugs and a Lincoln Log. What's a penny rug, you ask?
From this website:
Penny rugs are not actual rugs for the floor, but decorative coverings for beds, tables and mantles. They were even used as wall hangings. They seemed to have started around the time of the civil war in the United States. They are made out of felted wool scraps that are appliquéd with a blanket stitch to a wool background. Some designs feature circles (or pennies). Coins such as pennies were used as templates for the circle appliqués, thus the name penny rug.

So, while I would have loved to sit and teach my girls to stitch together tiny pieces of felt to make our own penny rugs, we opted for a modern version. I found a 1 1/4 inch circle paper punch and a 3/4 inch circle paper punch at the craft store and went to town punching circles from my stash of pretty paper. A black paper table cloth provided a nice neutral backing and a glue stick made the work go much quicker than needle and thread would have. 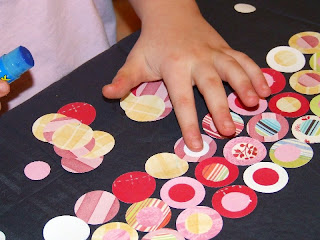 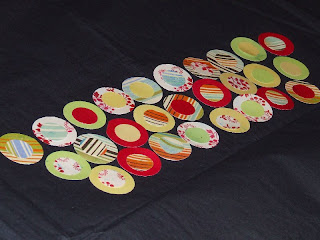 We read the story of Mr. Lincoln's Whiskers and ate Carrot Coins and Lanky Celery Sticks with our dinner. Dessert was our own snow covered Lincoln Log that was proclaimed a great success. I thought the filling was a bit soft. I usually like to use some sort of cream cheese filling for a cake roll but only had a box of white chocolate pudding and Cool Whip on hand. Nobody seemed to mind! 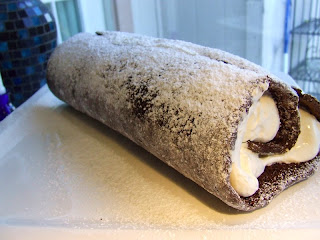 And for Mom's viewing pleasure only (language warning!) Victor Garber singing the part of John Wilkes Booth in Stephen Sondheim's Assassins. That man can SING!