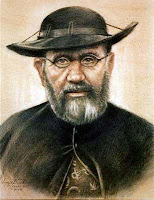 Blessed Joseph de Veuster, better known as Fr. Damien of Molokai, is scheduled to be canonized this October, but the day he entered his eternal reward was April 15th even though his feast day will be on May 10th. Confused? So was I. This helps clear up the confusion, especially the last line:

Before Damien left Belgium for the missions, he visited a shrine to the Blessed Mother. He asked her for 12 years of missionary service. It is interesting to note that it was in his 12th year in the leper colony that he was diagnosed with the most virulent form of leprosy. He lived and worked for 4 more years before succumbing to the disease on April 15, 1889. He was 49 years old. On Pentecost Sunday, 1995,Pope John Paul II declared Father Damien among the "Blessed" and gave him the title "Servant of Humanity." Father Damien's Feast Day is May 10, the day he arrived to serve the Leprosarium in 1873.

As someone over at the forum said, "He was so good he get's two celebrations!" More about his life here.

Blessed Damien of Molokai Coloring Page ~ based on the beautiful portrait from the website above. I can't read the artist's name because it is so small so if you know who it is I'd love to know!