Listen, O Reader, and you shall hear
Of our midnight adventure with this light right here... 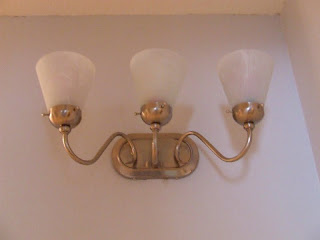 There was a miracle performed here last night right smack in the middle of my bathroom.

Since we moved here almost 7 years ago, Husband has been doing most of our home improvement projects and that includes electrical wiring. Not bad for a colorblind man! We have learned a lot along the way. We have learned that the people who built our house were not the brightest bulbs in the box. We have learned that they must have been very clumsy. Why else would you drop whole boxes of nails inside the walls of each bathroom? We learned that one of them wore size ten boots thanks to the shoe print he left on the inside of the closet wall that backs up our bathroom. We have often times encountered situations that make us scratch our heads and say, "Now, why in the world would they have done that?" We usually respond with, "Oh well, I guess we'll just fix it." Last night we learned our lesson.

Now, to our credit, sometimes this situation has worked out just fine...

"Why in the world did they just rip the wall open with a claw hammer and mount the lighting fixture to the drywall instead of installing an electrical box like a civilized human being? Oh well, I guess we'll just fix it." And he did.

But a few weeks ago, we found ourselves saying, "Why in the world would they have two sets of wires connected to this one lighting fixture? Oh well, I guess we'll just fix it." Husband had to pop the staple securing it to the stud (there was plenty of room thanks to the claw hammer sized hole and lack of electrical box), capped off the extra set, tucked them back into the wall and went on his way moving the other set to the new location.

He then spent many, many, many hours sanding the wall smooth, putting up two skim coats of drywall compound, and then finished with a decorative hand troweled texture. They were gorgeous and the *color we picked was like the icing on the cake after I finished painting yesterday.

Last night, Husband wired both new vanity bars (one over each sink), flipped the switch and... one light stayed dark. Hmmmmm? He double checked the connections to make sure they hadn't slipped off and tried again. No go.

Well, after speaking to his not-colorblind brother-in-law who has done all of his own wiring, he had a better picture of the situation. Serial wiring. Not the way they do it in Ohio, but apparently fine in Texas. The fixture over one sink was wired into the fixture over the other. Both were controlled by the same switch, so the extra set of wires now disconnected and lying buried underneath three layers of drywall compound and two coats of Seashore Fog were the ones needed to provide power to this dead lamp.

Husband could think of no other way to get to them besides ripping the wall open again.

Wise Brother-In-Law suggested heading up to the attic to connect the two with a new set of wires. We should be able to fish out the working wires and connect those to a new set of wires for the dead fixture. Good idea! Except for the staples. Remember the staple Husband popped that kept the wires anchored to the stud. More like them were all over the attic and under the header boards where the working wires were anchored unreachable by human hands. Stuck tight. I guess they don't do that in Ohio either.

"Wait," I said. "Why don't you try fishing it out with something like a wire hanger?" Oh shoot. We don't have any wire hangers. Call me Mommy Dearest, but I have this thing about wire hangers. Can't stand them. Never use them. Don't keep them. Except... here is one in the back of the closet. How did that get there? How did it stay hidden there? I really couldn't say but here it was needed and here it was.

We twisted it into shape and Husband inserted it through the hole. Did I really think this would work? No. I thought it might give us time to think of another solution, any solution besides ripping a hole in our beautiful wall.

"Who should we pray to? Is there a patron saint of electricians? How about fishermen?" We were fishing for the wire after all. Husband suggested St. Anthony and St. Jude. How about we throw Padre Pio in there for good measure? I used to keep a statue of him on the vanity that backed up to that very wall. I started praying. Husband went fishing. He scraped the hanger across the backside of the wall a couple of times and said that he could hear the wire moving around in there. Remember the staple he removed before capping them off? Good move on his part. He twisted the hanger and tried to grab it, pulling it up towards the hole. Suddenly, a green cap appeared just inside of the opening. He grabbed it and after a significant amount of pulling and twisting, it was on our side of the wall! He quickly rescued the two other caps and stood back in disbelief.

A few minutes later... I was speechless. Husband was amazed. The light was on. And the wall was perfectly intact. 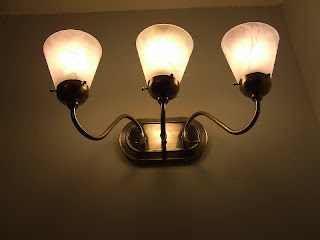 After we each threw the switch and watched both lights come on about twenty times, we joked about St. Anthony, St. Jude and St. Pio all hanging out in our attic. They were probably scratching their heads remarking, "Now why in the world would these crazy kids do that? Oh well, I guess we'll just fix it."

*The color is a soft blue grey but for some reason is looking weird in the pictures.