Another area we have had organizational success in is the LEGO arena. Every mother who has children who have LEGOs is probably wrestling with figuring out how to store them. The biggest problem around here is usually... what's to be done with the creations that aren't ready to be dismantled and returned to the LEGO box? We aren't the "keep all the sets labeled in separate baggies with their manuals" kind of people. I do store all the manuals together in a box so they can be used for future reference, but I let the children decide what they want to use as a set and what they want to use to create their own designs. We usually just keep anything that is waiting to be used creatively in a box. The children are more than willing to dig around to find whatever their invention demands. But the angst sets in when at the end of the day I want to put the created things back in the LEGO box but the children are afraid that they will be sucked into the plastic quicksand and destroyed forever.
So, Husband and I had an idea to create a box or tray of sorts to store these things in that could slide under the bed, but it needed to be easily accessible if it was going to work. 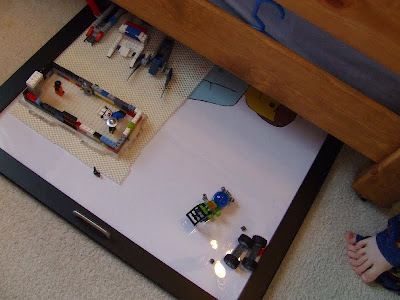 Please ignore random hangers stuck into bed frames. I have no idea why it's there but I'm sure the owner of those sweet little toes would have a good reason.
I picked up a very large poster frame and drilled some holes for 3 inch handles. The poster frame was much lighter than a regular frame but still had a lip around the edge so that little pieces can't roll off and get lost. Also, it's covered in plexiglass which is lighter than regular glass. 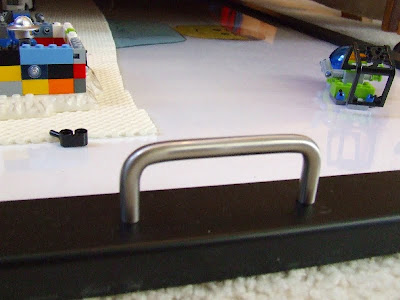 A little piece of nonslip keeps the pieces with wheels from rolling every time the tray is slid under BigBoy's bed. The boys pull it out and put it away as it slides easily over the carpet. 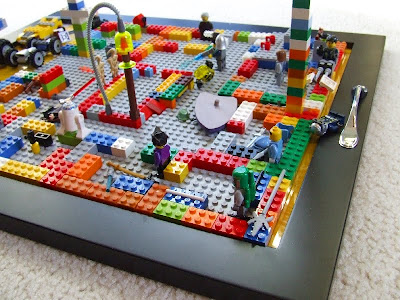 It worked so well that I made a smaller version for The Professor's large 15 x 15-inch building plate. He has created a model called "Fort Brick" and frequently builds and rebuilds different sections. He sometimes carries it to different locations to work on it but these extra large building plates bend and flex a lot. The homemade tray puts an end to that. I tried to find an actual tray first, but 15 x 15 is an odd size and most weren't wide enough. I ended up using a 16 x 24 inch frame, I think which is perfect because it gives him extra room on the sides to put mini-figures or any small vehicles he has built.

Email ThisBlogThis!Share to TwitterShare to FacebookShare to Pinterest
Labels: Organize it