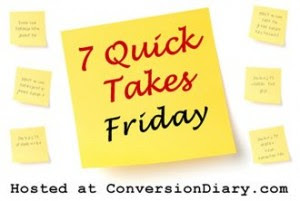 ~1~
I haven't done one of these in a long time (read: over a year), but it seems like a good idea today. I feel inspired. Maybe it's the great company we had staying with us this week. Maybe it's the cooler weather. I don't know but I feel really good about my ability to actually come up with 7 random thoughts to share.

~2~
We have had the pleasure of hosting the sweet younger sister of a friend while she waited anxiously to begin her life at college this week. She arrived here in town on Tuesday and delighted everyone with her bubbly personality, especially the girls (who talked her ear off). Good thing she's used to entertaining lots of nieces and nephews.

~4~
Before Jessica's little sis moved into the dorm, we took her for a quick tour around campus which surprisingly hadn't changed that much since Husband and I were there. It felt very strange to be walking around that place again with my children alongside. We ran into the president of the university who asked if The Professor was a sophomore or junior in high school. Hah! Not yet, buddy!

~5~
After watching all the sweet, giggly girls of the class of 2014 move into the same dorm I moved into waaaaaaaay back in 1992 (when most of these girls were born), my girls have decided that when they go to college, they want to share a room. I pointed out to them....... they already do.

~6~
Have I mentioned the unseasonably cooler temperatures? I mean seriously! This is a gift and we here in the Lone Star State know it and appreciate it. It is only 92 outside right now with a low of 67 expected tonight. You know, that makes all the difference. Those summer days when it never drops below 80 just sap your strength. You feel like there is no coolness to the day other than the man-made variety. It just goes from warm to hot and back to warm. Unfortunately, it probably won't last, but we are seizing the opportunity to get a little more done. Maybe this Fall will be a little more relaxing than usual, instead of crammed full of projects that just can't be done when it's 112 degrees outside.

~7~
Hey, #7! Our school year is in full swing, but has had a few bumps along the way. That is one reason I like starting earlier rather than later. I am a little disappointed that BigBoy won't be using the Math-U-See Alpha program that I thought he would really enjoy. We tried it and the manipulatives seemed to confuse him more than help him. If he understands the math concepts without needing manipulatives, I just can't see plugging along with a program that is heavily manipulative based.

Thanks to Jen for hosting even though she is digitally packing up and cleaning out.
That's all for now. Time to go figure out what's for dinner!