I need a reminder to K.I.S.S. sometimes. No, not my hubby. That's easy to remember when you have a hubby as cute as mine! (Awwww, he's blushing right now, I just know it!: )

I over think things. All. The. Time. I know you know what I'm talking about. At least, some of you do... right! RIGHT?

Sometimes, I hit on a solution so efficient that I almost miss it because, of course, I tend to think that it can't really be that easy. But in this case, it turned out to be. One of the things I wanted to tackle this summer was our bookcases. We have two of them in the room we call the play room. It's the room right off our kitchen/dining nook and where the kids used to congregate most often to play when they were tinier. Sniff, sniff! Right now, it's mostly used as a reading room because of the tall bookshelves and the fact that it gets the least amount of afternoon sun thereby making it the coolest room in the house... literally. 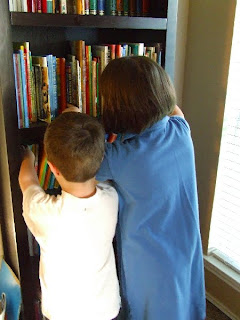 My kids know how to put books away in theory, but let's face it, during clean up time, they usually aim for the shelf closest to their line of vision no matter how much that shelf is already overflowing. Well, I have been wanting to organize these bookshelves for years now... YEARS! And not just organize, but come up with an organizational system that provides long term self maintenance. I have been sidetracked many a time by pondering things like library sciences, homeschooling unit groupings, visual appeal,  etc. Now, I know that there are some people who have successfully organized their books by subject or author, but the problem I have always found with that is that some books on the same subject or by the same author are vastly different in size which doesn't make for tidy looking shelves in my mind's eye. 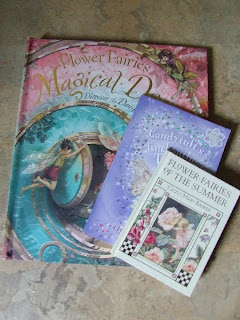 See?
So, ultimately, I decided what I cared about most was tidy shelves with books neatly standing or stacked so that the spines can be seen. That's how you find a book when you are looking for one. But I didn't want to just organize the books and end up back in the same place in 3 months with bulging middle shelves and empty bottom ones. Remember, long term self maintenance was one of my goals.

So here is what worked for me...

After Husband and I organized the shelves, putting like sized books together and some series in order, I labeled each shelf with a letter from the alphabet using a sticky note and then wrote that letter on the inside corner of each one of those books on that shelf. 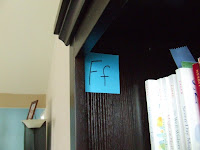 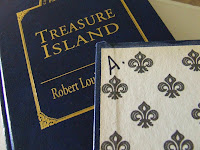 When a book gets left behind on the couch, breakfast table, floor, etc.... a quick flip of the cover tells us where it belongs. 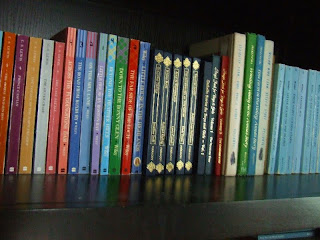 I've been living with this for a few weeks and my shelves are as neat and tidy as they were the day we organized them. My kids have been pulling off reading material and putting it back with ease. They have even discovered some "new" books that had long been hidden at the back of overstuffed shelves.

There are other bookshelves in this house, mind you. Each bedroom has a bookshelf filled with the precious treasures that my kids like to keep close. I have not labeled those so when we find an unlabeled book lying around, we know that it belongs in a bedroom. I did label three of my schoolbook shelves, but I am more in control of those books and when they are read, so it was only mildly necessary.

I'll let you know how this system holds up after a few months of use for the curious.