On this glorious feast of Our Lady's birth

Let me introduce you a little more to our little lady who is named for our dear Heavenly Mother under one of her most beloved titles... 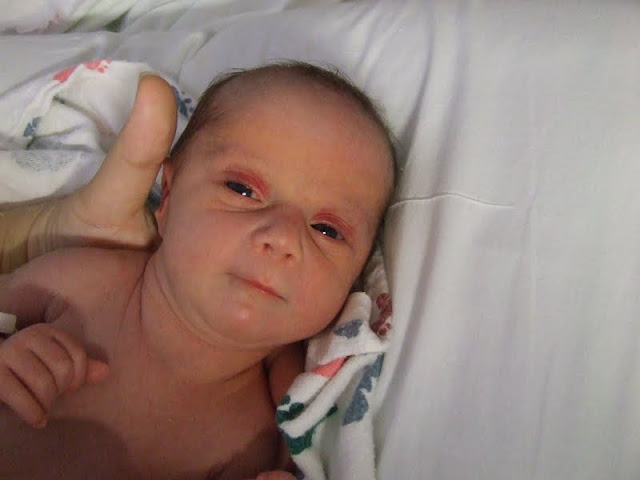 This is Avila Ami  (or Baby Ah-lah-lah, according to the two year old speak of Baby O). She has only been outside the womb for not even a week, but we can tell she already has a magnetic personality based on the way her siblings flock to her every chance they get. BigBoy even commented this morning, "Why was I ever mopey about a little sister?" He originally thought a little brother would be a better idea but understands now that God knows best.

She is the teeniest, tiniest baby I have ever had, weighing a full two pounds less than The Professor when he was born. I can't tell you the number of times we've all said, "She's sooooo tiny!" because she is!!!

Obviously, her first name comes from St. Teresa of Avila, who was a spiritual mother to St. Therese and all the Carmelites, who's intercession we are most thankful for regarding this little one's presence in our family. It also means "little bird" which seemed to fit the direction her room was shaping up! Now Husband wasn't keen on it right away. He doesn't like "place names" that much, you know... Cheyenne, Dakota, Georgia. But he came around to Avila all on his own, especially after seeing a picture of Margaret's little First Communicant in Faith and Family magazine and realizing that she was a fairly normal kid so maybe it wasn't too weird of a name after all. :)

As Margaret pointed out, her middle name can be pronounced "uh-ME" like the french word for loved one or friend, "amie". But since she will most likely be spending the bulk of her childhood in Texas, it will also be pronounced "Amy" because it's just easier to say it that way and have people understand... I guess it just depends on whether or not I'm in a foreign frame of mind at the time.

Now, I had spent some time looking at September feast days and talking with this little one about which days would make a great birthday. (I will write up her birth story soon, once the shock and awe wears off a little. Suffice it to say that the Holy Spirit was in charge of this birth plan and we know for a fact that "miracle" is not too melodramatic to describe the situation at all.) The 5th was Blessed Mother Teresa's feast day. Today, the 8th, is the birthday of the Mother of God, who wouldn't choose today as a birthday? The 12th is the feast of the Most Holy Name of Mary and a very special day in our family's liturgical year. I even looked at my due date, the 15th (Our Lady of Sorrows) and the 23rd (St. Padre Pio). Never did I think to check the 2nd! In fact, I remember not even really considering the 5th as a possibility telling a friend that that would be "WAAAAY too early for me to have a baby!" It wasn't until we arrived home that I had a chance to look at the liturgical calendar and discovered that the 2nd is the feast day of the Martyrs of September, a group of French seminarians who were martyred during the French Revolution!

So if this little one someday jets off to study French at the Sorbonne, I will not be surprised.

P.S. Sorry to cut this short so abruptly but I've been told that the problem with being severely anemic and having had major abdominal surgery is that I can't even think about starting iron supplements for two weeks since they can have a negative effect on the digestion. So when my energy is gone, it's gone! It's taken me two days to put even this much together.

Email ThisBlogThis!Share to TwitterShare to FacebookShare to Pinterest
Labels: Babymoon