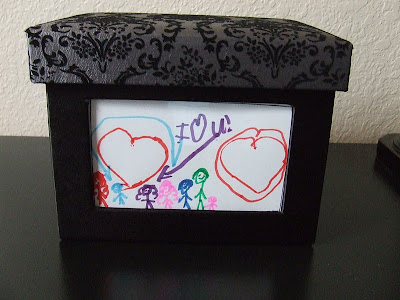 BigBoy drew Shortcake's name in the family Kris Kringle draw. She has been loving her new role as primary kitchen helper since Cupcake was born. She has made several batches of pumpkin bread, banana bread and even surprised her siblings with a batch of Daddy's famous chocolate chip cookies. BigBoy gave her a HUGE hug for that act of service!

So he and I came up with an idea to decorate a recipe box for her. I thought we'd be able to find just a plain wooden box for him to paint but we had no luck in our craft stores. Jewelry boxes, yes, but no recipe boxes. So we opted for this photo storage box on sale at Hobby Lobby. He drew a picture for her to decorate the front and chose some recipe cards with puppies on them. I printed off the pumpkin bread and cookie recipes for her and made some dividers from some cardstock we already had. I added a bag of chocolate chips from the pantry to let her know that he would appreciate if she would put her new gift to good use... soon! 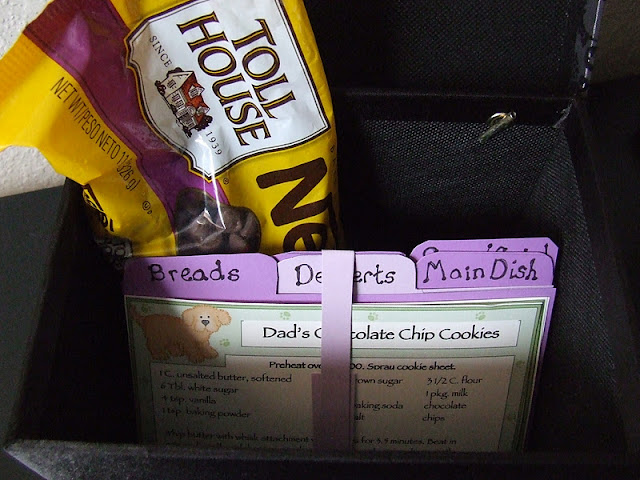 I won't be able to post the girls' gifts to their brothers because they are already wrapped and hidden away. Sunshine chose this map of middle earth poster

(it was less than $5 when we ordered it but it looks like it's gone up a little) for The Professor along with a pair of fingerless gloves that she knit for him. Shortcake found a Family Circus comic book for BigBoy. He loves The Family Circus and was sad when we told him that Bil Keane passed away last month. It's a used copy, since most are out of print, but my kids don't mind. A new book is a new book even if it's been owned before.