I have now finished all three of the Gaskell novels that were made into television movies (Wives & Daughters, Cranford, and North & South) and I've started another one of hers, My Lady Ludlow. In the adaptation of Cranford, My Lady Ludlow and a few other tales were mixed together to come up with the story presented as just "Cranford".

Here's the thing... I don't mind if you are going to add to a story taking from an author's collection of works, but when you make significant changes like... oh say, a minor character who dies in the beginning of the book doesn't actually die at all in the television show but in fact goes on to become a major character ... that's a pretty significant change! Can you still call it the same story? Should they have changed the title to something else, at least? Is it still Little Women if Beth doesn't die? (Sorry if that just ruined Little Women for anyone, but really, doesn't everyone know Beth dies?) 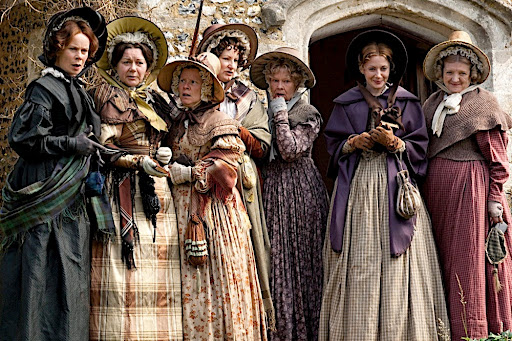 Or what about a supporting character in the book who doesn't die at all in the book who ends up dying in childbirth during the movie? Maybe that's not as bad. I don't know.

One thing I will say is that the humor in the book Cranford is so subtle but so hilarious. And the television adaptation definitely caught the flavor of the world of Cranford, even if it didn't get the plots right.

A friend asked if she should read or watch first. Here is my opinion: read Wives & Daughters then watch. Watch North & South, then read. Cranford? It doesn't really matter.

Email ThisBlogThis!Share to TwitterShare to FacebookShare to Pinterest
Labels: Books for Grown-ups