Doggie for a (Mother's) Day

My husband has insisted that along with all the praise I lavished on him this Mother's Day that I let you know the "truth" about what he also brought home. 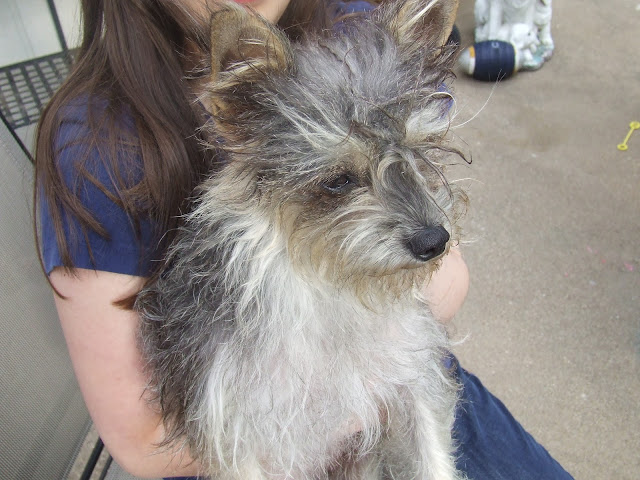 Actually, some neighbors found her wandering in their yard but they were on their way out for a couple of hours so they handed her off to us. He gave her a bath while I called to find out who had a microchip scanner. Husband and the girls took this little sweetie down to the people at the local emergency animal hospital who found a microchip and contacted the pet finder people while I made some flyers to post in our neighborhood. Based on the info they gave us we believed that her name was Opal and she had been owned by a man in our area but surrendered to an animal shelter sometime last year. Well, I chucked the flyers thinking there was no reason to put them up. Little did we know their info was wrong. People... if you have your dogs microchipped (which I think is a great idea, btw...) you might want to double check to make sure the information they have on file is correct. Otherwise, some kind but misinformed neighbor might accidentally keep your dog overnight, give it a bath and come this close to giving it a hair cut!

When we called the shelter in the morning, they called the owner, our neighbor down the street, who had not surrendered the dog but in fact, had rescued her from the shelter sometime last year. We walked her down to them yesterday and met them officially. I have a feeling we will be visiting them again soon since Cupcake has been asking for "Puppy Opal"... whose name turned out to be Suki.