Brief blog business... if you prefer to use FB as your feed reader in these post Google Reader days (wah-hah-hah!), I have created a page for this here little blog. I will be posting links to my posts and albums with links to coloring pages as a little reminder of what's available.
You can find me by clicking here.

The first thing we're reading this week is a delightful new e-magazine published by a couple of very talented young girls. All of my big kids read the first publication and can't wait for the second. Shortcake, my resident writer, especially loved it. It's called Tale and just a slight word of caution, they have no control over the other e-mags that are advertised by their host publisher below their magazine or on the side bar. Be careful if you go clicking around.
I thought that Josie's review of the second Percy Jackson movie (haven't seen it but read the book) was very well done...clever and funny. The article by C.M. Davidson on dystopian fiction made me consider looking into reading some good dystopian fiction to see if bad dystopian fiction had unfairly colored my perception of the whole genre. But it was her book review of Navigating Early by Clare Vanderpool, that saved me from getting trapped in another book series. Unfortunately, our library doesn't have Navigating Early so I decided on Vanderpool's other novel, Moon over Manifest (2011 Newbery Medal book), which turned out to be a great pick! 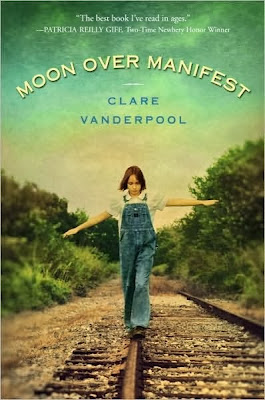 
Abilene Tucker feels abandoned. Her father has put her on a train, sending her off to live with an old friend for the summer while he works a railroad job. Armed only with a few possessions and her list of universals, Abilene jumps off the train in Manifest, Kansas, aiming to learn about the boy her father once was. Having heard stories about Manifest, Abilene is disappointed to find that it’s just a dried-up, worn-out old town. But her disappointment quickly turns to excitement when she discovers a hidden cigar box full of mementos, including some old letters that mention a spy known as the Rattler. These mysterious letters send Abilene and her new friends, Lettie and Ruthanne, on an honest-to-goodness spy hunt, even though they are warned to “Leave Well Enough Alone.”
~ from Amazon


This book is not an action packed adventure story so compared to what I had been reading it was noticeably slower paced, but not in a bad way. It was interesting and captivating but not in a "sit down in an evening a read the whole thing" kind of way. In fact, the whole story moved like the train that first brings Abilene to Manifest... slow and steadily building up speed as it pulls away and takes you on a ride. This is a book you want to savor! I really didn't want it to end.

The present day story draws you in and unfolds. Soon, it becomes entangled with a story from the past and both stories draw you in like a warm, comfy sofa and and a soft blanket on a cold rainy day as you read to find out how these two tales finally merge. You might have your suspicions, but you don't really know for sure so let them go and just enjoy the stories. It's a wonderfully rich piece of historical fiction giving you glimpses of a tiny immigrant town in Kansas during both The Great Depression and WWI. Abilene's journey searching for a connection to her father in this town he once called home is filled with intrigue and fascination. The newspaper clippings reveal life in a small town through the eyes of a plucky young wanna-be journalist. The letters written by the young doughboy, Ned, who is fighting in France to his friend back home shift slowly from humorous to heartbreaking.

What I didn't expect from this book were the tears. Real tears. Gentle tears. Healing tears. Were they happy tears, you ask? All I will say is that a book with two stories can have both a joyful and a sorrowful ending.


A couple of points for very sensitive or concerned readers. There is a character who is a "diviner" or fortune teller but only in the sense that she's an old Hungarian woman who the girls think of as a gypsy. Miss Sadie knows a lot about bugs, herbs and telling stories.  In fact, Abilene comments several times that "Miss Sadie was an awful purveyor of the future, but she sure knew how to spin a tale from the past." There is no actual divination or practicing the occult in the book.
Also, since Manifest is a town made up mostly of immigrants, there is also quite a lot of mention of different religions (including a Catholic nun school teacher) but the author is very respectful to all of the religions mentioned. I loved when they were looking for a big enough "trough" like container to use (I won't give away why)...

“But why can’t you do it at the Catholic church? Or the Methodist church?” Mrs. Larkin asked. Shady answered. “Their little fonts wouldn’t do much good. They’re just for sprinkling. It’s the Baptists who enjoy a good full-body dunking.”
Vanderpool, Clare (2010-10-12). Moon Over Manifest (p. 223). Random House Children's Books. Kindle Edition.

Because the story is told through the eyes of young Abilene, there are some rather humorous observations about the nun especially when the girls spy her without her veil on (she doubles as the town's midwife to assist at difficult deliveries) and the various religious people in town but like I said, nothing ever disrespectful. Age level recommendations: 10 and up only because it does deal with some heavy subjects like WWI, death, the Spanish Flu Epidemic, alcoholism, the KKK and The Great Depression. All of my big kids (oldest three) have read it and enjoyed it.