WWRW: A Sojourn of Sorts

Do not freak out! Wednesday was several days ago. Today is Saturday! I meant to post this on time but losing almost a whole week to ice means that I am suddenly behind on everything! 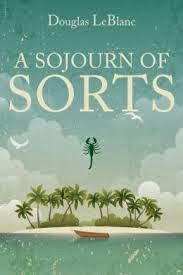 A Sojourn of Sorts by Douglas Leblanc {affiliate link}
(I received a free copy of this book in exchange for my honest review.)

This was a very interesting book written by new author Douglas Leblanc (who, by the way, tells me he was homeschooled himself for a while before college). It's a middle grade fantasy adventure which means I let The Professor read it. It received his stamp of approval before he passed it along to Shortcake, our fantasy adventure buff around here. So, the three of us are putting our heads together to give this review.

This book kind of surprised me. It started off with a unique situation… an isolated community living on a tropical island. Not the kind of situation I expected for a fantasy adventure but very intriguing. You meet a young man, named Geel, who daydreams about battling pirates and adventures exploring the other 26 islands in their world while the rest of the islanders are content to keep to themselves. Geel unexpectedly meets the wizard, Brackle, who is trying to make his way to another island to warn the King against moving a very powerful artifact. Geel, seeing his opportunity to get away and have a real adventure, leaves a note for his parents saying he needs to help a friend, promises to return and sails off with the Alchemist, Old Gawny, and his smart-aleck parrot Petey, to meet up with the wizard.

We all thought it was a well-written, fast-paced, easy to read story with some unique concepts and characters. Shortcake suspects that the author might have a fondness for Ancient Roman history because she felt like one of the civilizations they come across in their adventure was very Roman-esque. The Professor agrees they were similar to Romans but with a healthy injection of Germanic influences such as their idea of courage. (Yes, this conversation really just took place as I typed this.) Shortcake thought that was neat to see such a civilization included in a fantasy adventure story and The Professor agreed.

The main female characters in the book are vivacious and spunky which pleased my similarly vivacious, spunky girl. The villain of the story is your typical villain… the bad guy who gets what he deserves in the end. There were also a plethora of Z named characters which delighted us. If you don't know why, it's because you don't know my children's real names. :)

For sensitive readers: there was a village full of raggedy old hags and trolls who try to eat the children in the story. Part of their escape involves dropping some shriek beetles on a woman who is then bitten to death. Nothing gory, just a little disturbing maybe for some. There are also some other instances of characters having to kill in order to protect themselves or others including one case of a 12 year old boy stabbing another kid his own age who was possessed by the evil villain in order to protect his friend. Just FYI. Again, it's not gory or salacious, in fact, it's pretty typical for a fantasy adventure story but it might disturb some sensitive readers. Our age recommendation for this book would be 11-13.