Summer Shakespeare Chat :: Much Ado About Nothing

Most larger cities offer a summer Shakespeare program. Does yours have one? Are you planning to attend? If not, why not join us here while we watch some Shakespeare in the comfort of our home and discuss it in the combox. First up… Joss Whedon's Much Ado About Nothing. 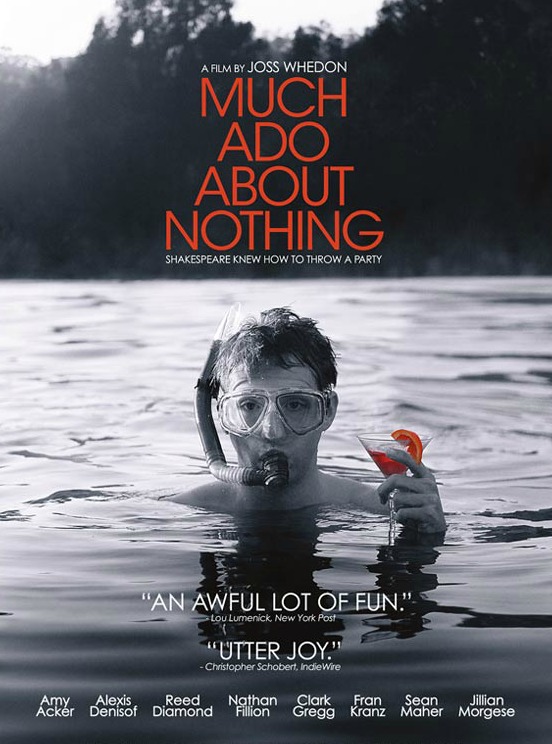 Yes… you read that right. The Man They Call "Joss" of Buffy, Angel, Firefly, Serenity, Dollhouse, Toy Story (did you know that?) and Dr. Horrible fame filmed a version of Much Ado About Nothing set in the present day but in black and white and mostly at his house! I must admit… I have a few quibbles with some of the choices he made but I always find Shakespeare in a different time and place fascinating. I'd love to talk to you about it! Let's have a summer Shakespeare chat. Right now, it's on Netflix streaming and Amazon Prime Instant Video. So, get thee to your Roku or computer or whatever, watch the show and then come back and tell us what you thought or write about it on your blog and then link to it in the combox. (Or maybe I can figure out how to do one of those linky things if you want to write a blog post too.)  I'm going to write up my thoughts and put them in the combox.

CAVEAT: This is not a version for younger children to see and I think teens even need to be cautioned. Whedon's interpretation of Beatrice's "I know you of old" line means "in the Biblical sense" and then there is always the wooing Margaret scene that goes about the same way as the Branagh version. If you want more specific info, you can email me.

UPDATED TO ADD: Haley mentioned something over on Cari's blog that made me think I needed to add another sort of caveat… if you Luh-uh-uhved the Branagh version and you aren't into experimental theater, you probably aren't going to like this version. It's not the emotionally full version that Branagh's is. Haley said that it felt like a bad student film. Now, I wouldn't go that far, but it definitely had an experimental vibe to it, not a polished one. If that bothers you, then I'm sorry. Like I've said before… ever since I saw an adaptation of The Merry Wives of Windsor set in the Roaring 20's and Sir Ian McKellen's Richard III, I've been fascinated with Shakespeare set in a different time and place. I don't mind experimental. I'm more than willing to suspend my disbelief just to see how they pull it off.