After my review of Leila and David's book, I started talking to Sean about our family's prayer life, our space, our habits. We talked about the fact that most nights, when we gather for prayers before bed, we all flop in the room most would call the "den" of our house but we call the "playroom". That very fact really kind of boggled my mind when I stopped to examine it. It's a great example of what crazy creatures of habit we are! The playroom is the room that has the least amount of seating (one couch w/ a moveable ottoman and one chair) and is usually (thanks to the resident toddler) in the greatest state of chaos at the end of the day.  But since it was the room that used to be the most comfortable when my oldest children were smaller, it became our habit.

So naturally, first, because I'm a glutton for punishment, I tried to find a way to create a little oratory space there. One corner that isn't much used could house some corner shelves. The fireplace with mantle could also be redecorated. Believe me, after seeing Auntie Leila's lovely pictures, I was tempted. I even found myself thinking… I have that same Madonna and Child! But we've tried the liturgical mantle thing before and it just didn't work for us.  I've been much happier with a decoration scheme that doesn't change much. I was feeling like I was trying to force it and I know myself well enough to know that if I have to force something, it's just not going to last long term.

So, I turned my eye back to the dry bar space that I mentioned before seeing all of it's difficulties and still not being content but trying to be open to inspiration. Through the completely purposeless doors to the right that for some reason divide the dry bar area from the rest of the living/dining/school room, I caught the sight of this… 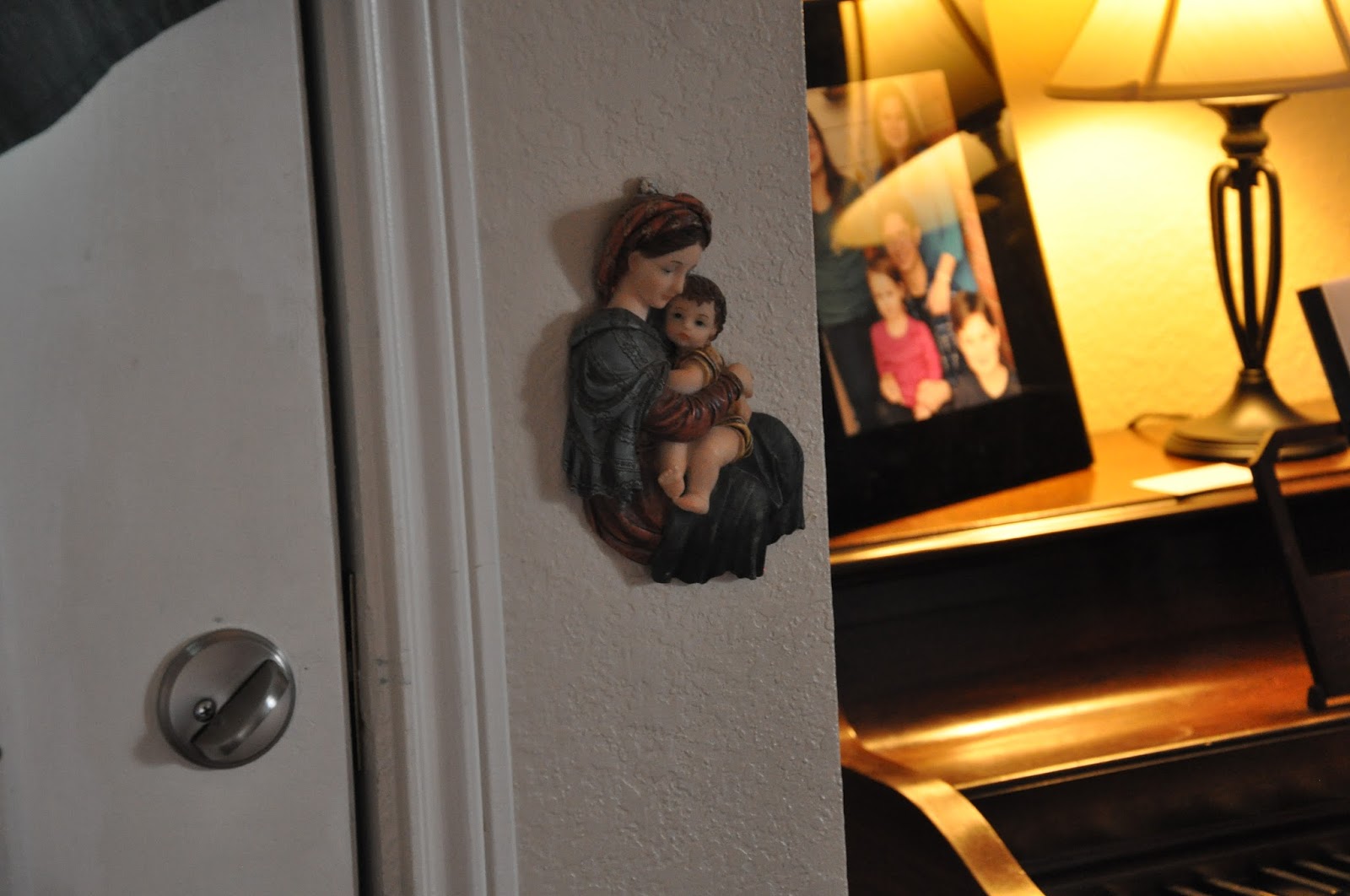 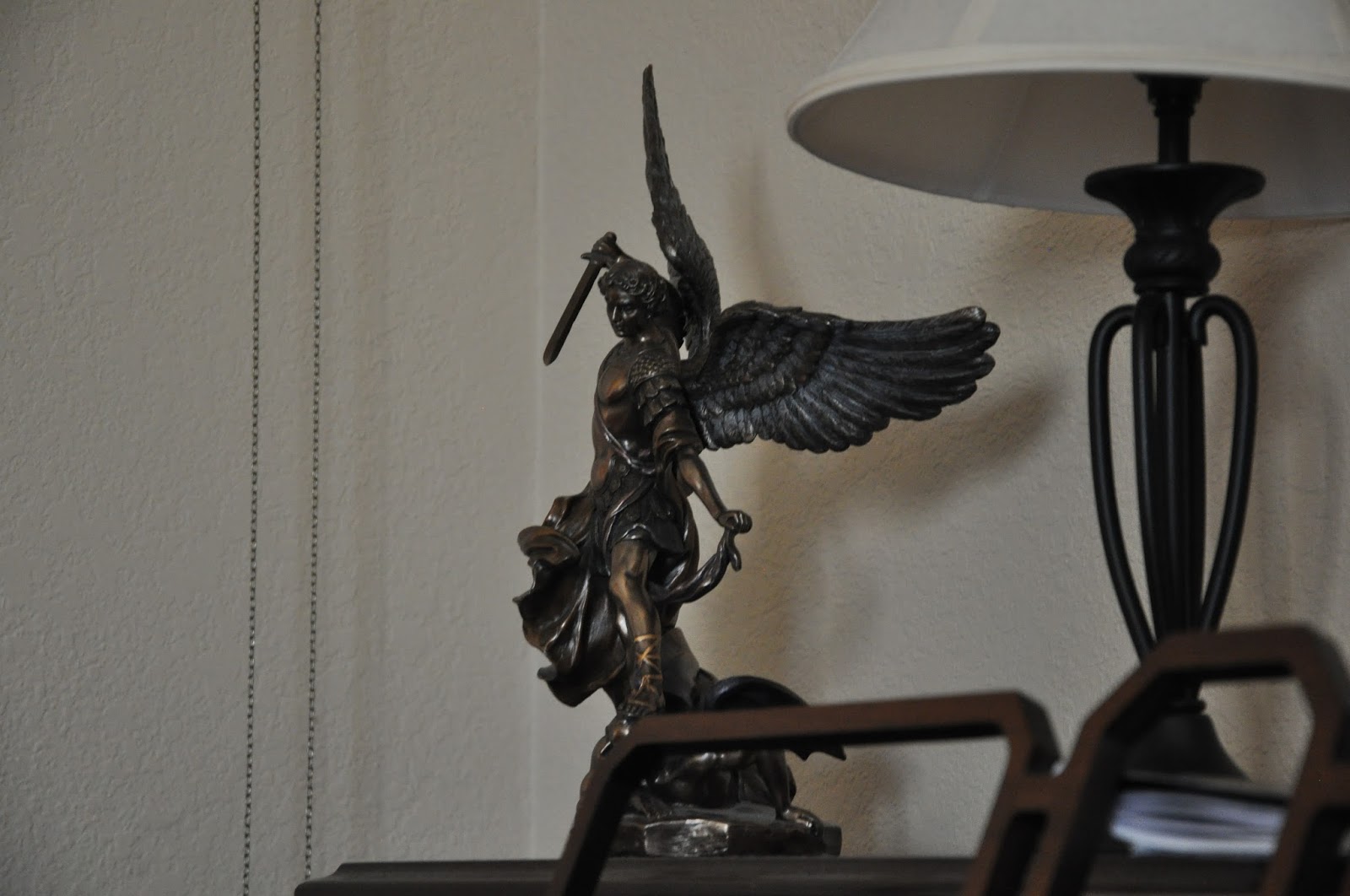 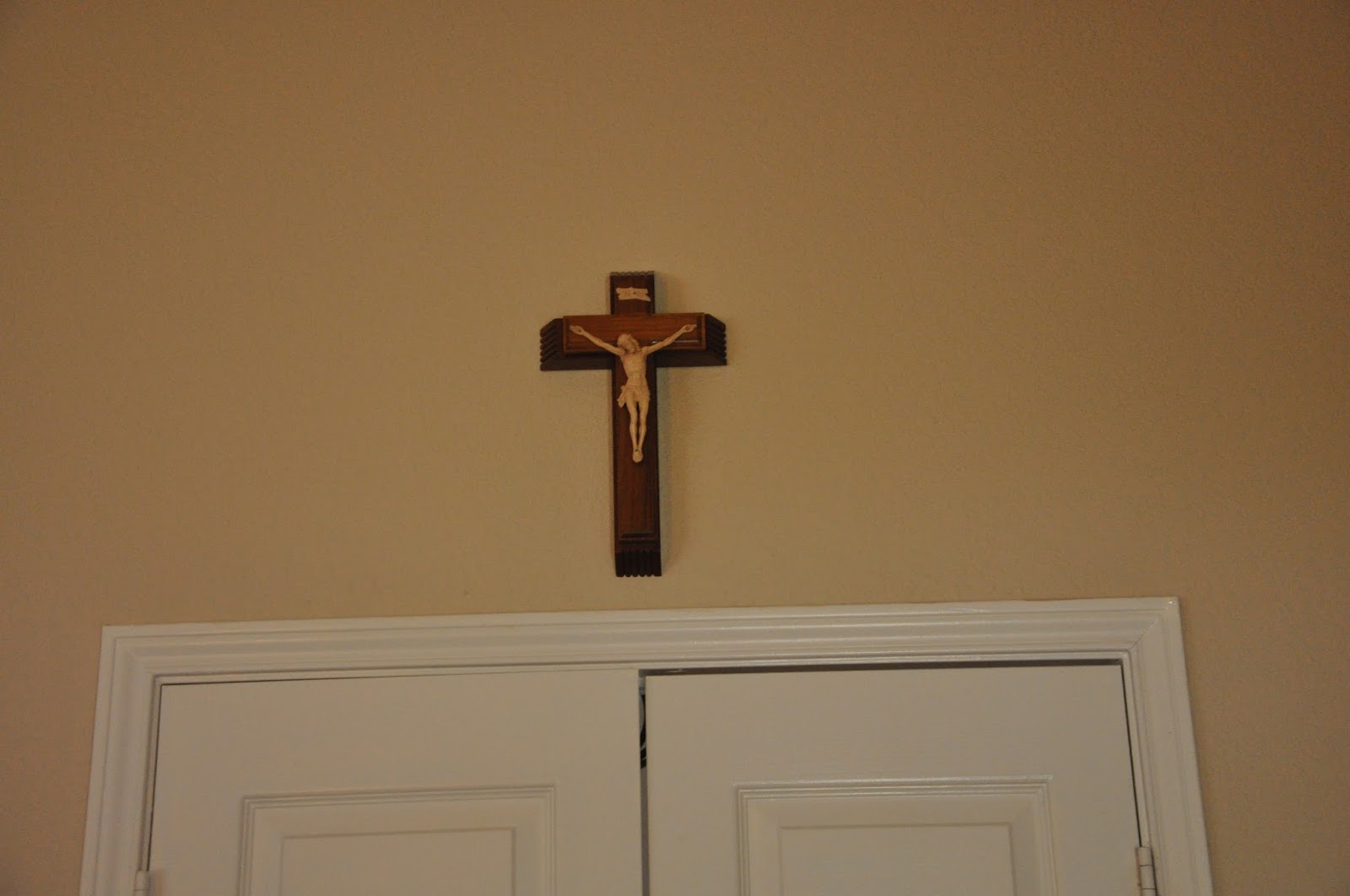 and as I started to turn more, this… 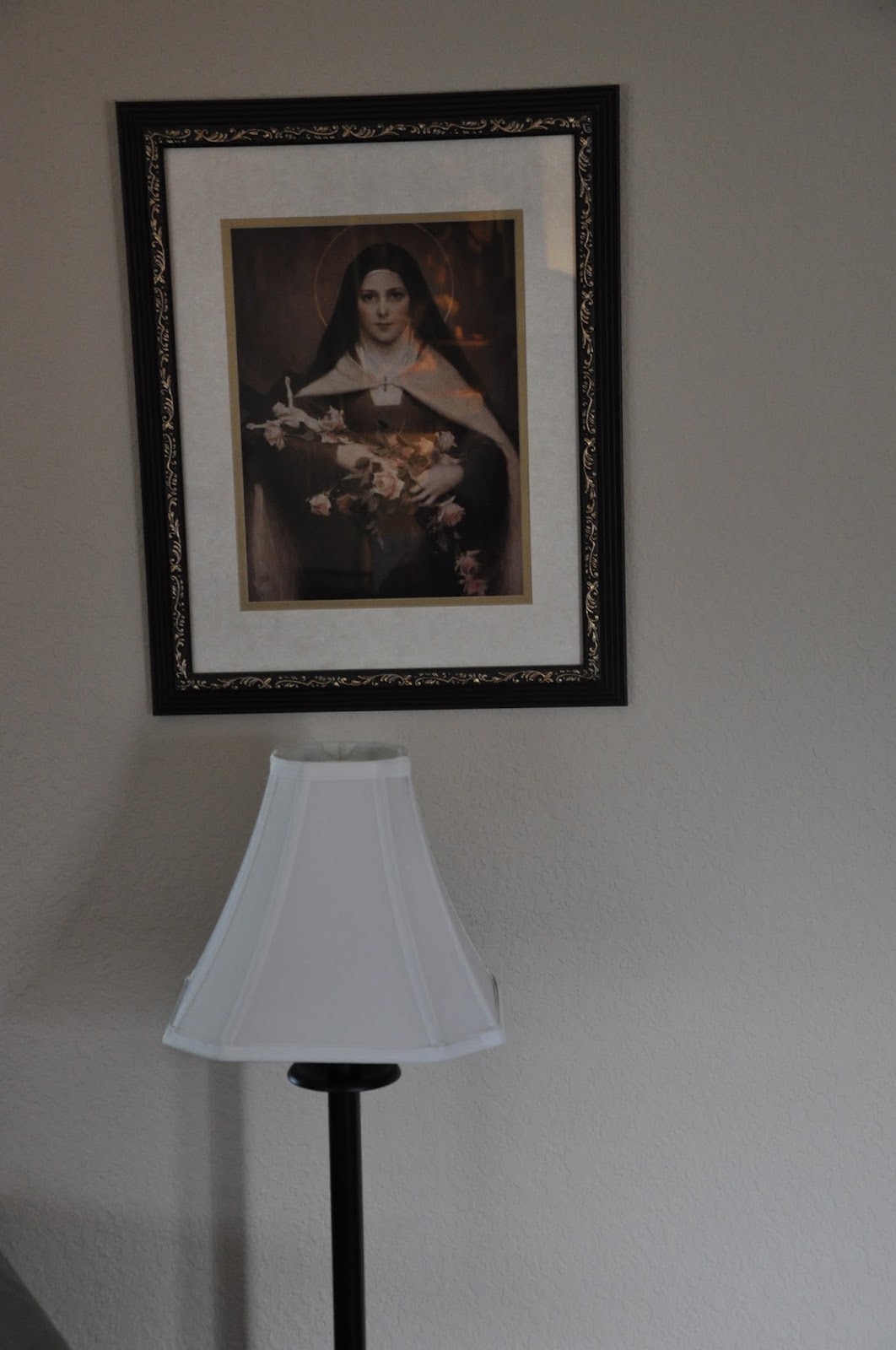 Suddenly,  I started seeing everything in this room that already made it a little oratory.

I also noted how much more seating was in this part of the house; a full couch, a loveseat, a recliner, a padded storage bench and a full dining table with 8 chairs. And I started wondering… WHY DON"T WE DO OUR PRAYERS IN HERE? Seriously! It was such a simple, lightbulb moment for me. I'm kind of a little embarrassed to admit it here, but... hello humility!

This part of our house was already set up (almost) perfectly for the purposes of a little oratory. There are so many beautiful pieces of art to help focus the mind and heart… things that we already love or else we wouldn't have them hanging around. They have been there all along but sometimes the eye just glazes over them. So, we talked to the children and have been working on bringing those things to the forefront of our mind's eye instead leaving them jumbled up in the background. We also talked with them about the Liturgy of the Hours. It's something that I think Sean and I have decided to explore ourselves before we bring it to them. They each have some prayers that are special to them that they would like to commit to memory. We've got all of the basics down, of course, but now it's time to commit to memory those words that speak to their hearts. 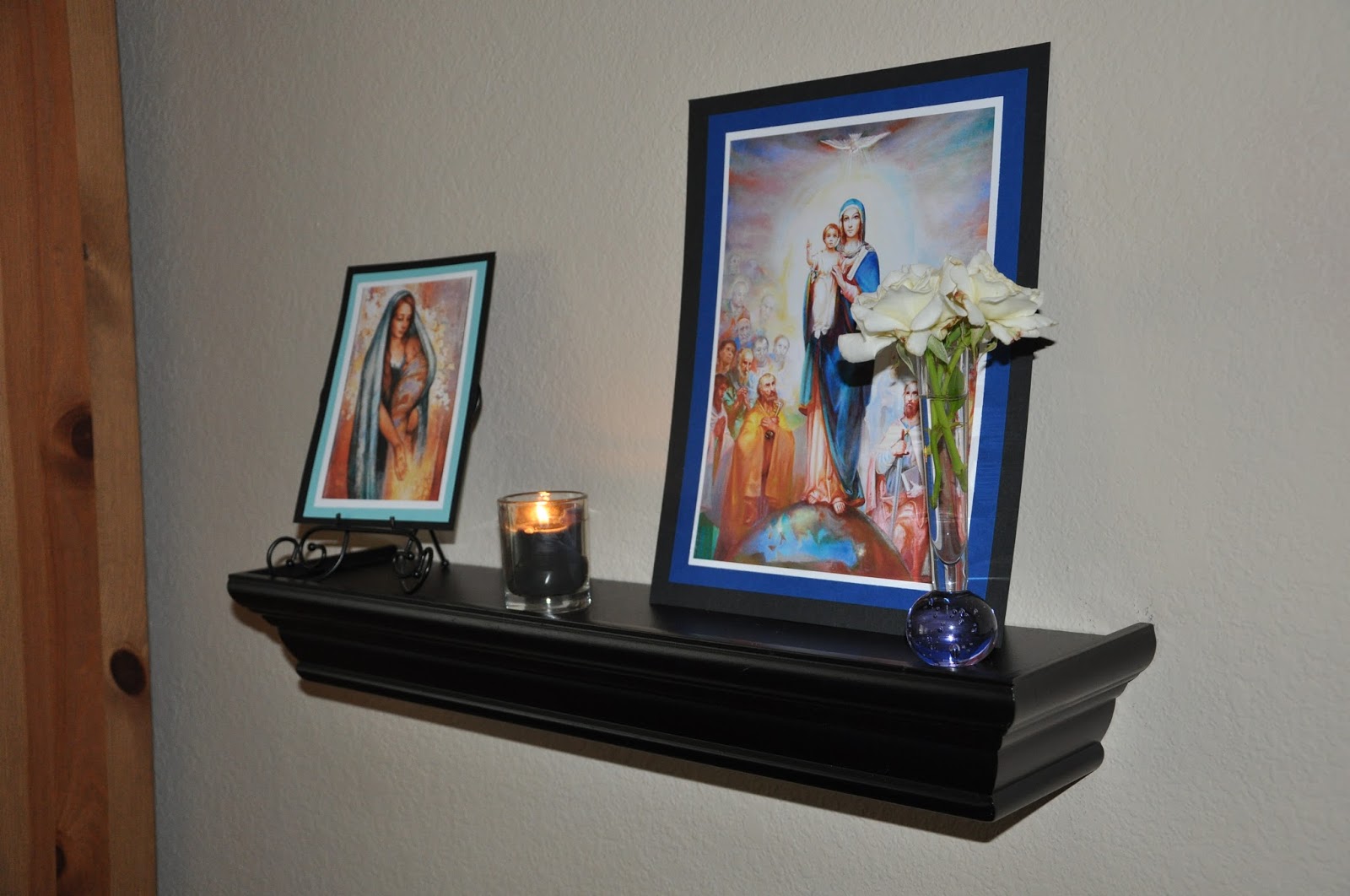 So, my one little change to the room was to remove the chalkboard that had been on this wall and move it to a lower level for Cupcake to use. I added this lightweight, decorative shelf that has enough room for a small little vase, a candle and some pictures that I printed out and glued onto card stock. There is a crucifix waiting to be hung above it as well and I'd like to find some candle wall sconces but those can wait for right now. Maybe some day we will add more permanent pictures or icons to the wall. I don't want it to feel too cluttered. My intention is to use these unframed, card stock pictures as a little bit of art appreciation tied into liturgical celebrations. I've already got some ready to go for the Feast of the Assumption and had some (that we've already put away) for Pentecost. I thought about adding in saints too, but I don't want to overburden myself with changing them out. So, major feasts and celebrations only for right now or anything that I think is beautiful that I want to share with the kids.

For all my fellow visual people out there… Link up with Leila or just take a peek into other people's homes here! (You can't do that IRL without being arrested but anything goes here on the WWW!)