Today was the Feast of the Chair of St. Peter. We pulled out our Pope poster and perused it pointing out some of the more interesting Pontiffs.

Did you know there was a Pope Valentine?

The Professor was pretty sure that Pope Lando was of no relation to Lando Calrissian.

Our poster is not one of the new, updated versions so we made our own addition. 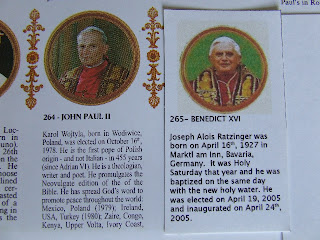 Here he is next his predecessor.
We reminisced about remembering when Pope Benedict's election was announced. Husband just happened to have come home from work to get something he had left behind. We had been checking the news periodically, but didn't have it on all the time. My father called to say that the smoke was white. We turned the television on and all sat down to watch. The Professor passed out some Spiderman noise makers left over from a birthday and told everyone to blow them when the new Pope came out. We were all together when the announcement was made and true fanfare ensued. The children decorated posters saying "Habemus Papam" and Husband brought home a bottle of German wine (yeah...I know, it should have been beer, but Husband is allergic to the stuff and I haven't found any I like outside of Germany).

Please say a prayer for our beloved Pope Benedict today. He has a lot of hard work ahead of him but I truly believe that he was the best man to fill those enormous shoes!