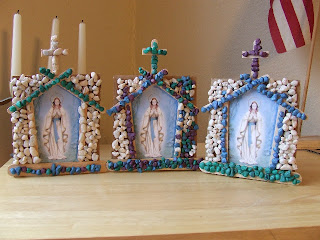 Some of the rocks started to fall when we set them upright. I think they were ones that weren't very well set in the glue anyway. A little dab of Tacky Glue and they were stuck tight. We did end up using the Tacky Glue for the outlined pieces and the Elmer's for filling in. Both did a good job, but the Elmer's took all night to dry. Note to self: stock up on Tacky Glue!

We had a wonderful homily last night about St. Bernadette, Our Lady of Lourdes and also St. Scholastica. He enjoyed chuckling at her response to St. Benedict's rebuke when the storm kicked up. He said, "How like a sister! How like a BROTHER!"

He also created an amazing mental image of St. Bernadette's visions. St. Bernadette never called Mary by her name but always called her "the beautiful lady". She asked Our Lady her name every time she came to the grotto. When Our Lady finally gave her message, Father asked us to imagine this poor, uneducated girl running through town repeating over and over the message (as it was an unfamiliar phrase) until she came to the priest and burst out "I am the Immaculate Conception".

After Mass, we got a chance to visit with Father and he asked us if we noticed that Our Lady appears to girls more than boys. He, of course, knew why! St. Bernadette remembered everything about "the beautiful lady", described the visions even down to the PALE yellow roses on her feet. St. Juan Diego....well, she had to leave him a picture!