Rachel over at Testosterhome was looking for advice on what to do with all those holy cards Catholic families seem to amass. I mentioned one of the things we do with ours and was surprised at how many people liked the idea. We call them Holy Rings. The children each have their own (except for BigBoy.. we can't find his right now). Some of the cards are the same for each child and others are different. Some of the cards are of saints to whom they have a particular devotion. Some are their name saints. The Professor has been a dedicated knight of St. Michael since he was 2 when he would point to any picture of the Archangel saying, "St. Michael whack the Debul!" Shortcake still likes to pull one out of the diaper bag and look at it when Father has a particularly long homily. Anyway, I thought I would share a picture of the three we can find: 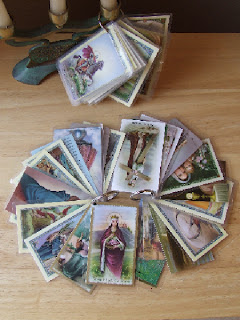 I started them with a few (5) cards each, but we have added to them over the years. St. Nicholas is usually good for one every year and the Easter Angles are always leaving a few in the Easter baskets. I do let my babies play with them and shake them around, but only under careful supervision (usually on my lap during Mass). If they start chewing on them , I get a little nervous that the sides of the cards might cut their little gums. They are all laminated and I use a single hole punch to make the hole. Large sized key rings can be found at any craft store and even come in various colors if you wanted to color code them.