We saw bluebonnets Sunday! On the sides of the highway and at church (which explains why I don't have a picture, gotta get a camera bag!). But I do have these lovely ones made by my children. 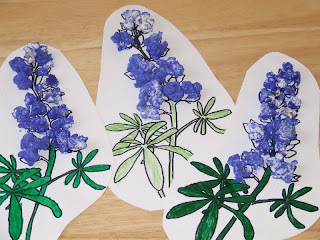 Here is a link if you want to try it yourself. If you go looking for dried tempera paint and everyone who works at the gigantic craft superstore tells you they don't carry it and when they don't carry something it means it doesn't exist...don't listen to them! You should know that it is also called poster paint and I highly recommend the "dust free" version. We talked about why this strange looking flower has so many names and what they are. From one website I found while researching:

The Texas Bluebonnet is the state flower of Texas. It is part of the lupine family.The Bluebonnet became the state flower on March 7, 1901. It is called such because it bears a resemblance to a woman's sunbonnet. This flower can be seen all over the state of Texas in the spring, usually around March-May. This flower is also known as buffalo clover, wolf flower, and "el conejo" (Spanish for jackrabbit).

Bluebonnets are a form of the lupine flower coming from the Latin word lupus, meaning wolf. They are called "wolf flower" because it was once believed they "devoured" the soil of nutrients, because they are found growing where nothing else can grow. It is now known otherwise that bluebonnets in fact add to the nutrients of the soil.

You can find out more here.

We read The Legend of the Bluebonnet and talked about the sacrifice the little girl made. ( A little foreshadowing to the clean out I have scheduled later on in the week.) 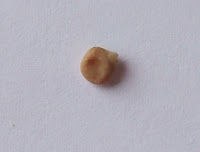 Sunshine drew a picture of a bluebonnet seed (pictured above) and we put that in our nature notebook along with an acrostics poem the children composed.

Buffalo clover
love
Lupine
pretty
blue
wolf flower
four winds
green leaves
Sacrifice
gift
feathers
The Professor wants to make a Lone Star flag later on today. We are hoping to go back out once the rain is gone to try and snap pictures of the bluebonnets we saw. Since the weather is supposed to stay soggy for a while, it might not be until next Sunday. Here are some to tide us over.

I am not pouting... the farmers need the rain!