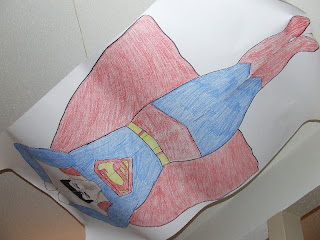 Superman came flying in (suspended from the ceiling) to attend BigBoy's celebration. 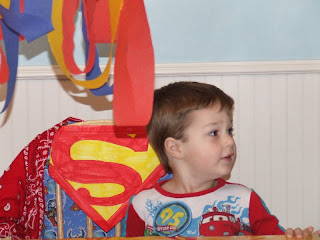 The birthday boy's chair of honor!
BigBoy is a super kid who loves super heroes. We have let the children see some of the old 1940's cartoons and thanks to online video rental they have also enjoyed some of the 1950's television show which prompted many interesting discussions like what are those things that you type on like computers but without screens. They haven't seen any of the more modern superhero movies but their fascination with superheroes needs little more than their own imagination to grow.

What is it about kids and super heroes? Even before The Professor had been introduced to any of the usual characters he had created alter egos for himself and his brother and a whole world to go with them. My SIL and her husband had their children convinced for a time that they were superheroes who went on nightly adventures while the girls slept safely in their beds.

Bigboy's other love is the zoo, so of course, we had to make a visit in the morning. We didn't stay very long as we soon grew tired of getting drizzled on. We found shelter during the heavier downpours in the Texas Wild Weather show (ironic, don'cha think?) and finally got to see the burrowing owl that had eluded us every other time we went. (I was seriously starting to think this was some kind of cruel joke. Was there a camera installed behind the sign that read "Can you find the burrowing owl?" just to catch the silly people press their noses to the glass and look. Can you see him Fred? Nope. Can't see him Marge. Of course not...he's BURROWING! (insert maniacal laughter here).

One of his gifts was his own little zoo. This safari play set by Animal Planet was perfect. I had looked at the Fisher Price Learning Zoo and determined that the animals were too cartoonish for my tastes (and the price was too much for my pocketbook). Some Scleich figures that were more realistically colored had ferocious features that I knew BigBoy wouldn't like. The Animal Planet set was the perfect compromise. The animals all looked true to life (in some cases too true...just ask my mom about the snake!) but have "happy faces" that won't frighten sensitive little guys like my BigBoy. He is terrified of the gorillas at the zoo but had his gorilla drive the jeep all over the play room with nothing but smiles! 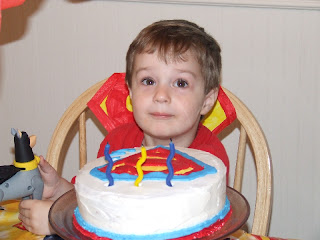 We returned home in time for a nap for the birthday boy, time to whip up his favorite turkey burgers for dinner and of course, a chocolate cake with a Superman shield on it for dessert. A super day for a super kid!