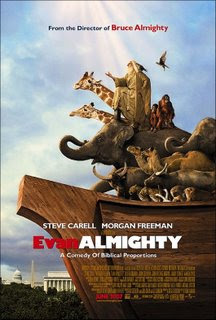 ... we couldn't stop laughing. Wow! When Margaret recommends a movie... you better run, don't walk to the theater especially if it is your birthday and you want to have fun with the family. (Yes, today is my birthday. No, Red, I wasn't hiding it. Yes, Margaret, I am 23 (+10) and I love sharing it with St. John the Baptist but, no, we won't be having grasshopper pie for dessert.)

This is a great movie! This is a family movie. This is a... dare I say it? Yes, I will... a Catholic movie although I am not sure they did it on purpose.

There were paraphrases of St. Teresa of Avila (God, love me a little less!) and Mother Teresa of Calcutta (You know how to make Him laugh, right?) scattered here and there. The kids laughed and cried (more about that later) and did a little dancing at the end. They all agreed that they enjoyed it even though some scenes were a little intense for them (again... later).

Now, I agree with Margaret... I can't stand crude humor. I don't like Jim Carrey unless it's the Truman Show or Will Farrell except for Stranger Than Fiction. We haven't seen any of the Shreks or Ace Venturas and a Sandler/Schneider team will make me nauseous just thinking about it. I do not stand in judgment of anyone who has seen these movies. They just aren't my cup of tea.

The only scatological humor in this movie came from the animals doing what animals do. Lots of bird doo and some dog doo. The word "feces" is used by a reporter because it rhymes with species and... just to be totally up front... so is the biological term for a part of the male anatomy, but only in reference to a specific kind of duck. (One of the sons is really into Animal Planet.) Oh, and one hyphenated reference to a donkey.

All of these terms sailed over my kids' heads. The messages that didn't though... were about family togetherness, trusting God, the importance of prayer, asking God for help when things get tough, and cooperating with the Divine Plan even if the rest of the world thinks you're crazy.

My only real caution is about the previews. Go when it isn't crowded and have someone save your seats so that you can sneak the kids in right before the movie starts. I had some issues with the first two movies that were previewed (especially the first one... Robin Williams in clerics should have been a clue!). You can see most of them here, here, here and here to decide for yourself.

So now, that it is "later" I will tell you about the other areas that my children were more sensitive to but these areas might be specific to our family and my kiddos.

* * * * * * * * * SPOILER ALERT * * * * * * * * * *
In one scene, the mother (Lauren Graham) takes the 3 sons to her mother's house because she believes that her husband is having mid-life crisis of biblical proportions. At no time is the word divorce talked about and they do eventually return to support him and help his efforts to finish the ark. My daughters were sobbing during the departure scene, but that might be because the concept of divorce/annulment is very real to them. My parents are divorced, annulled and both remarried in the church. They have contact with these grandparents and understand the situation but they also know how painful it was for mommy. Plus, I think children just have a natural sense that families should be indissoluble. We had a good discussion in the car afterwards about how God would never ask us to do something that would break apart our family and that the mom learned to have more faith and trust in God's plan.

The ending is also thematically dramatic (and very loud!!!) which was disturbing to BigBoy. Shortcake was very concerned that the Daddy would never recover from his total Noah makeover and both girls were frightened that the people wouldn't get on the ark in time to escape the flood. But...as I have said before... my kids are very sensitive to perilous situations. Having now seen the movie, they would have no problem watching it over and over again... in fact, as we were walking to the car, BigBoy was pulling Husband's hand saying, "Want to see it again?"