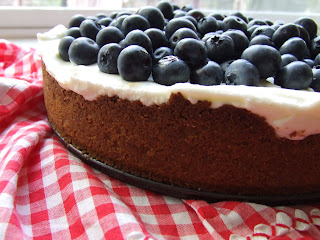 Well, here it is or... was. Husband thought it turned out great, but that is the kind of sweet, wonderful man he is. (He also says thank you for all of the kind birthday wishes!) I thought it was OK, but have since tweaked the recipe to make it better. I think...

So aside from smoke alarms and children running for the cover of their bedrooms with towels covering their mouths and noses, the crust turned out fine! We just told Husband that the theme for his birthday was Smokey Joe's Jazz Cafe and moved right along with the celebration.

I used real whipping cream instead of non-dairy whipped topping to make it a little more firm but it had the added effect of making it very rich. I think next time, I will try the Cool Whip and see how that turns out.

The best part... the fresh blueberries! Of course... why mess with God's perfection? They were so juicy and yummy and the little bit of cheesecake-like creaminess that surrounded them was great.

As expected... the kids loved the brownies.

Beat the cream cheese and sugar with electric mixer until fluffy. Blend in lemon zest. Fold in whipped cream. Spread into baked (not smoked) crust and top with blueberries. Chill until ready to serve.