I strive for honesty here in my ballroom, so I warn you this is going to be a nitty-gritty, beads-glued-under-your-fingernails type of post. Well, maybe not.

Wait, let me try that again. (Once more with feeling...)

So the Book Club went well, I think. I was a wreck... wound up, nervous, so silly! Everyone seemed to enjoy the stories and the crafts. The older kids behaved like typical middle school aged kids when it came to a strange teacher person asking them questions about a book they had read maybe once before. (Why didn't I bring those dental pliers?)

My favorite question they responded to was "which character did you identify with and why". The most honest answer was the 10 year old boy who admitted to getting angry a lot just like Gregory and the cutest answer was the 11 year old girl who (while sitting next to her 12 yr. old sister) said she identified with the younger sister Janet who was often forced to do things she didn't want to do. Don't worry. I assured the older sister that I understood the pressures of being the oldest myself. (Sometimes we just really do know better!)

Seriously though, they had some very interesting things to say and I hope I inspired them to take another look at the books they read for fun. I wanted to introduce them to the idea that an author has a theme and that theme is like a secret message they have to figure out. The Professor said he enjoyed it, but he's my kid, you know... not sure if I can trust him since he also witnessed my meltdown 40 minutes prior! :)

The children were intrigued by all of the pictures (thank you again!) of Kitchen Madonnas as they all said they had never seen one before. They went on to share descriptions of things they have in their homes (just maybe not the kitchen) to help them turn their hearts and minds to Heaven amidst the pencils and Legos.

Regarding the craft...
I am a fairly crafty person but it has been about 11 years since I have had to instruct a group of children more numerous than my own in how to do one. There were a few things I could have done better.

I had precut the foam board and opted for the self adhesive variety because I thought it would save on time. Unfortunately, it took twice as long to peel the paper covering off than if we had just spread the glue onto the 8x10 chunk! I had also pre-cut the faces and hands of the Madonna and Child in order to save time, but didn't think to provide more than two templates for the clothing. In reality... I should have had 1 set for every two children.

Things felt a little rushed, but everyone did manage to finish decorating theirs by the time we started cleaning up except for The Professor (yeah, I know... the shoemaker's son!). He was a great sport about it and understood that he would have the opportunity to finish at home with all of the supplies unlike the other kids.

So that is what we did yesterday to celebrate the Queenship of Mary. I had enough pieces for the girls to make and decorate a Madonna and Child and decorate they did! 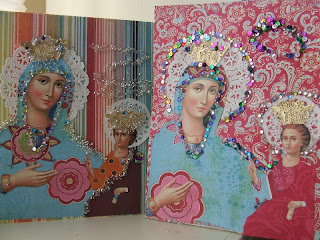 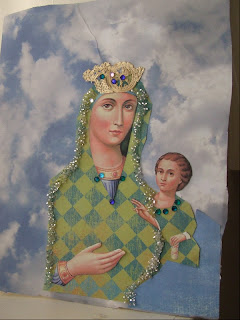 The Professor also had the opportunity to finish his and for some reason, I am just now noticing that his looks a little Picasso inspired. Either he is a typical 9 year old boy or we need to head back to the opthamologist.

We had a pudding pie for dessert and said our nightly decade. It was a fun, simple day but one filled with joy which has been hard for me lately but that is another post for another day as this one has already grown way out of control.
Bye!