If you have a Blue Knight at home then you might have heard of this month's craft project... The Arrow of God.

When we first moved into this house, The Professor was very interested in archery and, as luck would have it, there was an archery practice range just down the road. Unfortunately, they didn't offer lessons to anyone younger than 8 and by the time he turned 8, the place had closed. I think it is a gym now. Anyway, that first year we were here, he asked for a bow and arrow and received an excellent one for Christmas. St. Nick brought that one, but I found some just like it on Ebay. They were homemade, sponge-tipped arrows with a PVC pipe bow. Very nice and well made!

Since we signed up to be in charge of this month's craft, The Professor's set became the inspiration for the arrows we wanted our young knights to put in their quivers. Here is how we made them. 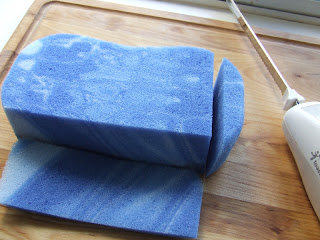 I tried to find rectangular sponges, but ended up with these curvy ones from the automotive care aisle. (The ones from the kitchen aisle smelled horrible!) Not being perfectly rectangular was no big deal; I took care of that with my handy dandy electric knife. If you didn't know that an electric knife is the absolute best way to cut sponge or foam, well... now you do! 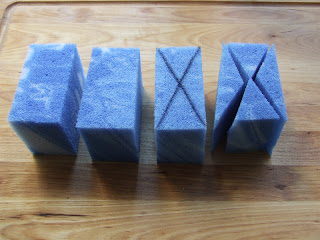 Once I had it into a large block, I cut it into four equal pieces. Each piece was then cut in an X shape. I drew cut lines on the third piece just for an example and then the fourth piece up above is what you have after the slicing. Remove the side pieces and save for future art projects. 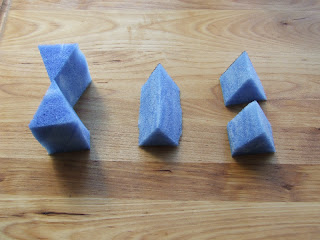 What you have left are the two hourglass pieces in the middle. Lay them flat so they make mountains and cut in half. Each sponge made 16 arrowheads. Using the points of my sharp pointy scissors, I cut an X shape into the bottom of one side, squeezed a large drop of glue into the hole and inserted the dowel. We used 18" x 5/16" oak dowels hoping that they would be sturdy enough to avoid snapping before the bows get made in March. We also cut notches into the bottom of the dowels and sanded down the ends in anticipation of their first flight. 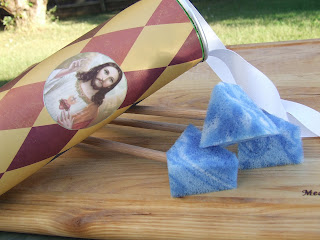 Now the arrows are completely finished so what will the boys be doing? They will be making quivers out of Pringles cans, paper, ribbon and stickers. That is my mock up you see above (which BigBoy will probably confiscate). We made our own stickers but I am sure you could find some lovely ones at a local Catholic store. The paper was cut to fit a standard sized Pringles can and secured with glue and tape while ribbon gets stapled into the inside of the can. The boys will also be choosing a color code to draw on their arrows with marker. We plan to have them decorate their bows with the same color code so that they will always be able to match their arrows to their bows. (Also trying to help out those mamas who have more than one boy!) I know it sounds super easy, but this group is mostly littles who don't really have a lot of patience for crafting. There are also quite a few Dad's who have more patience than the boys but will assisting more than one young squire. I hope they find this easy enough to do and fun, too!