I have yet to make the pencil version of those crayon pouches I made a while ago, but I did whip up a couple of these the other day. You see, we are using Math-U-See this year (love it!) and Shortcake has to do a lot of coloring to match the color of the blocks. So we scoured our colored pencil box to find just the right shade for each block (9's were a doozy). I promised Shortcake that I would make a little holder for her math pencils so they wouldn't get swallowed up by the big, giant pencil box again. and of course, Sunshine wanted one just for fun. All those times people would ask me if they were twins when they were toddlers... I should have just said YES! 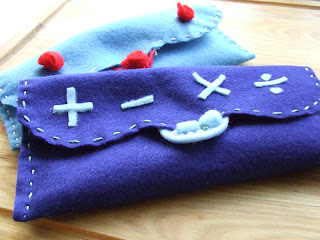 I made my own toggles, out of rolled up pieces of felt. Sunshine's were turned on their sides to look like roses and her clasp is a crocheted chain (about 10 stitches). The math symbols on Shortcake's were glued on and the clasp was made with a folded and stitched piece of felt. These were hand sewn only because I wanted the stitching to be an accent (and my sewing machine is buried under a mountain of "to-be-mendeds" right now). They took about 30 minutes to make and Sunshine probably could have sewn her own, but it was late. I might let her make one today just for fun since it looks like we are going to be stuck in the house watching the rain come down! Hope you are having an un-dreary Monday!

Email ThisBlogThis!Share to TwitterShare to FacebookShare to Pinterest
Labels: My Gals, Sewing