Actually, this was our October book but illness has really taken its toll on the group and we just now got around to getting together although we were still missing 2 out of the 5 regular families! We have decided to split up the group into older children and younger children. The 9 and ups met at our house last week to discuss By The Great Horn Spoon. Some of the tweens had already read it in their history studies so it helped that we had some other areas of study for them to explore.

This book discussion focused less on plot and theme and more on the genre of historical fiction. I wanted to show the kids how a great piece of historical fiction could introduce them to people, places and things from long, long ago, and help them to experience some of those things today. 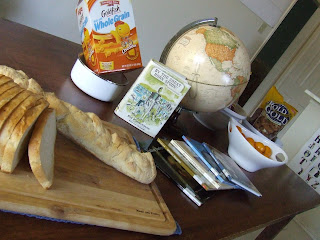 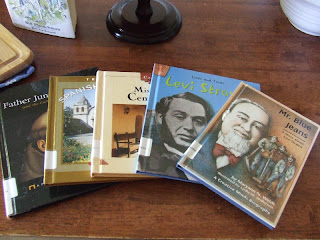 I set out some library books about Levi Strauss and the the California Missions and we talked about the history of blue jeans, how to make sourdough bread with a look and a sniff of real starter (courtesy of one of the other moms), the role sourdough played in the gold rush and some discussion about various gold panning methods. 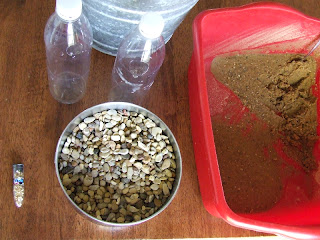 Which led us to our experiments. With the help of the 4Real ladies, especially Miss Theresa (who I imagine as a spunky combination of Martha Stewart and Bill Nye) we made a stream in a bottle. The kids added rocks, sand and a gold pellet to an empty water bottle and filled it with water. It was a fun experiment in sedimentation and even the oldest kids enjoyed hunting for the gold. 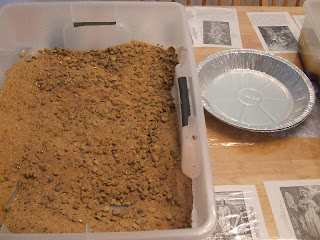 The next hands on activity was panning for gold. Husband and I created stream beds in a couple of old storage boxes. We used garden pebbles and sand with more gold pellets mixed in. Everybody got to try their hand at using a pie plate to pan for gold. When they discovered how hard it was, most of them abandoned the pans and just used their hands. They even had a contest to see which box could produce the most gold. The box on the left seemed to be the richest claim.

This was a great book for our crowd. It appealed to everyone. A little bit of adventure for the boys and some innocent romance for the girls. We finished up early and let the kids play tag outside in the sunshine.

My only concern now... what to do with two dry stream beds in my dining room? I hear they are worth their weight in fun!