You may not know this about me, but I am actually very shy about sharing things. Whenever I make what I think is a good find or come up with a good idea, I always assume that I am the last to the party and so often I won't say anything because I think that everyone already knows. Well, all of this is to say that I was trying to find a clever way to help The Professor remember and understand the difference between area and perimeter and really was surprised that I couldn't find anything out there on the world wide web that might appeal to him. We have all of the Sir Cumference books and the one about area and perimeter is a nice introduction, but really didn't cement the concept for him. Inspired by Mr. Demme and his excellent math program, I looked for a mnemonic device, a poem, even a song (something along the lines of Mr. Demme's handy guide to teaching the Greek alphabet) that would help him but came up with nothing so... I started work on one of my own. I am sure there is one more clever out there and if you know of it, please send it my way. For now, here is what we are using and I am sharing it, like it or not: 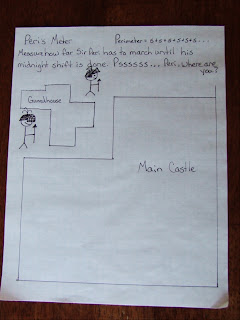 Peri's Meter (or Measure from the Greek metron)
Peri is a lowly foot soldier whose job is to guard the castle walls from attack. He is working the graveyard shift so it is pitch black, not even a torch to light his way; any kind of light would let the enemies know where he was so they could attack from the opposite side. His shift is over only when he has gone all the way around the castle. The only way he can know if he has gone all the way around is by counting his steps and adding them up. "Pssssssss! Peri, where are you?" his replacement calls. Perimeter = s+s+s+s++s+s....


Arthur's Area
This one went through a few different forms before we settled on one. King Arthur needs to know the area of each room in his castle. His floors are terrible! (It was probably white carpet put in by the previous owner who was a bachelor king and who didn't know better! ...ahem...I digress) As the story goes, the royal donkey, Rectangle, was accidentally let loose in the castle and he ruined the carpet in every room. King Arthur needs to know how much flooring to buy for each room on each floor of the castle so we have to figure out the area for Arthur. Now, how do we remember the formula? We know what the Biblical name for a donkey is (we also know not to say it in public) but if we need to remember how to figure out the area of a Rectangle, just remember the royal donkey named Rectangle who ruined poor King Arthur's floors. The Area= Side x Side. 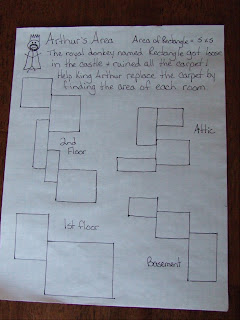 I drew these on graph paper if that isn't evident in the pictures.
I know this is the kind of thing you could never teach in a public school because of all the snickering that would occur, but my sweet children laughed more at the thought of a donkey running amok in the castle than they did at the formula. I love them for that!

*UPDATE*********
You can print off the worksheets or download them in PDF form if you'd like!
Arthur's Area
Peri's Meter

Email ThisBlogThis!Share to TwitterShare to FacebookShare to Pinterest
Labels: Homeschooling, My Guys