In the kitchen with BigBoy 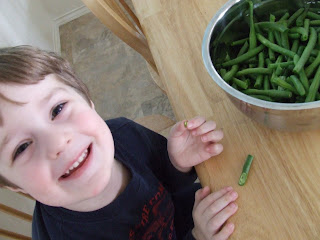 This little guy's favorite chore is snapping beans with mama. I snap off the ends and he snaps them in half. I can't even tell you how much money I am spending on green beans these days but it is totally worth it! He's just so cute! 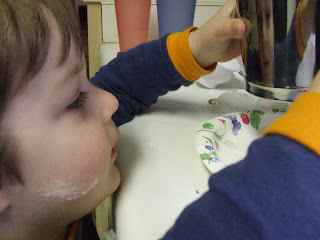 Speaking of cute, the children have discovered the delightful deliciousness of kiwi, but BigBoy's coming around was a little more difficult than the older ones. The Professor use to love kiwi as a toddler. Husband and I joked that if we had planted his diapers we could have had an orchard! Well, once he was a little older, kiwi became one of those way-to-slimy and messy foods and... it was green! Recently, Husband has been inspired by Jonny Bowden to try some new foods and decided that we should remake our acquaintance with the humble kiwi. BigBoy was not happy! He whined and moped until Husband gave him no choice but to try the tiniest little piece at which point he ran into the den and threw himself on the couch in tears and screams of agony. Husband asked, "Oh, what's the matter?" to which BigBoy responded amidst sniffles and waterworks galore, "I LIKE IT!!" Boo, hoo, hoo!

Email ThisBlogThis!Share to TwitterShare to FacebookShare to Pinterest
Labels: My Guys