So our living room is definitely wearing its new makeover well and we have settled back into our schooling space nicely. The kids do table work and couch work just like they did before but the addition of the maps on the walls and the art display adds a new feel to the space. Husband says it reminds him of an old newsroom, but I think that's just the clacking of the typewriter on the desk. That old thing has been getting a daily workout since we had it fixed up. 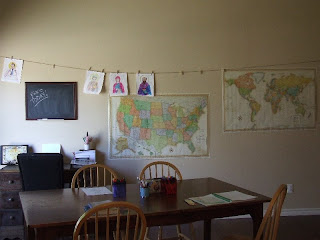 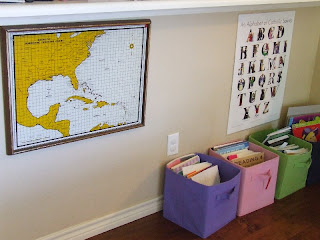 The book cubbies are working perfectly with the only problem being overcrowding but that's not a problem I mind! We also moved the hurricane tracking chart under the bar area which means that it is being looked at more frequently. (I think my son was actually disappointed that he didn't get to track Gustav into our area. He had visions of pretending to be Jim Cantore with his safety goggles on in the back yard.)

I am finding that there is a balance to be found in a large space like this. How much is too much? It is hard to make a large area feel cozy like a smaller space without it quickly becoming cluttered. I don't take a minimalist approach to decorating, but I am being careful what goes up so that I don't go overboard. So far, we like what we see.